Referrals and arrests at Elon rise from past years

Elon is the only school, among its peers, to show a percentage increase in all liquor, drug arrests and referrals categories 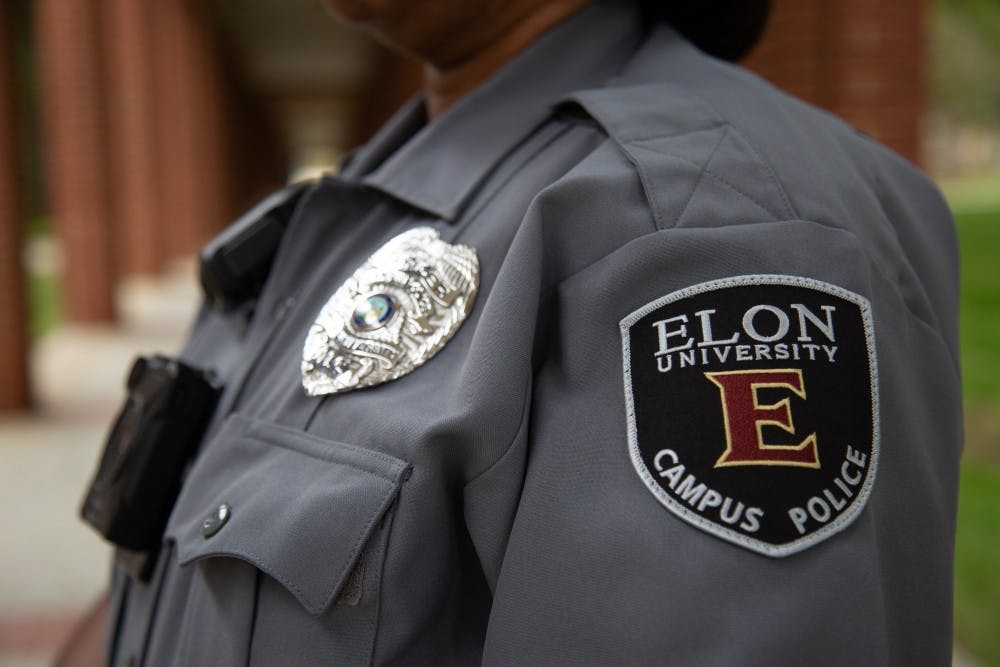 Photo by Anton L. Delgado | Elon News Network
When a liquor or drug law is violated, Elon University’s campus police officers have the choice to arrest a student or refer them to the Office of Student Conduct.

Arrests and referrals for drug and liquor related violations jumped at Elon University from 2016 to 2018. Elon is the only school among its peer institutions to see a percentage increase in all four drug and liquor categories, according to data from campus police departments, published in federally required reports.

The report also details rises in drug- and alcohol-related referrals, in which offenders are not arrested but instead referred to the Office of Student Conduct. In the same time span, the number of liquor-related referrals has steadily increased from 230 to 275, in addition to a growing number of drug-related referrals — increasing from 75 to 96 incidents.

Sgt. Joel Thomas, a community liaison officer with campus police, said this increase is caused by the substance abuse initiatives at Elon that preach the “see something, say something” phrase on campus.

“Some of the increase is going to be due to students calling. It’s not us getting out ... trying to catch people doing wrong,” Thomas said. “It’s students calling on other students and reporting this.”

Elon’s report, released Oct. 1, includes only aggregate data. It does not provide details on individual cases or whether students were involved.

From 2016 to 2018, there was a 12% total increase across all crime categories the university is federally mandated to report.

Last year, campus police reported no cases of crimes such as manslaughter, arson, aggravated assault, robbery and incest — however, it saw three cases of burglary, two cases of rape and fondling and one case of motor vehicle theft.

When compared to its 15 peer institutions, listed by the Office of Institutional Research, Elon is the only school to show a percentage increase in all four drug- and liquor-related categories.

Percentage change is used as a measure when comparing schools because raw numbers can be heavily influenced by schools’ location or student body size.

According to Thomas, the majority of incidents officers respond to are calls from residential assistants and anonymous tips from LiveSafe, a two-way communication app that puts a user directly in contact with campus police.

"I don't see a concern in the rise of the numbers … It's a good thing that students, faculty and staff are taking advantage of all the different ways to keep this campus safe. "

“I don’t see a concern in the rise of the numbers,” Thomas said. “I actually think it’s good because you are seeing students holding other students accountable for their actions. It’s a good thing that students, faculty and staff are taking advantage of all the different ways to keep this campus safe.”

In situations where drug and liquor laws are being violated, campus police officers at Elon and other peer institutions have the choice to arrest the individual or refer them for disciplinary action.

“What comes into play is the number of times we have to respond to a certain individual,” Thomas said. “If it’s the first offense, it’s usually a referral. But the more we go out there and the more there is an issue with that one person, things can change.”

Thomas says other influencing factors are the attitudes of individuals when officers arrive and the severity of the incident.

According to Thomas, the “majority, if not all” incidents in the arrest category end in citations, meaning there is no “physical arrest being made.” Either way, the incident would become part of both the individual’s criminal and academic record.

When students are arrested by campus police, they are also automatically referred to the Office of Student Conduct. The incident would become part of the student’s academic record, as opposed to their criminal one.

“Character development and personal responsibility are two aspects of the honor code. Students are expected to uphold the values in the honor system,” said Jenni Spangenberg, director of student conduct. “The legal system is separate from the university honor code and values.”

The reported number of referrals includes the number of arrests.

In most cases, the Family Educational Rights and Privacy Act requires schools to have written permission from a student over the age of 18 before releasing any information from their academic record.

Another federal law, the Crime Awareness and Campus Security Act, requires the publishing of the Fire and Safety Report. The U.S. Department of Education mandates “colleges and universities participating in federal financial aid programs to maintain and disclose campus crime statistics and security information.”

“The rise and fall of numbers doesn’t dictate what we do. It doesn’t change our policies,” Thomas said. “We continue to do our job, day-in and day-out, no matter what the numbers look like.”

Elon’s next Fire and Safety Report, which will include data from 2019, is expected to be released in October 2020. Thomas says future trends are “all up in the air.”

The program is either required or recommended by 12 of Elon’s 15 peer institutions.

According to EverFi, the organization that runs AlcoholEdu, over 230,000 college students in the U.S. took the course this fall.

Callie Kelly, coordinator for student wellness, was unavailable for comment.

From Oct. 21 to 24, SPARKS will be hosting events for National Collegiate Alcohol Awareness Week, a countrywide promotional campaign for substance education.