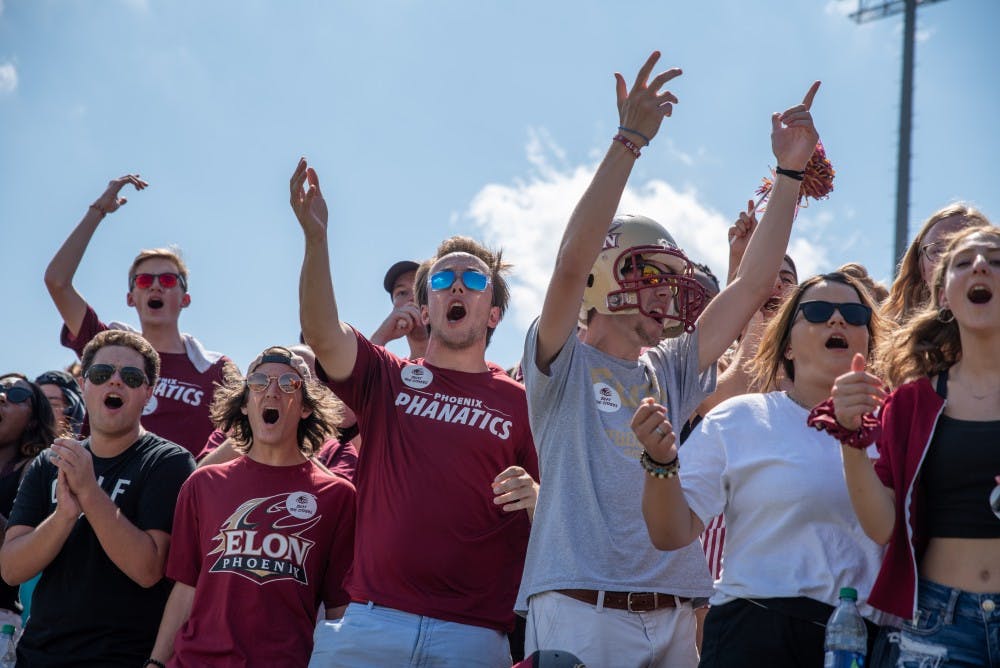 
Phoenix Phanatics cheer on the Elon football team against the Citadel on Sept. 7, 2019.

On any given Saturday morning, it isn’t unusual to find students at Elon University still asleep. However, some students can be seen gathering on Bank of America Drive outside of Rhodes Stadium as early as 10 a.m.

Some of those early risers are the members of Phoenix Phanatics, the official student support group for Elon Athletics. The student organization is designed to promote school spirit and attendance at Elon athletic events.

Founded in 2017, the group has accumulated dedicated members that have stuck together through the ups and downs of Elon sports. You can find the Phoenix Phanatics leading chants and cheering on athletes at sporting events.

This fall, the Phoenix Phanatics have focused on tailgating both at home football games and away games. The Student Government Association helped fund buses in collaboration with the Phanatics to send students to football’s opening game at North Carolina A&T.

students, some were members of the Phoenix Phantatics showed up at Elon University's volleyball game against the University of Towson on Sunday, Oct. 13.

The Phanatics provide free transportation, gear and food in order to advertise their events.

Junior Anna Daniel, co-president of the club, talked about her favorite part of being a Phoenix Phanatic.

“I’m always one to cheer. I love to get a little obnoxious, and it’s nice to have a group who’s right there with you,” Daniel said. “Just in terms of my confidence and just being able to be who I am and enjoy sports, it’s been really great to have them right there with me.”

At home games, the tailgates begin just after 11:00 a.m. and run until game time at 2:00 p.m. The Phanatics provide free food and activities to get students amped for the game. Not only are the Phanatics there, but many fraternities, sororities and other Elon clubs attend the tailgates. Tailgate popularity has grown in past years, thanks to the Phanatics.

North Carolina native and freshman Blake Dixon said he wanted to bring the competitive school spirit he had at Calvary Day High School in Winston-Salem to Elon.

“It’s really important for the college experience to go tailgating and go to the games. I wanted to find the organization that I could implement my type of experience into, and that was the Phoenix Phanatics,” Dixon said.

Dixon said he attends football and men’s soccer games more than anything else because they fit into his schedule better than other sports.

“It can be fun if you make it,” Dixon said. “That’s how I’m trying to approach Elon’s athletics. I feel like some people don’t make it as fun as it could be, and so I want to start a new wave of making it a fun experience rather than just people don’t show up to the games.”

The Phanatics have supported men’s soccer with free pizza at games, women’s soccer and volleyball with a casino night. Football and women’s basketball have always gotten the highest attendance due to successful tailgates and because the women’s team has earned a spot in the NCAA tournament two of the last three years.

Just last Sunday, the volleyball team took on the top-ranked Towson University Tigers at Schar Center with a 2 p.m. start time. While most students and community members stay in and watch football, over 300 students came to watch the match.

Sophomore Leah Daniel, an outside hitter on the volleyball team, loved the positive effect the crowd had on the game.

“Obviously, we couldn’t do what we do without the people supporting us,” Leah Daniel said. “In the games where we have more people come, it definitely shows because it gets us more energy and allows us to play at a higher level.”

The biggest event for the Phanatics this year came on Sept. 28 when football took on James Madison University, a rivalry matchup during Family Weekend that was bound to draw a large crowd. Crowds packed Bank of America Drive, and although Elon fell to JMU, the attendance and support from the crowd didn’t disappoint.

Thousands of community members, students and families came out to Rhodes Stadium in support of the Phoenix.

In addition, the Phoenix Phanatics have a public relations team that advertises all their upcoming events. Students can find daily posts on Instagram showcasing event themes and photos of the Phanatics cheering on their colleagues.

"We think it's a really good community to engage with, and if you're concerned about student spirit or you just love athletics, this is really going to the spot for you."

The account has generated over 500 followers and has accumulated consistent engagement from the Elon community. You can also find them on Twitter posting score updates and tearing down opponents.

“Our leadership right now is really focused on community building. We think it’s a really good community to engage with, and if you’re concerned about student spirit or you just love athletics, this is really going to the spot for you,” Daniel said.