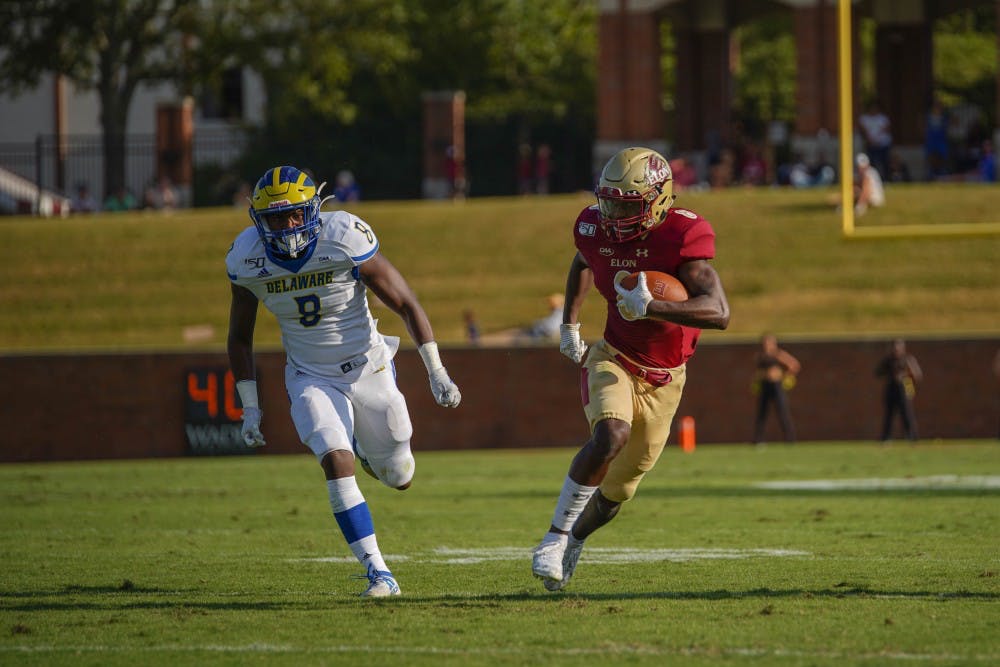 Elon Football (3-4) defeated the University of Delaware Blue Hens (3-3) 42-7 on Saturday, Oct. 12. This was the fourth time the teams met and the first time the Phoenix has beaten Delaware.

“This is a big game for us, because it's been every single week we've had something we've had, you know, one phase or one person, like it was me last week, that felt like we could have done better,” junior quarterback Davis Cheek said. “I think that when everyone sees the fact that we went out there and did our jobs and you have success like we did today, I think that that will go a long way.”

Elon started the game with a strong presence defensively. Strong pressure forced a punt deep from the Elon endzone to put them in great starting position at the Elon 42 yard line. Several solid rushing plays and two passes for nine and seven yards respectively put Elon in prime position to score.

Elon put in redshirt freshman quarterback Joey Baughman, and he converted with an 11 yard rush into the endzone to put the Phoenix in front.

Near the end of the first quarter, junior defensive back McAllister Ingram was ejected from the game for targeting Delaware quarterback Nolan Henderson. Elon was given a 15-yard penalty, but the defense came through and prevented the Blue Hens from converting. Henderson was hit in the head and did not return to the game.

The second quarter saw little action until a Delaware drive with 2:30 left in the half brought the Blue Hens to the Elon one-yard line. A handoff gone bad forced a fumble and an Elon recovery. The Phoenix chose not to take their timeouts with just over a minute left, and the second half ended with the Phoenix touchdown as the lone score, 7-0.

“We felt going in that we had to take what [their defense] was giving us and we had to be patient,” Head coach Tony Trisciani said. “So you know in the second half I think we wore them down up front, the more bubbles you throw and you get that ball on the perimeter, now guys are running sideline to sideline and they get tired.”

The third quarter started with a bang for the Phoenix. On the second Phoenix offensive drive of the quarter, Elon used a two-yard rush, and a 49-yard quick pass to senior tight end Matt Foster to score their second touchdown of the day.

Elon continued the offensive attack with a jet sweep handoff from Baughman to sophomore wide receiver Bryson Daughtry for the third Phoenix touchdown of the game.

On the next possession, senior cornerback Greg Liggs Jr. intercepted a Delaware pass, returning it for the fourth Phoenix touchdown of the day.

Senior running back De’Sean McNair padded the lead and increased the Delaware deficit to 35 points once again as he ran in his second touchdown of the day with 5:28 to go in the 4th quarter.

“It was great to see us go out there today and play well and do it for 60 minutes,” Triciani said. “We’re a hungry football team, and we were a frustrated football team, so you know we were really ready to come out here and play football today.”

Elon used the momentum that their offense provided to coast to a win, and improve to 3-4 overall and 2-2 in the CAA. They have a bye week next week, followed by a CAA tilt at the University of Rhode Island on Oct. 26.