Phoenix moves to 4-2 in CAA 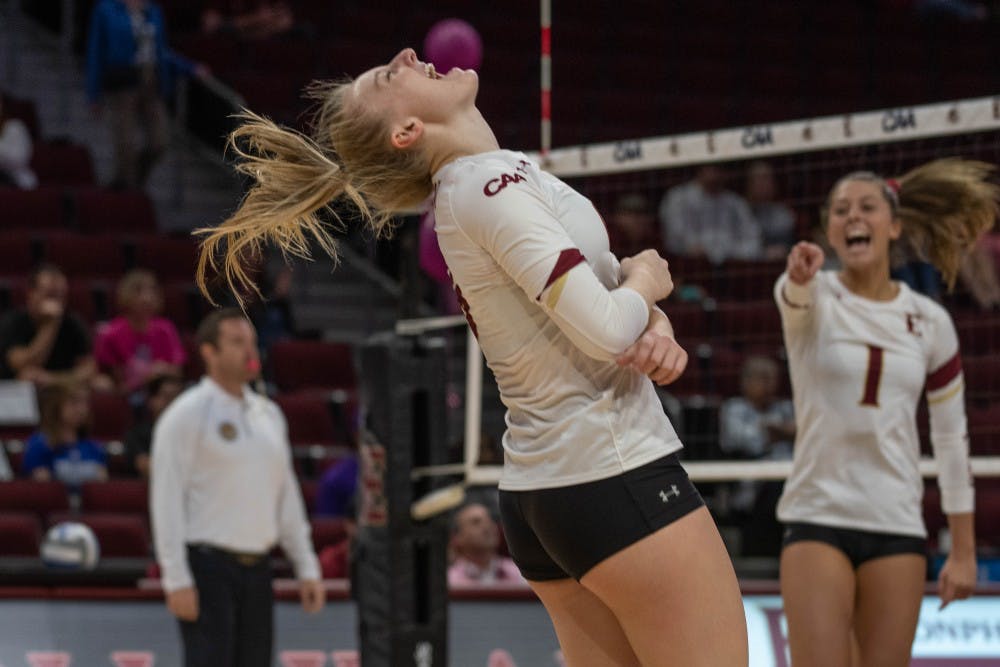 Elon volleyball (8-10, 4-2 CAA) defeated the Delaware Blue Hens (11-4, 3-2 CAA) in Schar Center on Oct. 12 in five sets after a competitive back and forth game. This was a bounce-back conference win for Elon volleyball after losing their past two previous conference games.

The Phoenix were led by senior captain Nori Thomas, and sophomore outside hitter Leah Daniel. Daniel had 22 kills, 11 digs and four blocks. Daniel has now scored double digit kills in 14 straight matches. Today was her second double-double of her career.

“She really stepped up and she started out strong," head coach Mary Tendler said. “Her confidence is really high. She worked all spring and summer to get better as a volleyball player and she did. She is so much different this year. She’s confident. She has a lot of different shots now and she’s so athletic. Obviously, she gets off and it's great," Tendler said.

Coming into today's game the Phoenix had lost its last two matches which were both conference games. The Delaware Blue Hens came into the match winning their last three.

With both teams taking a set the third was bound to be another competitive one. The first 12 points of the set were split between the two teams. The set was thight the entire way with Delaware eventually taking it 26-24. Delaware’s Bellinger would continue to have a great game and carry her team with 15 kills, two digs and three blocks. Daniel's incredible day seems as if it was only getting started. Daniel would finish the third set with 16 kills, eight digs and three blocks. Behind her was teammates Trowse who had seven kills, eight digs and a block and senior captain Nori Thomas with seven kills and two blocks.

“We kept battling at every point. So that was impressive. And our defense kept getting better and better,” Tendler said.