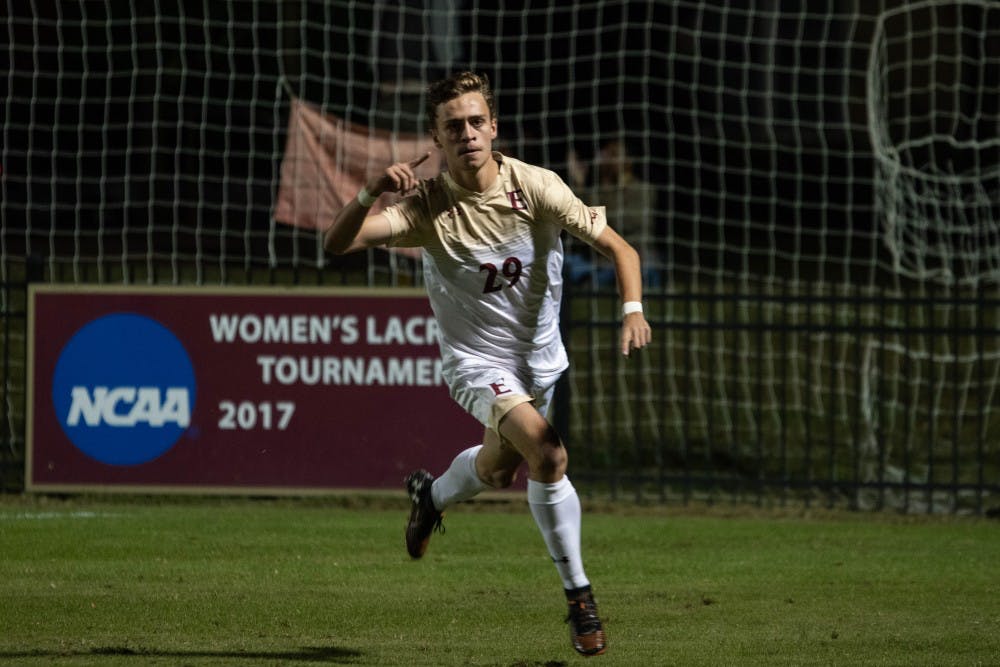 Upsets were in the air amidst a raucous crowd at Rudd Field, as the ACC powerhouse the Duke University Blue Devils (6-5-1) (2-3-0 ACC) traveled to Elon (5-7-1) (0-5-0 CAA) to take on the Phoenix on Tuesday night. The Phoenix downed the Blue Devils 3-2 in exciting fashion.

The Phoenix has played a home and away series since 2008 with the Duke. Tuesday’s win gave the Phoenix their second win in a series that the Elon trails 2-6-3.

The first half of the game was a battle of attrition, with both teams looking to edge past the other but coming up short. Elon looked sharp offensively in the first 20 minutes.

The best look for the Phoenix came from senior midfielder John Walden who scraped the top of the crossbar with a strike from distance.

The Phoenix found the advantage in the 39th minute when the Phoenix offense exploited a mismatch. Freshman Burl Sheppard found an opening against Blue Devil junior keeper Will Pulisic, and fired a ball in the net to put the Phoenix up 1-0 to end the half.

The Blue Devils started the second half looking to tie the game, with several shot attempts flying out of play.

Elon had an excellent chance to convert in the 67th minute, but could not find the net due to the excellent save by Pulisic. Phoenix freshman forward Tuki Tayali followed the shot with a second attempt that went just wide of the post.

Elon went ahead again in the 74th minute as redshirt senior Inigo Bronte converted a penalty kick to put the Phoenix up 2-1.

“It's always a 1 v.1 against the goalie, and you [are] just by yourself so you wanna keep calm,” Bronte said.

Tensions flared after the kick, as Bronte and a Blue Devil made contact, and the benches erupted. The players met at the center of the pitch and Sheppard had to be restrained by an official.

Duke found a way to tie the game again in the 82nd minute as Proch found the back of the net for his second goal of the night. Once again the Elon lead disappeared in front of their eyes.

Elon found the equalizer with the head of freshman defender Vemund Hole Vick. Freshman defender Kasper Lehm flicked the ball into a hoard of Elon players near the goal, and Hole Vick smashed a header into the left side of the goal to put the Phoenix up for the last time in the 88th minute.

"Just a feeling of having a last-minute winner is always great. Especially have had 16 shots versus five and I think we deserve it,” Hole Vick said

The crowd erupted with the goal. Reeves praised the raucous crowd in attendance at Rudd Field.

"The crowd definitely played a part in it. They got behind us, they didn't give up on us."

As time ticked on, Duke could not muster a last-minute goal, and Elon came up with their biggest win of the season.

“You know, it's nice to be on the right side of a 3-2 win and I give a ton of credit to our group for the way they prepared, the way they had full belief in what we were doing, And then the way they execute against a really good Duke team,” Reeves said.

The Phoenix return to conference play against Northeastern on October 19th at Rudd Field.

The studio came to life through the work of Campus Recreation & Wellness and the Department of Performing Arts and was inspired by the direct benefits that Pilates provides to dancers.