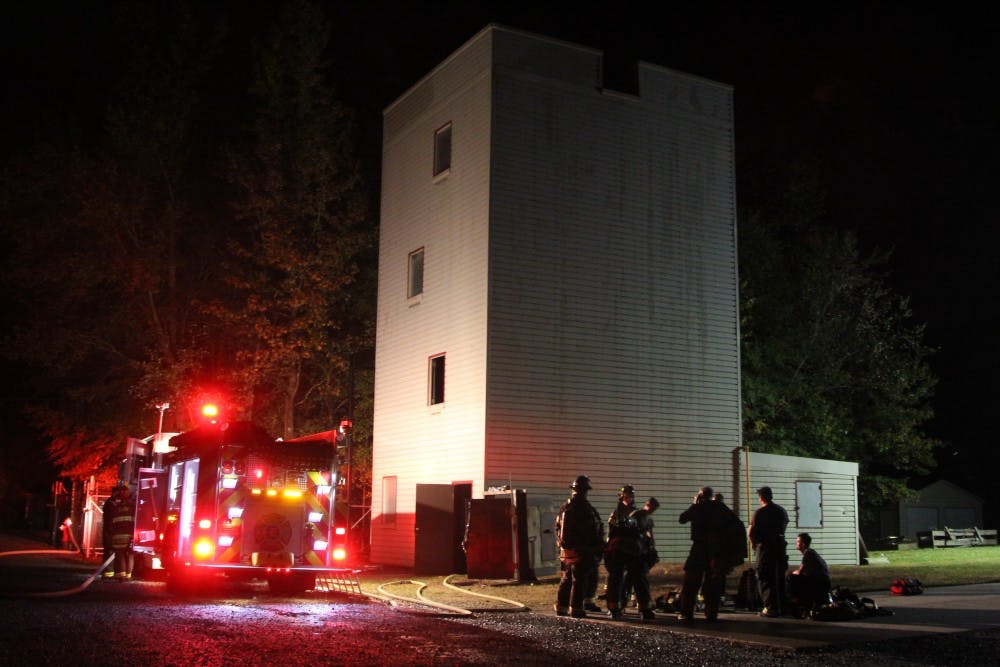 
The Elon Fire Department hosted its last "fire scene set up training" of the year by the training tower, located near the Station at Mill Point parking lot, in the evening of Tuesday, Oct. 22.

The Elon Fire Department held a “fire scene set up” training in the evening of Tuesday, Oct. 22 at its training tower at the corner of Ball Park Avenue and Johnson Street, located by the parking lot of the Station at Mill Point.

According to Training Captain Jacob Flint, the department holds 10 of these fire scene trainings a year — this is expected to be the last one until 2020.

Of the 20 firemen that participated in the training, four were Elon University students.

Junior Chris Durant, who majors in environmental and sustainability studies, is a new member of the department.

"Tonight we were practicing interior communication," Durant said. "We've got myself and a bunch of new volunteers, young people, so we are trying to get everyone comfortable with the air packs and being on the inside of the building during the fire."

Durant hopes to be a fireman after graduating from Elon and currently volunteers four to 10 hours a week.

"The hardest part about these drills can be communicating well and taking it very seriously, even though it is a drill. As a drill, no one is in real danger of getting hurt, but you got to take it seriously nonetheless," Durant said.

Alongside Durant was fellow junior Will Cooper, a public health and statistics double major, who has volunteered for the department since his freshman year.

Cooper has participated in these drills "more times than [he] can count."

"These drills are so important because it gets everybody in the mindset of what it is like to go into a very smokey environment," Cooper said. "When you get in there, you can't see your hand in front of your face. It's extremely dark and you have to get used to using your senses and learn how to be calm on scene and fight fire effectively."

As a member of the Army ROTC on campus, Cooper will serve four years in the military before pursuing what he said is his dream of being a firefighter.

"Elon as a community gives so much to us. This is was the best way I could give back," Cooper said.

The town of Elon Fire Department holds trainings twice a month every other Tuesday to simulate search and rescue situations in classrooms, buildings and cars.