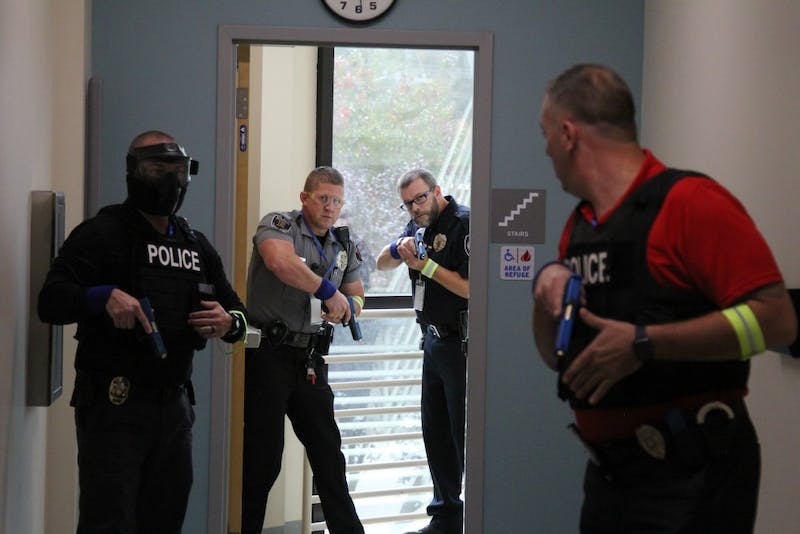 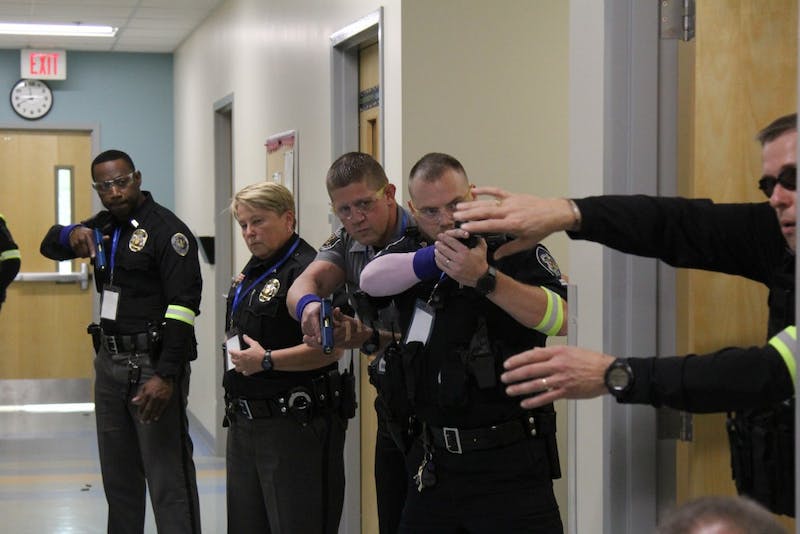 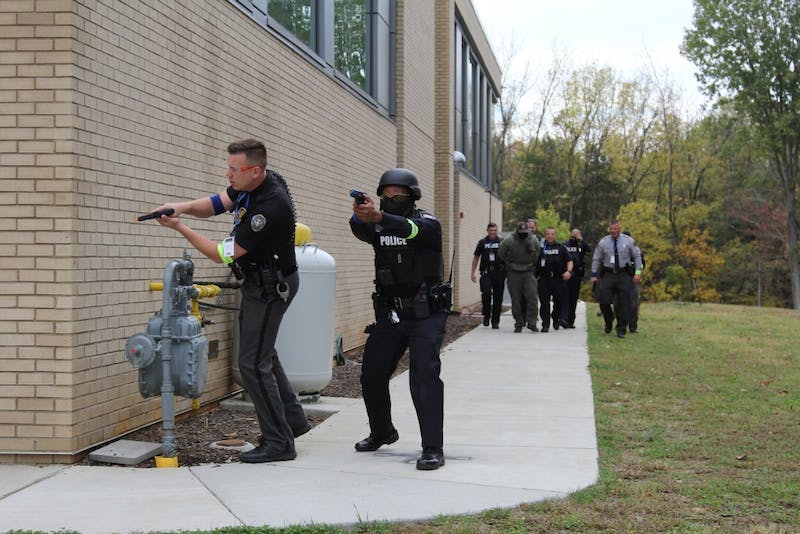 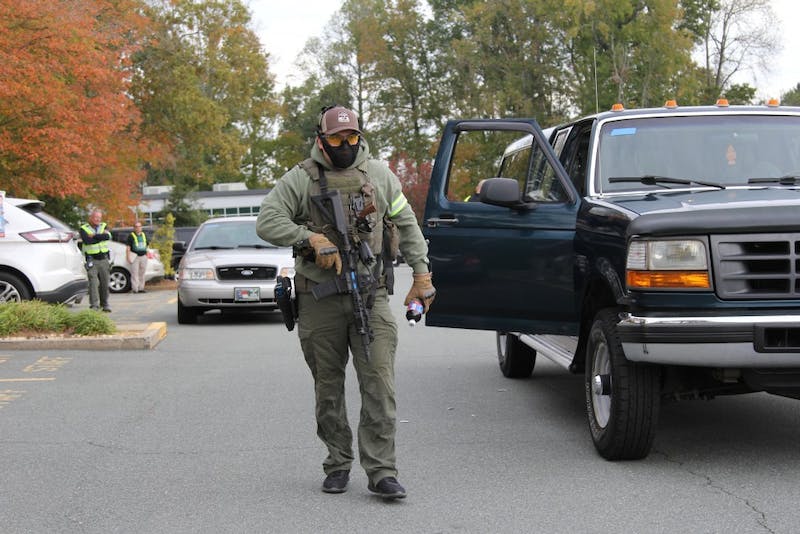 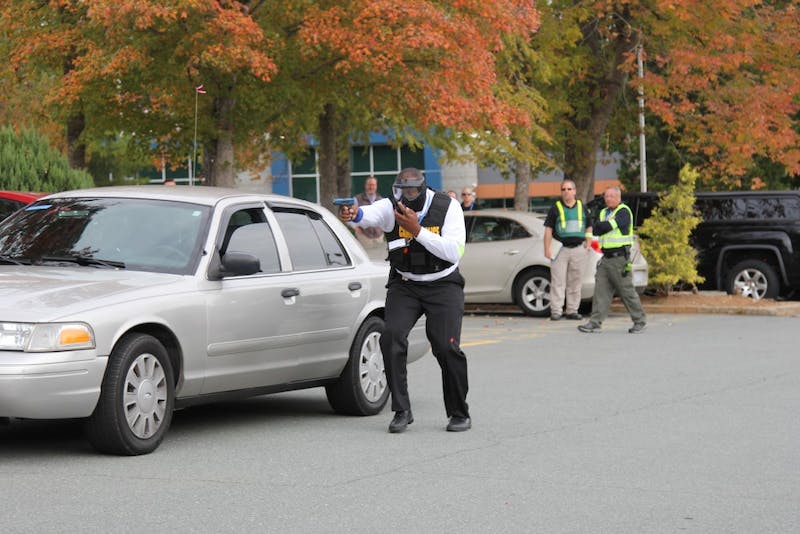 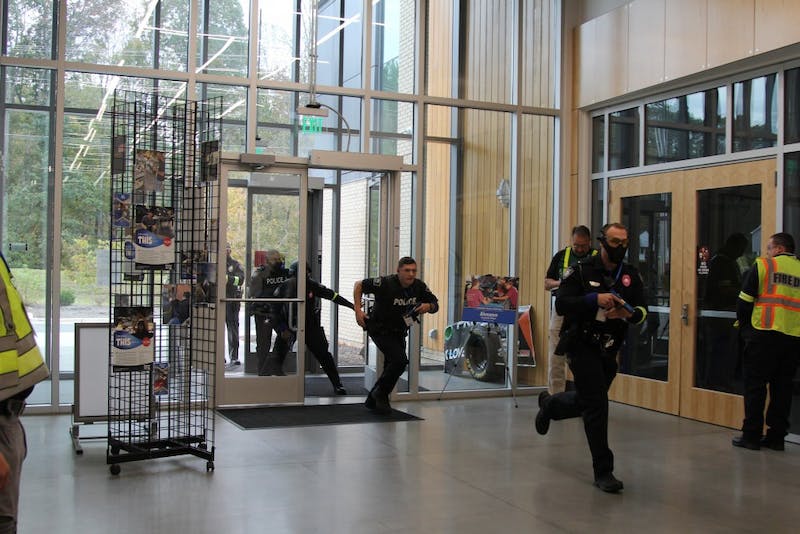 Warning — Some readers may find the following images and video disturbing. View discretion is advised.

GRAHAM — Blank shots rang out on the campus of Alamance Community College on Friday, Oct. 25 as town of Elon and Elon University Campus Police participated in a county-wide active shooter training.

The training exercise involved three people portraying active shooters, who were then dispersed throughout the campus and were given free roam, to most accurately simulate a real-life emergency.

First responders were systematically released to respond to the situation based on how long it would take them to actually arrive on-scene from their real locations.

The drill also included volunteers who played victims of the shooting, sporting makeup to simulate bullet wounds. This allowed first responders the ability to not only practice neutralizing the threat, but also getting victims medical attention.

Patrol Officer Ryan Gerner, who was a firefighter and worked in Emergency Medical Services before becoming a police officer, said it was a good opportunity for him to get experience.

Volunteers also were able to practice a simulated lock-down drill. The practice is often done in schools across the country, but rarely is it done with someone portraying an active threat.

The last active portion of the training portrayed a hostage situation, which both a member of campus and town police played an active role in. A negotiator was tasked with talking the shooter out of a locked room. Gerner acted as the arresting officer in the simulation.

Gerner says he hopes a training can be held on Elon’s campus soon, and that people would benefit from understanding how a situation would be handled at Elon.

Gerner offered tips for civilians from a law enforcement perspective on how to best assist first responders in an active shooter situation.

“Make sure you show us your hands and identify yourself as a student, and follow directions as fast as possible so we can get you to a safe spot. If you do have information… tell that law enforcement officer as fast as possible. Allow yourself to be accounted for… if they give you a safety point go there and stay there so we can keep track of where everybody is as much as possible,” Gerner said.