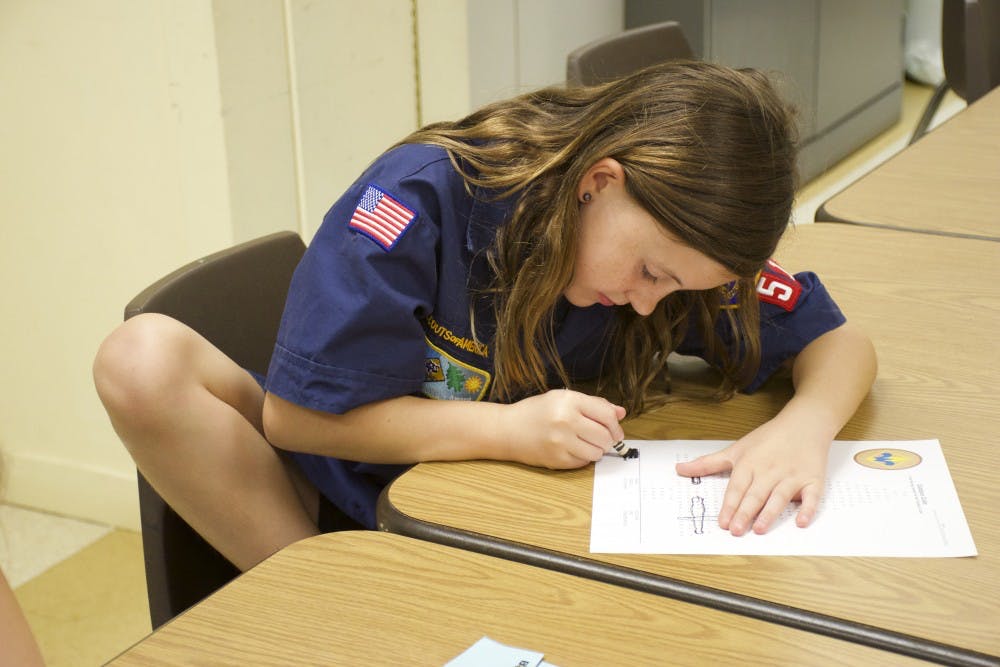 Photo by Lily Blake | Elon News Network
Cub Scout Taylor Rasmussen completes a word serach as one of her activites in her weekly Den meetings. These meetings always focus on integrating the scout laws into different tasks.

For over 40 years, the town of Elon has been the home of Scout Troop 51. From the colorful classrooms of Elon Community Church to the campgrounds of Linville, North Carolina, they have “trained youth in responsible citizenship, character development and self-reliance,” according to the Boy Scouts of America website.

Joining the ranks this year, in line with a national shift, are dozens of girls in the Elon area.

While there have been opportunities for girls to get involved in specific aspects of Boy Scouts since 1971, the national organization announced in 2017 that they would start opening their curriculum to girls.

“I’ve seen nothing that develops leadership skills and discipline like this organization. It is time to make these outstanding leadership development programs available to girls,” Boy Scouts’ National Board Chairman Randall Stephenson said.

Boy Scouts not just for boys

Elon’s Troop 51 contains Cub Scouts Pack 4051 and Scout Troop 6051, both sponsored by Elon Community Church. The Cub Scouts group contains scouts from kindergarten until halfway through fifth grade when they transition to programs where they can participate until they are 18 years old. Dens, which are sub-groups of the Cub Scouts dependent on age, are coed. But once they progress into scouts, the troops are separated by gender.

“It’s not coed; there is strictly a troop for boys and troop for girls. Girls are doing the exact same program as boys. There aren’t any modifications… girls are just having a new opportunity to do something that previously wasn’t available to them,” Scoutmaster Carol Plaster of Troop 6051 said.

For Plaster, Boy Scouts has been a part of her life since childhood.

“Both of my brothers were Boy Scouts, and I have three sons involved in the program, so scouting has always been something that I have been involved in,” Plaster said.

When Boy Scouts announced that they were going coed, Plaster transitioned to scoutmaster of an all-girls group.

“When they made the announcement [that Boy Scouts was going coed] it was a Thursday, and Troop 51 was setting out on a camping trip,” said Chris Greggory, Cubmaster of Pack 4051. “At this point, there were already 17 women on the trip with them whether they were moms or female supervisors… we have always had female leaders and different parts of the scouting program has been coed since the 70’s.”

Girls have always been allowed to participate in Venture Scouts, which are crews similar to the scouts, but you do not have to be affiliated with a troop to participate.

Once the BSA announced their switch to coed scouting, Greggory immediately approached the Elon Community Church council about integrating the curriculum, and they accepted without hesitation.

Plaster works at a Boy Scouts sponsored camp and enjoyed seeing the increase in female participants after the switch.

“It was really cool to see their excitement for the program and the kind of merit badges that they chose to do,” Plaster said. “I had girls taking welding, rifle shooting and all different kinds of things. It was really neat to see them get out there and try new things.”

Innerworkings of the scouts

Troops have weekly meetings where they work toward rank advancements, but at least once a month, the scouts set out to put the skills they learn to the test. They not only go on hikes and camp, but they do other community events and activities. When on an outing, the troops always try to embody the scout law and oath — codes of ethics scouts follow throughout their time in the program.

“[The cubs learn how to use a] pocket knife, tie knots, build a shelter in the woods, how to make a campfire, how to fish, how to stay warm, how to stay dry, but a lot of it too is developing whatever framework it is for their own moral code or spirituality or religion and that’s going to look different for each scout,” Greggory said.

No religious affiliation is required to be a member of Pack 4051, however, that isn’t to say there isn’t a rule at the national level.

“Unfortunately, there is a requirement of some belief in a higher power [from BSA],” Greggory said. “That is a BSA policy that I hope is changed… but for Pack 51 and certainly for our church, that is not a requirement.”

In the end, Greggory just hopes that involvement in Boy Scouts will help the scouts establish a good moral compass for how they want to guide their life.

“We have two things that we really try to instill. One is the oath and one is the law of scouting,” Greggory said.

Moral character, concern for others and good physical health are the three qualities Greggory hopes his cubs develop from involvement in the program. They implement ethics and respect in everything they do from the classroom to the campgrounds.

“When we take them camping, we leave everything exactly as we found them. You know, there is a saying that we, ‘take only pictures and leave only footprints,’ everything else stays where it is,” Greggory said.

This past summer, Pack 4051 hosted a movie camp where the cubs recorded and edited a recruitment video for its troop members to show friends as a way to fulfill rank advancements.

They also hold an annual Pinewood Derby, where the cubs get to design and race their own miniature wooden cars made from simple materials. It’s easy to see the volume of activities and opportunities for scouts to get involved, “there’s always a place to find a home [in Boy Scouts],” Greggory said.

"it's great that now girls are going to have the opportunity to try a lot of things that they haven't gotten to do before and just have another opportunity to grow and flourish."

At the end of the day, this new form of inclusion in BSA doesn’t change the purpose of scouts, it just makes the organization more diverse and inclusive.

“I want them to become confident leaders and good citizens,” Plaster said. “It’s great that now girls are going to have the opportunity to try a lot of things that they haven’t gotten to do before and just have another opportunity to grow and flourish in a different and new way.”

Even though the demographic has changed, there is one thing that hasn’t changed: what scouts are at their core. Just as the scout law says, a scout has been and always will be trustworthy, loyal, helpful, friendly, courteous, kind, obedient, cheerful, thrifty, brave, clean and reverent… regardless of gender.