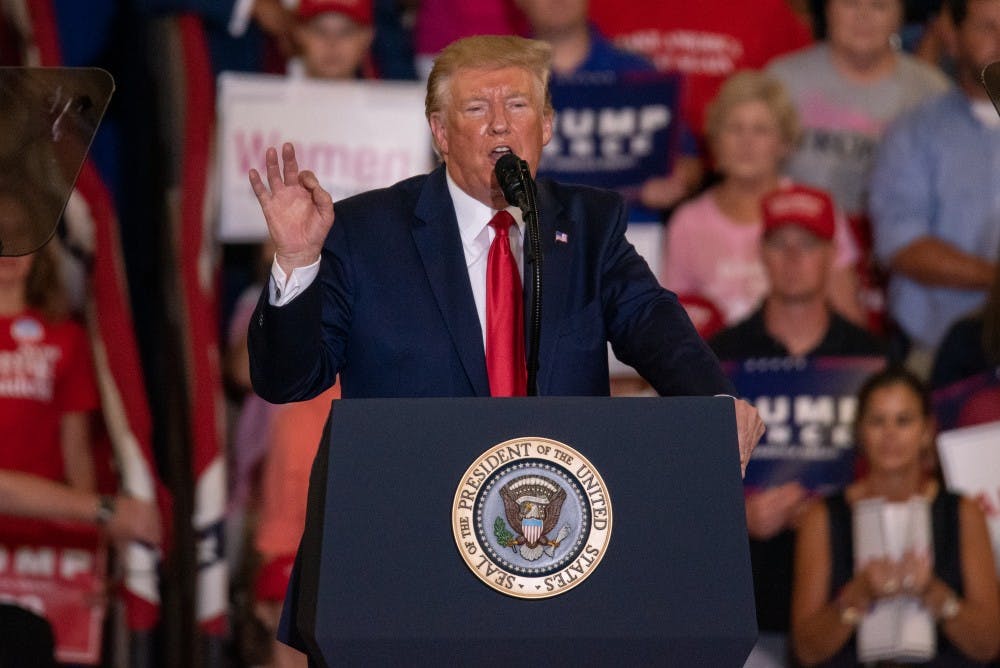 
President Donald Trump speaks to the crowd at a rally supporting Congressional candidate Dan Bishop in Fayetteville, NC on Sept. 9, 2019.

When talking about impeachment in any sense, it is important to focus on the fact that impeachment is a legal issue, not one based in politics.

Impeachment does not mean that a president will be removed from office; it means something they did violated the oath of office.

To best understand the motivation behind President Donald Trump’s impeachment inquiry, it’s important to know some of the people involved. These include Joe and Hunter Biden, Volodymyr Zelensky, Trump and the American people.

The interest in impeachment started because of a phone call. Trump called Volodymyr Zelensky, president of Ukraine, to discuss issues concerning foreign relations with Ukraine and Russia, as well as a closed Ukrainian investigation into Hunter Biden’s work while his father was the vice president of the U.S.

The prosecutor working Hunter Biden’s case found no foul play, and the case was closed. That being said, Trump is insisting that Ukraine reopen the case. Additionally, during the phone call, he told Zelensky that it would be a “favor” for him to investigate the impact that Ukraine had on the Russian collusion in the previous election.

While all of this is happening, Trump is dangling foreign relations agreements over the head of Zelensky to make him compliant.

Trump has not taken the impeachment inquiry lightly. He attacked Democrats such as Speaker of the House Nancy Pelosi and House Intelligence Committee Chair Adam Schiff with petty, vengeful comments. In a speech at the Values Voter Summit, he questioned Pelosi’s patriotism and made snide comments about Schiff’s appearance.

Americans are affected by issues and turmoil in the government. We are unable to make direct change, and we put our fate in the hands of politicians. We often look to our government for examples of leadership and exemplary behavior. When our president acts unlawfully and goes against the oath of office, it raises questions about who we are trusting to run our country.

Not even the president is above the law, and the diligence of this investigation is proving that. If Trump is using the power of his presidency to conduct relations as he would a business deal to get what he wants, we must stop that abuse of power.

We must hold Trump accountable, as he is the president of the United States, and that is exactly what this investigation is doing. As Americans, it is our duty to support the pursuit of truth in this investigation. We must remind him this is not Trump’s America; this is our America.