Kodi Garcia is setting the standard for Elon volleyball 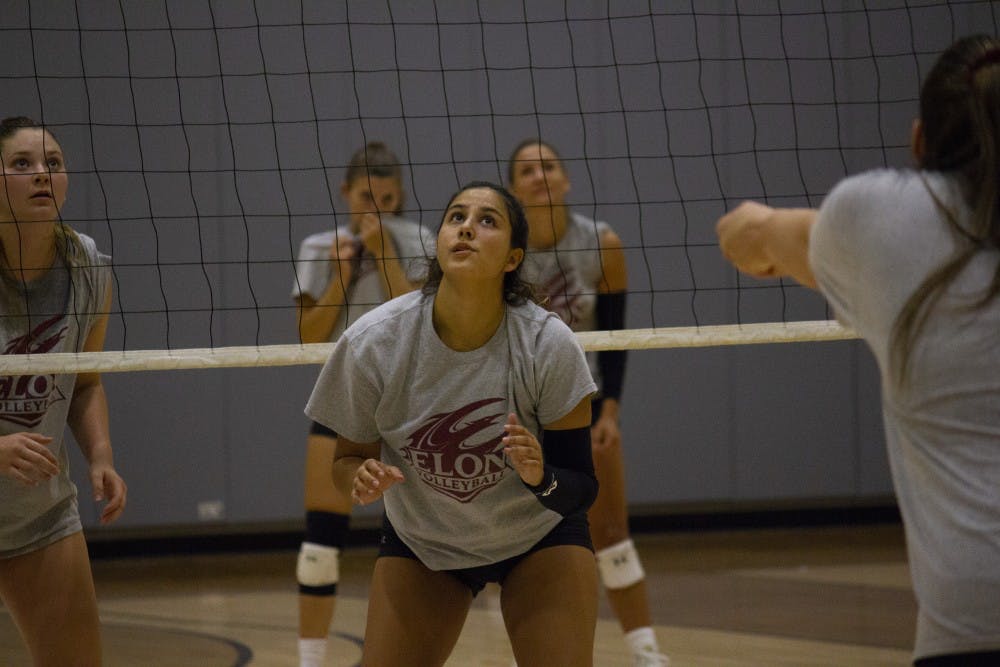 Photo by Alex Reynolds | Elon News Network
Junior setter Kodi Garcia during a preseason practice on Friday, Aug. 23. Garcia approaches every practice as if it were a real game.

The setter position is one of the most valuable in volleyball. It requires fast feet and quick reflexes but above all else, the setter needs to lead the offense.

“People compare the center position in volleyball to the quarterback position in football. The setter makes a lot of decisions on the volleyball court [such as] who to set and what formation to go into. And they’re kind of like that coach on the court,” said Mary Tendler, Elon University’s head volleyball coach.

is the most assists in a single season set by Kodi Garcia in 2017.

Elon volleyball’s setter Kodi Garcia, a junior, has played the position since she was eight years old. Like most young volleyball players, she started by trying to become an outside hitter. The outside hitter is the point scorer, the big hitter, the player that gets all the recognition. However, it was around this time that Garcia made a realization that would change her volleyball career.

“At first I was like trying to be an outside hitter. But then I was like I’m not getting the ball as much as I want to get the ball, and setters get the ball at least every play,” Garcia said. “I want to be that person that makes the biggest impact on the team.”

Twelve years later, Garcia is now the predominant setter on a Phoenix team poised to make a championship run. In only two years, Garcia has accumulated 2,089 assists, including a school record 1,279 in 2017 alone. Garcia has also credited 18 double doubles, 10 or more digs and assists, and multiple conference honors including Colonial Athletic Association (CAA) All-Rookie team in 2017.

Despite the honors and the presumed role as the lead setter for the Phoenix this year, Garcia still understands the expectation for a player in her position.

In her time at Elon, Garcia has set up some of the best hitters in Phoenix history including Sydney Busa ‘18 and Kam Terry ‘19, two players who rank fifth and sixth respectively on the all-time kill list with over 1,300 career kills each.

Garcia recalled that even as a freshman, the veteran hitters would instruct her with constant feedback on where the ball needed to be at all times. She said it was the standard Busa and Terry held that allowed her to become the player she is today.

“I would just throw a ball up and they would be cranking it in the court. They were such good players and I think it really changed my game looking up to them and seeing how they worked all four years and it just made me a better player,” Garcia said.

Though the junior has already made history, she still works as tirelessly as she did freshman year.

Garcia said that in spring 2019, she felt like she hit a turning point. She looked at the way that she was training and kicked it into high gear. Garcia began to train more on her own time to improve her hand skills and footwork. This dedication off the court reflects her mentality during practice where Garcia brings intensity and focus to an already enthusiastic Phoenix team.

career assists by Kodi Garcia in only two years of playing with the Phoenix.

The offseason training Garcia has done has not gone unnoticed by Tendler and the coaching staff. They said the setter continues to get better and better. Tendler noticed the biggest improvement in Garcia’s game is her ability to lead and communicate with her hitters and passers. This skill is extremely valuable this year for a less experienced Phoenix team that has added five new players to its roster.

“If a hitter makes an error, they want the ball back and [Garcia] wants to set them again. She knows what to say to her passers to get them to pass a good ball to her,” Tendler said. “I just think she’s better because she knows her teammates better and she understands what to say and what not to say to them.”

Garcia uses the high standard that she sets for herself to instill a strong work ethic for her younger teammates. Garcia is constantly pushing her court mates and her fellow setter in practice to strive for perfection and treat every point as if it’s the winning point.

The team starts their season with an away tournament in Moon Township, Pennsylvania where they will take on McNeese State University, Robert Morris University and Manhattan College.

Garcia is approaching the upcoming season with the same fire she has in every practice and the young team is buying in. Despite the team being projected finish eighth in the CAA. However, both Garcia and the team are ready to defy expectations.

“My mindset is it’s one game at a time, one win at a time. But I want to win a championship. I think all the girls on our team have that same mindset too and we’re all about that. Like our group chat name is ‘future CAA champs’ we have that mentality and we’re putting in the work,” Garcia said.