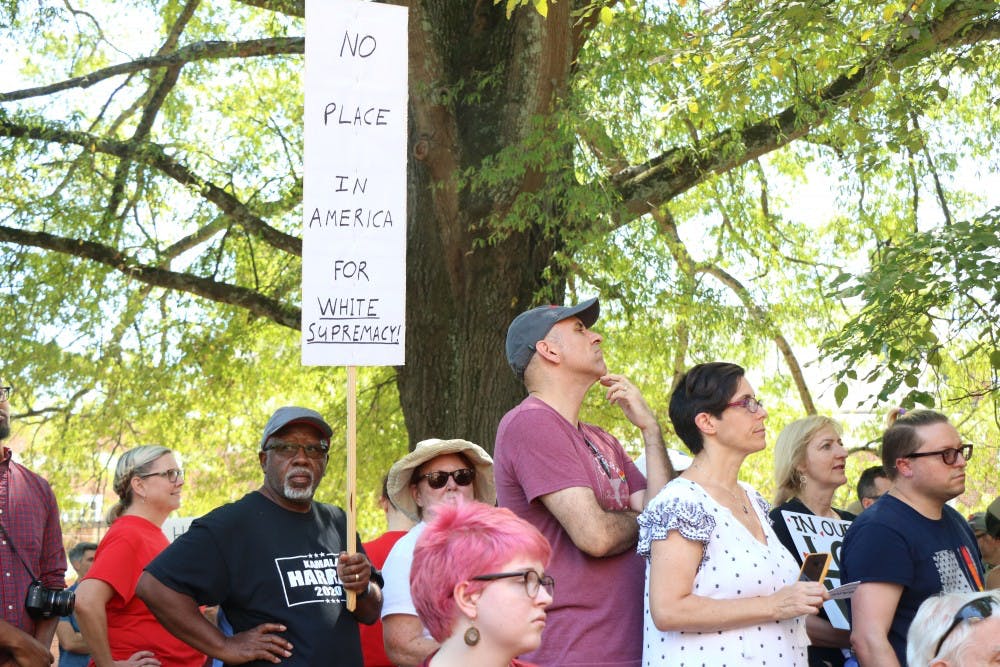 Photo by Maggie Brown | Elon News Network
Protesters lined up at the Hillsborough County Courthouse for the Hate-Free Hillsborough March.

The march for a "Hate-Free Hillsborough," was a direct response to the confederate flag demonstration last Saturday, Aug. 24, by the Loyal White Knights of the Klu Klux Klan.

The KKK told Spectrum News in Raleigh they would be making an appearance at Saturday's rally but they did not attend. Hate Free Hillsborough, the organizers of the march, says they believe today was a win.

The Orange Sheriff's Department investigated the rally last weekend and is planning to issue a warrant for two members at the event who were in possession of guns. They have not identified the men holding guns yet.

The morning of the event, many residents found promotional flyers to join the KKK in their yards and driveways.

Dani Black, resident of the West Hillsborough neighborhood, said she went out for a morning run by the cemetery and when she returned she found the flyers.

"You just do not even know who you messed with," she said when she picked up the flyer. A couple hours later, she was marching right back by the cemetery, with more passion.

The community says tensions have been building in the area for quite some time. Flag demonstrators from Alamance County have been frequently waving confederate flags around the Hillsborough County Courthouse.

Ben Braggs has grown up in Hillsborough all his life and is an executive chef at James Phramacy. It is right across from the courthouse. He's watched flaggers protest right outside his business and on the steps of the courthouse.

"They want people to be agitated and be just as hateful as them, but from a business standpoint, standing your ground is what needs to happen."