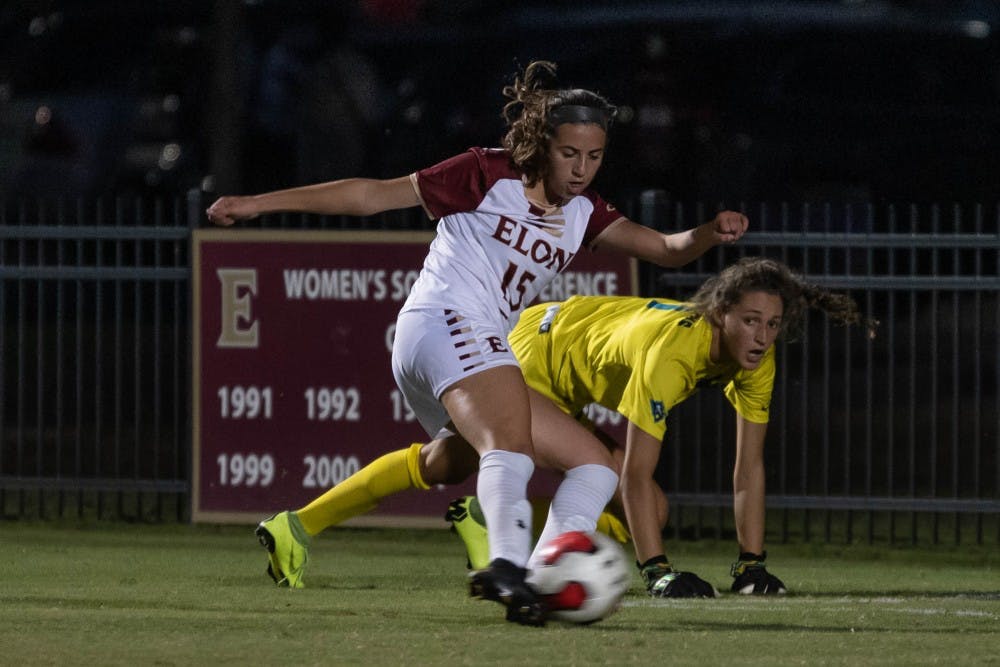 Elon Women’s soccer (7-2-1) defeated the UNC Wilmington Seahawks (4-4-0) 3-1 on Thursday night. They looked to come away victorious against the former Elon head coach Chris Neal who is now in his second year at the helm of UNCW.

The battle of the birds produced an exciting first half, with the Phoenix and the Seahawks in a back-and-forth battle in the first 10 minutes. Around the 20th minute in the opening half, a fire lit under the Phoenix, and its offense went to work.

Elon head coach Neil Payne turned to freshman forward Jessica Carrieri on his bench. She immediately made an impact and scored with an agile move around the Seahawk keeper in the 31st minute to score.

“She’s such a threat to the opponent that you have to pay attention to,” Payne said. “And the one thing that she’s doing constantly is that she’s consistently doing is she’s just changing the outcome of the game.”

The goal would take Elon to the half on top of the Seahawks 1-0.

The Seahawks opened the second half looking to attack. Neither side broke through until the 68th minute, when UNCW junior midfielder Audrey Harding fired the ball into the top corner past Elon freshman keeper Katrin Hauksdottir.

With the score knotted at 1-1, the Phoenix looked to find the equalizer with time running down.

Elon had prime positioning to score in the 80th minute and made it count as senior forward Taylor Paradoski snuck one past the star UNCW junior goalie Sydney Schneider to make it 2-1. Later in the 87th minute, Carrieri provided the dagger to put the Phoenix up 3-1. It was her second goal of the night and second straight game with two goals.

“We just want to show everyone [what] we got, and we got the first win so we’re just really looking forward to the next game,” Carrieri said.

With this win, the Phoenix secured its first-ever victory against the Seahawks, and improve to 7-2-1 on the year, and 1-0-0 in the CAA on the season. This is the second time in three years Elon has started the season with a 7-2-1 season, doing it in 2017 before finishing the season 9-6-4.

The Phoenix travel to Hofstra on Sunday to take on the Pride. They are back in action at Rudd Field on October 3rd against William and Mary.