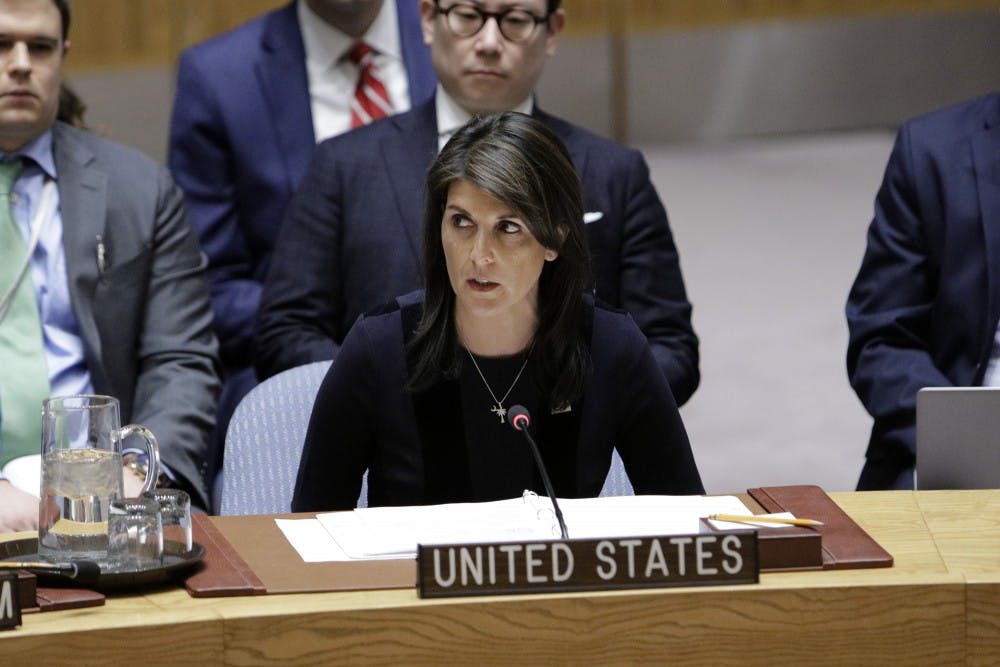 Nikki Haley, then-U.S. Ambassador to the United Nations, addresses the Security Council in an emergency meeting at the U.N. headquarters in New York, on March 14, 2018. Photo taken by Li Muzi | Tribune News Service

If Nikki Haley stands not for human rights, what does she stand for then?

One of the answers would be Zionism. Her dedication to the state of Israel and disdain for Palestine has been well documented during her time as United Nations ambassador. One of the lowlights of this has to be her praise for Israeli “restraint” on a day when the Israeli Defense Forces killed 62 Palestinians. Another would be her subsequent walk out of the U.N. Security Council Chamber as Palestinian ambassador Riyad Mansour began his statements. Other lowlights include her defense of the U.S.’ decision to cut all funding for the U.N. Relief and Works Agency for Palestine Refugees, withdrawal from the U.N. Human Rights Council due to “bias against Israel” and thinly-veiled threat that the U.S. was “taking names” of those who voted against their position of Jerusalem being the capital of Israel.

Another plausible answer would be U.S. imperial ambitions, with a major target being Venezuela. Her attempts to undermine Venezuela’s Nicolas Maduro were done by leading the charge to decry Maduro’s government as illegitimate, not because it was undemocratic, as she has no problems cooperating with dictators (Erdogan of Turkey, Sisi of Egypt etc.), but because it was a country that was strongly against U.S. foreign investment and imperialism.

An additional theory would be placating Saudi Arabia, as during her time trashing Venezuela, Haley was actively supporting the territorial ambitions of Saudi Arabia, including the Saudi’s genocidal war in Yemen which has an estimated death toll of 17,729 civilians as of 2019. This blindness to U.S. culpability in atrocities whilst condemning other nations for similar crimes cannot be explained by sheer ignorance. Plain and simple, it is malicious hypocrisy.

Read the column from a member of the College Republicans.

A final possibility is simply wishing to go to war with Iran, as Haley is also guilty of beating the war drums against Iran for much the same reason as Venezuela. This is not due to her or the U.S.’ values, but because it is a force against American ambition in the Middle East. You can see this in Haley’s claims in September 2017 that Iran had “been caught with multiple violations over the past year and a half” and that Iran also had “not allowed inspectors everywhere they should look.” These claims were debunked by Ilan Goldberg, the Iran team chief in the Pentagon under Barack Obama, decrying them as “dishonest in many ways.”

In the end, what does this tell us? Some may say that the blurb was put up by some Elon employee with little thought of its implications. But to that I counter that this blurb is emblematic society’s willingness to glaze over people who have caused suffering that we cannot easily see. This willful ignorance by Elon should not continue, and I hope that change for the better occurs soon.