Three charged after protests outside the Chatham County Courthouse 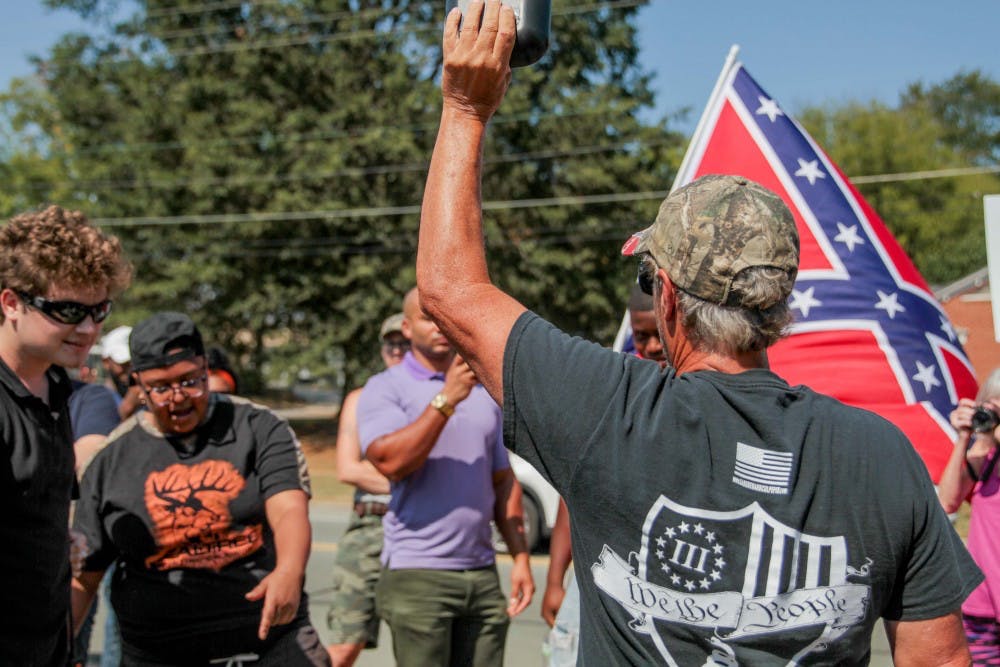 
The back of Steve Marley, member of Alamance County Taking Back Alamance County, a confederate pride group in the area protesting at Pittsboro on Saturday.

This article and some video included in the article contain profane language.

PITTSBORO — Confederate flaggers and anti-hate activists protested outside of the Chatham County Courthouse in Pittsboro on Saturday as a response to the Chatham County Board deciding to remove the confederate monument in front of the courthouse this week. Members of the Heirs of the Confederacy, Virginia Flaggers, Alamance County Taking Back Alamance County (ACTBAC), North State Flaggers and the League of the South gathered on public streets, waving confederate flags and protecting "southern heritage."

Robert Ronald White Jr., 72, of Siler City was arrested for assaulting an officer according to a police report from Chatham County Magistrates Court. The officer said he touched him twice. White says he was not there to protest but drove by the flaggers and wanted to stop and show his support. Once he stepped out of his car, he says an activist was yelling obscenities at him which upset him. He claims he had a bad leg, and brushed the officer twice during the incident. Daniel Hosterman, local photographer, claims he was trying to assault him.

That's an interesting interpretation of events. In reality, he was trying to get out of his truck to assault me and tried to go through a cop to do it.

This is not him "tripping and falling", it's him exiting his vehicle and lunging in my direction while being restrained. pic.twitter.com/CzxbLVoVn5

Woody Elvin Weaver Jr., 64, from Fuquay Varnia was charged with Simple Affray, according to a press release from the Pittsboro Police Department. He arrived to Pittsboro at 9 a.m. as a confederate flagger and was charged later that afternoon. He said he often travels on the weekends to participate in flaggings close to him. Devin Michael Ceartas, 52, from Chapel Hill was also charged with simple affray. According to his twitter he was an anti-hate protestor.

Earlier in the week, a large confederate flag was erected on private property across from the historical black middle school, Horton Middle School. Virginia Flaggers takes responsibility for putting this flag up.

Base of the flag that was sawed off overnight, according to flaggers in Pittsboro pic.twitter.com/zSYMDDP2J5

It was cemented into the ground, but overnight the metal part of the pole was sawed off, according to locals who were guarding the flag.

To counter the confederate flaggers were the activist group the Anti-Racists, Hate-Free schools and Maya Little,  Chapel Hill graduate student and activist who was charged at the Silent Sam protests for inciting a riot and assaulting an officer. Charges against her have since been dropped.

Three members of the League of the South, a white nationalist group, attended the protests. The organization had an active presence during the "Unite the Right" rally in Charlottesville, VA.

Gregory Randall, member of the League of the South, said he attended the Unite the Rally and traveled from Virginia to Pittsboro that day to support the demonstrations. Randall said the core of his beliefs is that he's a successionist — he believes that the south should succeed from the Union —  and that white people deserve more representation in government.

One woman, Jessica "Maude" Reavis, was wearing a silver cross necklace which the Anti-defamation League says is used as a symbol of hate by the Klu Klux Klan, neo-Nazi's and Racist Skinheads.

Before officers arrived to the scene, a man who goes by the name "R David King" on social media had a gun on his hip. Anti-hate protesters were provoking him in a crowd and police declared the protest a demonstration, meaning no one who was protesting could have guns. Sergant David Deshaies from the Pittsboro Police Department attempted to separate the two groups by asking the anti-hate to protest on one side of the sidewalk, and the confederates flaggers on the other. Only some of the protestors separated after.

Police arrived to the scene after man with gun arrived — name has not been confirmed — and declared the scene as a demonstration. Man was asked to have his gun put down. Video of the police calming down the scene. Thankful for Officer Deshais for responding to this situation. pic.twitter.com/DLYIeWYUMF

Most of the activity of the day took place in a public lot across from the Pittbsoro Presbyterian Church.

Little arrived after the confederate protesters had set up, playing rap music and starting chants, "Fuck the Confederate flag." Officers stepped between her and the flaggers often.