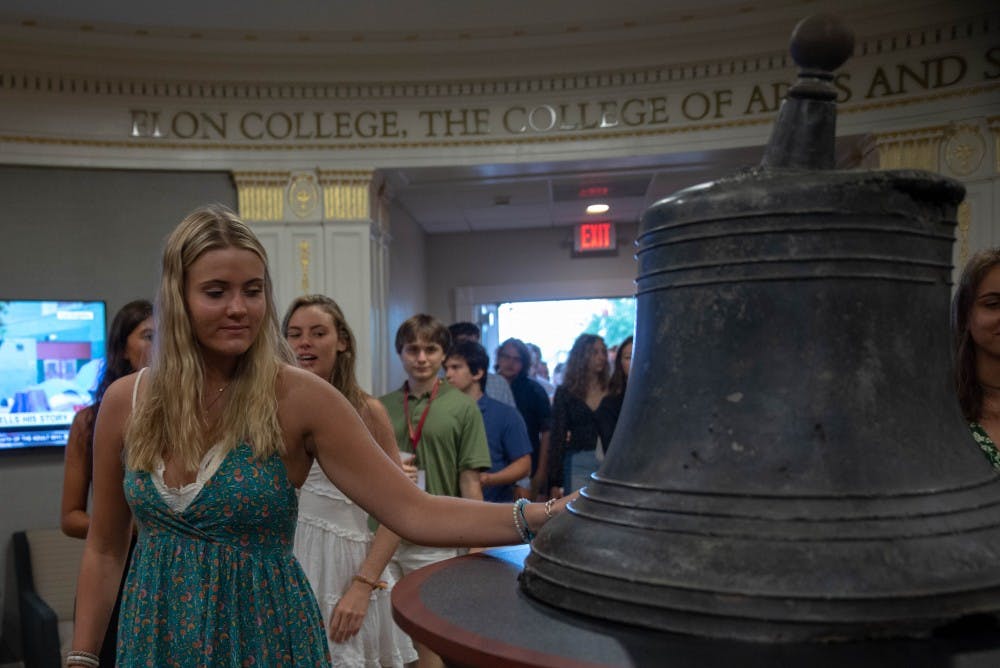 
New members of the Class of 2023 started a new tradition by touching the Burnt Bell in Alamance Building before continuing on to convocation. The burnt bell is one of the last remaining relics of the 1923 Elon fire.

CORRECTION: The original version of this article misstated the size of the Class of 2023, it is the second-largest class in Elon history. The positions of two sources interviewed about the Elon Core Curriculum and common reading were also misstated. The synopsis of FutureFace has also been updated. Elon News Network regrets the errors.

Throughout the summer, incoming first years across the country have been counting down to move in day. Now that it is finally here, the sounds of excited greetings, infectious laughter and nervous chatter fill the campus.

For incoming freshman, Wellsley Cohen, a San Francisco native, says that living in Elon will be a bit of an adjustment. In the midst of applying to universities and colleges, Cohen expected she would attend one in California.

“When I visited North Carolina, Elon specifically, I was just blown away by ... how nice everyone is,” Cohen said. “I really wanted a change. Growing up in a city can sort of wear on you at times, and being in a smaller more suburban area like Elon, well, I was totally drawn in to that.”

Cohen is coming to North Carolina not knowing a soul, and despite being almost 3,000 miles from home she says she isn’t worried. Having attended an all girls school for most of her life, Cohen says the transition to Elon, a 62% female incoming class, won’t be all that difficult.

“I think I will feel really supported in this move, both by professors I meet and new friends,” she said. Having lived in the same place for her whole life, Cohen says she’s most excited to broaden her perspective by meeting new people from all over the country.


The idea of meeting new people is what most entices Paris Taliadouros as well. Taliadouros is from Winchester, Massachusetts along with the 10% of the Class of 2023 that call somewhere “20-minutes-outside-of-Boston” home. This is the first time in 10 years that Massachusetts is not the second most represented state, behind North Carolina. This year New Jersey took the second place spot with 175 incoming students.

While there might be other students from close to home, he says he didn’t know any students before participating in Adventures in Leadership (AIL), an Elon summer program that takes incoming freshman through North Carolina on a week-long backpacking and white-water rafting experience.

“I was super nervous leading up to AIL,” Taliadouros said. “I had never done any sort of camping before, not even slept in a tent. It ended up being the best decision I ever made.”

Taliadouros says he is looking forward to discovering many more unknowns once on campus. The program, in fact, introduced him to his roommate. The two selected a random roommate, but unexpectedly both were on the trip.

“It was a total surprise,” he said. “But now I’m looking forward to orientation weekend to be reunited with all these friends I’ve made.”

The LLC’s work together throughout the year includes discussing their floor themes, attending speakers and other events. For Taliadouros, the opportunity to live in an LLC will push him to engage more with the world around him, something he says he’s fallen short of in high school.

For Cohen, who isn’t sure yet what she will study, the unknown is both exciting and daunting.

“I’m hesitant with being okay with not knowing,” she said. “Elon is structured well for that, being a liberal arts school, and allowing me to say ‘I’m still figuring it out and that’s okay.’”

While Cohen and Taliadouros might be a bit anxious about the freedom and dependency they are gaining, freshman Corinna Olson is concerned with the new structure a university will give her.

Olson’s high school experience was different than most, having studied in four different countries a year, ranging from Peru, Morocco, to China and everything in between. She says the curriculum was non-traditional, and focused mainly on project-based learning while in each country.

Olsen, a Chattanooga Tennessee native, elected to study in 12 countries throughout her non-traditional high school experience in pursuit of her love to travel.

During Rising Phoenix Weekend, Olson says she spoke with a physics professor about her concerns of adjusting to a university with a more traditional curriculum than her high school.

“The professor I talked to knew about the other school I was looking at and he was telling me that there I would be thrown in to this traditional, lecture based learning, and I didn’t want that,” Olson said. “At Elon I will be a part of it. I’ll be doing it. It might be more traditional than what I’m used to but it’s hands on. I’m honestly looking forward to that adjustment to be able to still design my own path but with a bit more guidance.”

"We hope they will have intellectual conversations that move beyond the binary white, non-white standard and start to think about what it means to be a global citizen"

Paula Patch, senior lecturer in English, says faculty are eager to interact with incoming students with open perspectives like Olson, Taliadouros and Cohen.

“We want students to engage in these conversations that might make them feel uncomfortable but might validate some things that are going to push them and pull them in different directions,” Patch said. “It might be uncomfortable but that’s what we want. That’s good and that helps them grow.”

Patch and Amy Johnson, executive director of the Elon Core Curriculum, say the required text for incoming students is meant to highlight different themes of identity and belonging that can help students contribute to conversations and adjust to a new intellectual environment.

This year’s selection, FutureFace, is Alex Wagner’s first book which draws from her own personal life experiences. The summary of the book provided by its publisher states that it is about "an acclaimed journalist [traveling] the globe to solve the mystery of her ancestry, confronting the question at the heart of the American experience of immigration, race, and identity: Who are my people?"

While the book focuses on diversity, Elon’s student body has lacked this throughout the years. However, this year’s incoming class includes 18% of students who identify as a minority, despite the majority of the class still being white. This is an improvement from year’s past, with 18% of students identifying as African-American, Hispanic, Asian American, or another ethnicity. Last year, only 16% of the incoming class identified as a minority, and just 20 years ago, the incoming class had only 83 minority students. Patch emphasizes that readings like these are vital to a community like Elon that’s predominately white to spark conversation.

“Most students probably haven’t had to think too much about where they come from or what it means to be white or non-white. We hope they will have intellectual conversations that move beyond the binary white, non-white standard and start to think about what it means to be a global citizen.”

The book offers a platform for discussion in Elon 101 classes, and in future campus events, when Wagner herself will be on campus to discuss her book with students and faculty in mid-September. The common reading book is selected the September of the year before the incoming class is expected to read it. A committee of staff, faculty, and two student representatives consider a list of suggestions before ultimately deciding in the year long process.

As students from the Class of 2023 step foot on campus for move-in, with new classes and faces before them, the thoughts of their application process might be in the distant past. But looking back at the application process, it’s interesting to note the changing acceptance rates through the years.