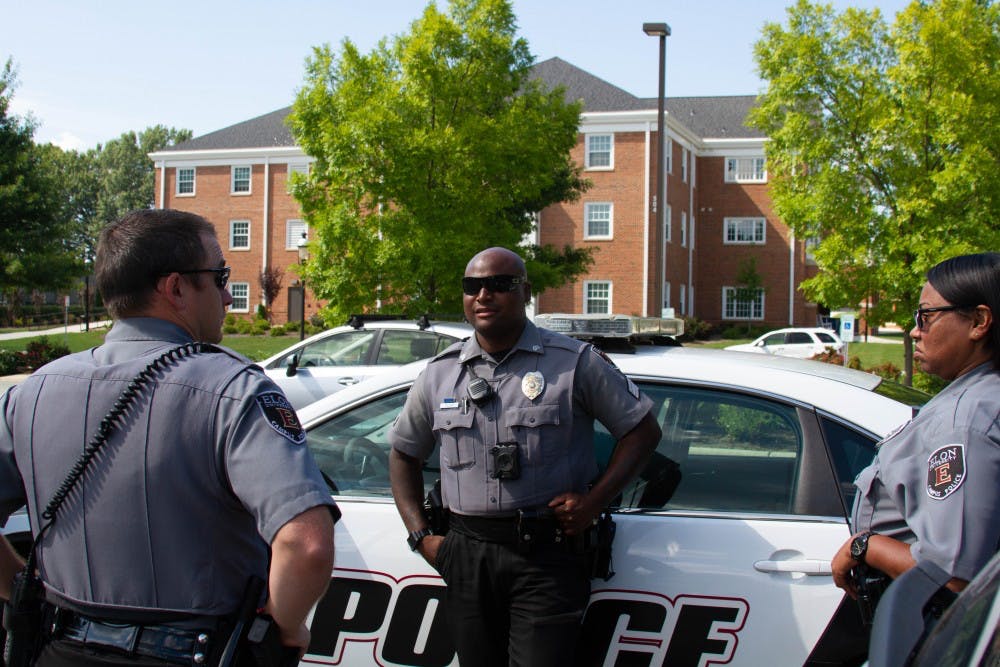 One of the first questioning hands raised following an active shooter training workshop at Elon University was about the reactionary process of “Run, hide, fight.”

“What should I bring to class that I could use to throw at a shooter?” asked Vic Costello, associate professor of communications, who teaches in a classroom with glass walls and an often locked emergency exit.

Eric Tellefsen the host of the workshop and a law enforcement professional, responded: “a bat.” Unsure whether that would abide by university policies, Costello settled on buying a maglite flashlight.

The two active shooter training workshops, are some of the ways Campus Police, Elon University’s private security force, has been preparing faculty and staff for potential active shooter situations.

The most important takeaway that Tellefsen hoped participants would take away from his workshops were the appropriate responses of “Run, hide, fight.”

“The more these things have occured, the more we realized that lives can be saved when the individual people that are there know what to do and they know how to respond,” Tellefsen said.

“The more information we can get out there and the better prepared everybody can be, than it’s going to be beneficial,” said Joel Thomas, community liaison sergeant for Campus Police. “You can’t turn on the news nowadays without hearing some kind of mass shooting somewhere. Whether it be at a campus or at a Walmart.”

Thomas was referring to a mass shooting at a Walmart in El Paso, Texas that left more than 20 dead in early August.

According to Tellefsen, joint training simulations between multiple law enforcement agencies are common practice in the industry. In the event of an active shooter it is likely that all security services in a community will be called in to respond.

While Campus Police officers and Elon faculty have participated in active shooter trainings and workshops, students have only been exposed to informational resources, such as online videos and campus-wide posters.

According to Thomas, there are currently no plans to offer or mandate students to attend active shooter trainings or workshops.

“Students are busy, professors are busy, everybody’s busy, but being prepared would help a lot,” Thomas said. “It would be beneficial to go towards that direction. But there are a lot of moving pieces in getting a whole community or a whole campus involved in an active shooter style training scenario.”

“In this day and time, this type of violence may touch the lives of our students in a place that they feel is safe,” Mitchell said. “Community members and especially students need this knowledge to prepare themselves.”

Mitchell is in the process of working with student leaders to incorporate active aggressor response trainings to new student orientation. He hopes this will come into effect by fall 2020.

At any given time at Elon, there are at least three on-duty Campus Police officers, according to Thomas. The department includes 21 sworn police officers, more than the number of officers in the Town of Elon and Gibsonville police departments and 12 community service officers (CSO).

“Our duty is to ensure that our officers are always following policy and procedures and treating the community with the utmost respect,” said Campus Police Sgt. Ryan Fuller. “We understand young adults can make poor decisions. We want to be the bridge that gets students from making those same poor decisions to prospering in adult life once they leave this university.”

As a sworn police officer, Fuller along with his 20 colleagues have the same power of arrest as any city, county or state officer in North Carolina.

“We do have jurisdiction outside of our campus just small little sections that fill in gaps,” Thomas said. “It’s basically, this campus or anything adjacent to campus.”

For example, Campus Police have jurisdiction over the section of Haggard Avenue, which connects The Gerald L. Francis Center to main campus, despite the university not owning that stretch of land.

The mutual aid agreement does not extend to student off-campus housing. Any incidents in student homes outside of campus property are responded to by local departments.

“We are always looking for new ways to help us reach our goal of protecting the Elon community,” Thomas said.