Constructing furniture one prayer at a time

How a family project turned into a local business 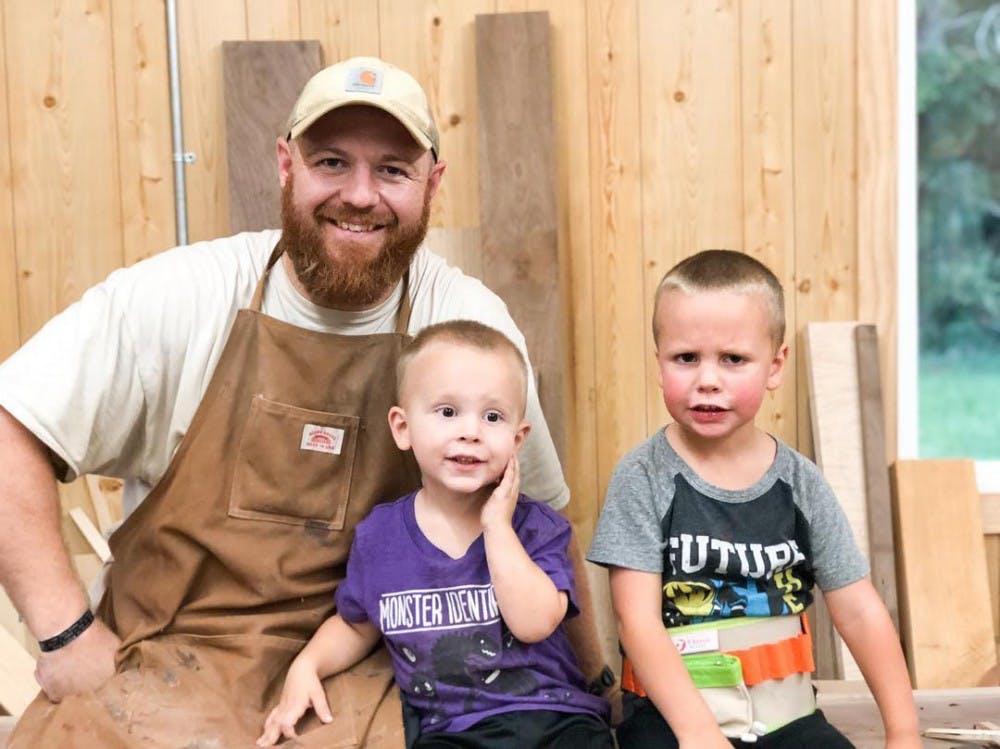 Garrett Carnes, his wife Courtney (not pictured) and his sons Easton and Chase gather as a family around every piece of furniture and pray over it before it is shipped out. [Photo courtesy of: Garrett Carnes]

In silence, Garrett Carnes plugs his headphones in, sweating and bleeding at times while he works on furniture. Every nail, screw and piece he constructs is done in prayer.

He considers every moment at his shop in Burlington to be a spiritual experience. All the pieces he has made since he began his business in 2014 have a unique stamp on it — a Bible scripture. Garrett said this scripture is laid in his heart for the family or person for whom the piece is made.

Not only does it have a meaning for him, but it is also important to his wife Courtney and sons Easton and Chase. Before any piece is shipped out or delivered, they gather as a family and pray over it.

“We pray for whatever God lays on our heart for that family to be prayed about,” Garrett said. “Everything we do is faith-based.”

The North Carolina Department of Commerce considers North Carolina the “furniture capital of the world” with the largest furnishing trade show in the world, the largest furniture store in the world and major international manufacturers. But Hammer and a Prayer is the Carneses’ family business. Instead of focusing on money and competing with other local companies, the Carneses focus on the relationships they make for their clients and the heart they put into every piece.

In 2014, Garrett had the idea of building a toy box for Chase’s first Christmas. He recalls that he had a lot of toys but nowhere to keep them and had the desire to make something by hand for him.

“I spent way too much money making it because I destroyed all the materials that were going into it, but I had a great time,” Garrett said. “It is the piece I am most proud of because it started the journey that we are on.”

After learning how to make the toy box, Courtney suggested that Garrett start a woodworking business. He quickly began learning through YouTube tutorials, magazines, forums and local workshops.

“I would get to a point where I could see progress and it would excite me and fueled the motivation to do even more,” Garrett said.

Through trial, error and dedication, Garrett and Courtney slowly started to get clients. Their name “Hammer and a Prayer” was Courtney's idea to connect the woodworking aspect with their Christian faith.

When Garrett began his business, he sought guidance from Jim Young, a friend and the owner of Salvation Coffee Co., which is also a Christian-owned business in Burlington. Young considers Garrett an inspiration, and has given him and Courtney advice on the lessons he learned from his own mistakes.

“We are Christian, and we don’t hide that fact,” Young said. “But we are not shoving that down anybody’s throat. If given the opportunity to give our testimony, we will, but it is not like we’re going to use that to exclude anybody.”

According to the U.S. Bureau of Labor Statistics in 2017, North Carolina is one of the top five states in the country for residential furniture — the type of furniture found in homes. The Carneses deal with this type of furniture by building dining tables, benches, stools, cutting boards and wine displays, among other pieces. They are mainly known for their tables. The prices vary on the material they use and the size of the piece.

Garrett said he tries to make the tables and other pieces with love, care and attention to detail. He does not like building a project and shipping it within a couple of days because he wants to be personal and spend his time with it.

While Garrett focuses on the woodworking, Courtney deals with promotions on social media and gives him artistic ideas on how to create certain pieces. From there, Garrett said he figures out how to put his own twist on them.

Through their posts on Instagram and Facebook, Jonathan Oliphant, head football coach of Lake Norman High School in Mooresville, North Carolina, reached out to have a war hammer done for his football team.

“A lot of teams have the turnover chain, the weight room, the WWE belts, and we wanted something different that was kind of ours,” Oliphant said. “We wanted something with a little bit more meaning behind it, and so we carry it [the hammer] with us to every game.”

Oliphant said Garrett came to Lake Norman to deliver the hammer in summer 2018 and gave the football team a talk about the process that went into making the piece and the story behind it.

“It’s cool for me to see that they enjoy a piece of me out there,” Garrett said. “I never thought that I would embark on this after building a toy box.”

Garrett said both sons have done something of note to every piece they have sold despite their young ages of 2 and 4 years old. When Young met the Carneses at a veterans’ benefit banquet, he was amazed at the prayer one of the kids led as well as their family dynamic.

“You can tell he loves those kids to death,” Young said. “Garrett participates in their lives all day and every day, and that is a reason of why he’s so blessed with the company.”

Garrett hopes the boys’ experience at the shop can create a work ethic in them as well as provide them with trade skills and a “do-it-yourself mentality.” For him, the biggest reward is to work with his wife and see his kids enjoy the shop.

"YOU HIRE A LEGLESS WOODWORKER. I PROMISE YOU THAT I WILL BE A LOT SLOWER, BUT I WILL TAKE A LOT OF TIME AND CARE."

OWNER & FOUNDER OF HAMMER AND A PRAYER

Garrett said his biggest challenge is juggling the different aspects of his life which include fatherhood, woodworking, church ministry and being a military veteran.

Garrett lost both of his legs in the U.S. Marines after stepping on an improvised explosive device (IED) while deployed in Afghanistan in 2012.

He said it is tiresome to be in the wheelchair at the shop as well as with his prosthetics since his legs tend to hurt for hours after a long day of work.

“It’s definitely troublesome,” Garrett said. “One of my slogans is, ‘You hire a legless woodworker. I promise you that I will be a lot slower, but I will take a lot of time and care.’”

When Garrett visited the Lake Norman football team, he talked to them about his personal experiences in Afghanistan.

“A man who lost both of his legs talked about perseverance,” Oliphant said. “Knowing his story and how he has overcome adversity and has turned something tragic into something special in his life meant a lot to my guys.”

The U.S. Small Business Administration found in the 2012 U.S. Census that about 2.52 million businesses around the country were majority-owned by veterans. Of these, about 7.3 percent of veteran small-business owners had service-connected disabilities.

“Jim ate, breathed and slept Army for a long portion of his life, and he is still a soldier, and I am the same way about the Marine Corps,” Garrett said. “But he’s not going to hang his hat on his military career for the rest of his life.”

Not only are these businesses locally sourced, but they also want to be known for more than just the title of being veteran-owned.

“This is an example that we aren’t just here because we’re veteran-owned businesses,” Young said, “but because we wanted to do something, and that is what we are doing.”

Garrett said he enjoys getting to know veterans who come home and beat the stereotypes of being broken veterans. He acknowledges that their experiences in the military to give them a lot of intangible skills in character, leadership, discipline and relationships that have helped him in connecting with the community.

Garrett is also a mixed martial arts (MMA) fighter. He does MMA not only because he enjoys it but because he wants to show how a disabled fighter can climb in the cage and fight able-bodied people.

“It’s not about me going in there,” Garrett said. “It’s about what it can do for other folks and the dreams and goals that they have for themselves.”

Through all his roles, Garrett said he has blazed trails for others like him. This is something that excites and humbles him.

“I think about not just military veterans, but kids that maybe grow up in a wheelchair or have some type of physical quote-unquote disability or mental disability,” Garrett said. “They’ll be able to see guys like myself and my peers that are moving forward as their examples of what they can do with their lives.”

With all that he does, Garrett said his family has been so blessed by their community that they aspire to give back to them through Hammer and a Prayer.

The family’s ultimate goal in the future is to open a shop in the Burlington area where other makers and creators can have a platform to either bring their products, do demonstrations, teach and take classes to grow in their crafts. They hope to become a home for current and future woodworkers.