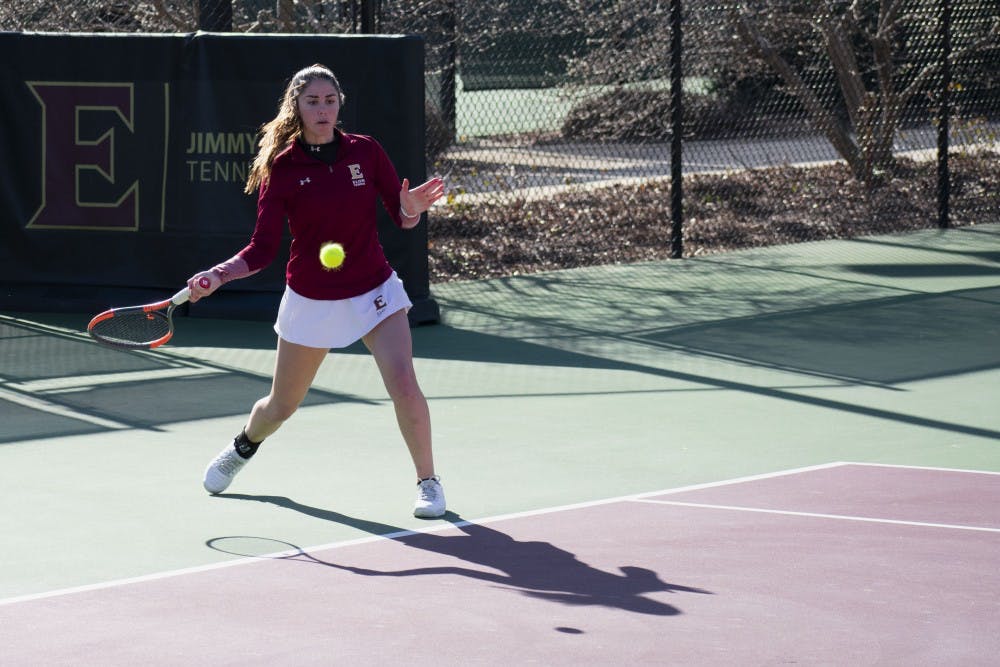 With Elon University’s 2019 women’s tennis season coming to an end at the hands of No. 1 seed College of William and Mary in the CAA semifinals, the Phoenix must say goodbye to one of its leaders, senior Maria Paraja.

Though the season was cut one game short of the team’s first CAA championship game, Paraja went out on top. She downed the Tribe’s Natalia Perry in straight sets,6-4, 6-3, to secure a win for the Phoenix in her final match in maroon and gold.

In her senior season, Paraja took the role as Elon’s strong No. 2 behind classmate Suzanne Zenoni. From the No. 2 position, Paraja tallied 12 wins and only three losses for the Phoenix. Many of these matches went to deciding third sets, all battled through and through as Paraja showcased her resilience and scrap.

After Paraja’s final regular season match at the Jimmy Powell Tennis Center, the senior captain said the fact that her career with the Phoenix was coming to a close is finally starting to set in.

“This could be the last time we play here, so it definitely hit me thinking about old memories and how I’m going to miss this team next year,” Paraja said.

was Paraja's winning percentage in singles matches from 2016 to 2018.

Being the team captain and one of the team’s top scorers is far from where the international student started just four years ago.

Paraja grew up and played tennis for the first time in Gijon, Spain. Being nearly 4,000 miles away and playing primarily on clay courts were only some of the differences between play at Elon and her hometown.

Paraja said the biggest difference between Spanish and American tennis is the team dynamic. Juniors’ matches in Spain are more individually based, and according to Paraja, you “play more for yourself.” Because of this, winning and losing rests primarily on the player and does not really affect anyone else. In contrast, the American style of play is more team based: teammates rely on each other to gather points for the team’s total score. Paraja said coming to Elon in fall 2015 was a hard transition, but she came to enjoy the team dynamic more.

From her freshman year to now, Paraja experienced a lot of growth on and off the court. While she is now one the loudest and most energetic players on the team, that confidence came from years of development and learning from previous upperclassmen. As a senior, Paraja has pushed herself to be a positive role model for the team in all aspects of life. Such leadership is crucial for a Phoenix team that featured three freshman in starting roles.

“I try my best on and off the court because I feel a lot of things you do off the court can affect how you play on the court,” Paraja said. “If you keep a positive attitude, it can impact the rest of your teammates.”

Head coach Elizabeth Anderson has been the at the helm of the women’s team since 2005 and said Paraja has one of the biggest hearts of anyone she has ever coached. Anderson recalled that that Paraja was not in the starting lineup her freshman year, but her tireless work ethic to improve her game made her one of the best players on the team. Anderson said what made her such a great player to coach was her character.

"She's selfless. It's always team-first with Maria, and it's been that way from the first moment she stepped on campus."

“She’s selfless. It’s always team-first with Maria, and it’s been that way from the first moment she stepped on campus,” Anderson said.

This attitude and character has rubbed off on many other players, but none have been impacted quite like junior Alex Koniaev. Paraja and Koniaev have been doubles partners for three years since Koniaev was a freshman. This year, the pair earned finished with a 9-7 record against their opponents’ top doubles teams. They have also lived together as roommates for the past two years, making them even closer off the court and creating a sisterly bond between the two.

“She took me under her wing freshman year, and especially this year, her and Suzanne [Zenoni] were seniors this year, and they really stepped up and were the best seniors you could ask for,” Koniaev said.

With her heart, passion and love for the team, Paraja will be missed next year by the program, her teammates and especially her coach.

“I think she has developed lasting relationships with those teammates, and I think this is an experience I will treasure — working with her — and I’m so happy I had the opportunity to,” Anderson said.