Food for thought: The story behind Greensboro’s immigrant-owned restaurants 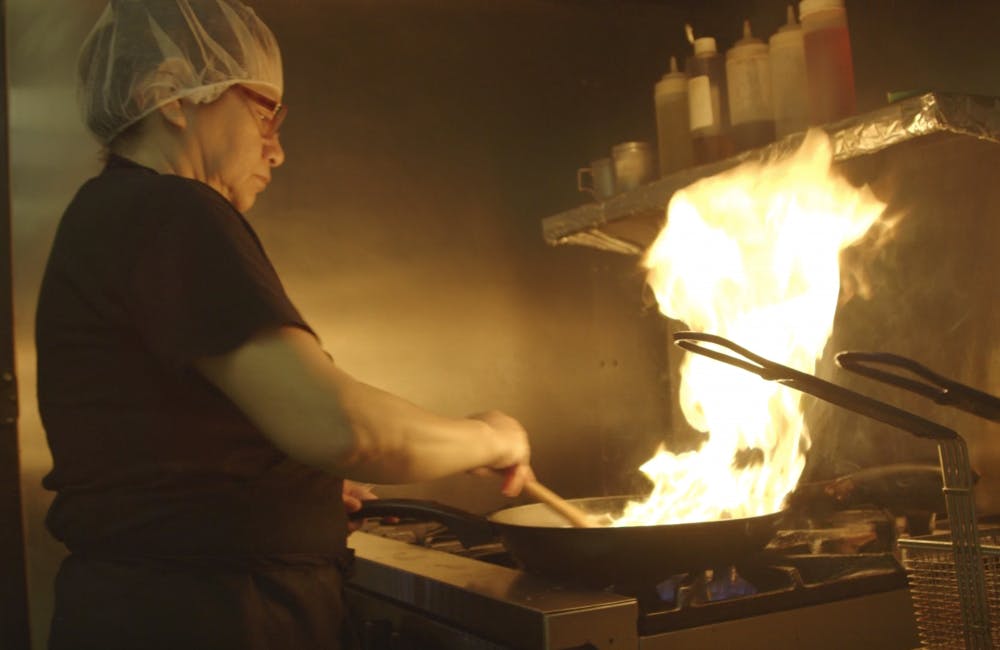 In the breakout box the name of Guilford County was misspelled. The error has been corrected.

At the La Palma restaurant, cooking is a family affair.

Biana Guerrero, the restaurant owner, doesn’t take many breaks. She is at her restaurant seven days a week, along with her husband, children and sometimes grandchildren. Since 2017, La Palma has been serving the greater Greensboro community with authentic Dominican and Caribbean cuisine. With fried plantains, rice and beans at the ready, the Guerreros are always open to sharing a taste of their home with the city.

“My family is always together,” Guerrero said with a laugh. “The Caribbean family and food are just so different.”

For 14 years, Guerrero has called North Carolina her home. She immigrated to the U.S. from the Dominican Republic in 1994, hoping to start a Dominican restaurant while first living in Rhode Island.

“We came here looking for a better job,” Guerrero said. “But the problem was we only had a food truck [in Rhode Island].”

Following the suggestion of a couple friends, Guerrero decided to move her family to Greensboro, hoping to expand their business. But when the Guerreros arrived, they found that there weren’t many Dominicans living in the area.

‘“People come and see the food and sometimes try and ask for Mexican style food, but we say we don’t have that. It’s hard because sometimes the people living in Greensboro never go into those places where they have Dominican food,” Guerrero said.

Guerrero was then approached with a unique opportunity to put her cuisine on the map. After seeing a need for global engagement in the community, Alex McKinney and Donovan McKnight co-founded Ethnosh, a nonprofit network of immigrant-owned restaurants with a goal to connect Greensboro with the international food scene. Guerrero has since become one of 40 international restaurants to partner with McKinney and McKnight on their project.

“What we found missing was the cultural information touching the culture of the people that own the businesses and their stories — what brought them to Greensboro and how that food connects them to where they came from,” McKinney said.

The two “adventure foodies,” as McKinney described, met four years ago while working on a design project for Pace Communications, a marketing agency where McKnight works. They both realized one another’s passions for food and culture and combined them to form Ethnosh in 2015.

As part of their initiative, McKinney and McKnight regularly seek out international restaurants to partner with and help develop. McKinney said while some restaurant owners were hesitant at first, many have been open to the idea.

Ethnosh provides marketing services for the restaurants through their website. Each restaurant has a dedicated webpage consisting of photographs, features of the owners and items on the menu. The organization also organizes “Nosh Up” gatherings with the owners, giving the community a chance to taste a sample of authentic cooking at one of the featured restaurants.

These events provide owners with a platform to share their personal stories of immigrating to the United States and starting their own restaurants. McKinney said the hourlong events help foster a community where difference isn’t just tolerated but also celebrated.

“This encourages repeat visits after the event and a more aware community. I think people around here support the entire community and they love to see different flavors and different cultures around town,” McKinney said.

The city of Greensboro is known for its diverse background. According to Guilford County’s most recent census report, 10% of the county’s population is foreign-born. The Center for New North Carolinians reports that more than 140 countries are represented in Greensboro’s population, with strong representation from Mexico, India and Vietnam. Holly Sienkiewicz, director of the Center for New North Carolinians, said Greensboro’s diverse background attracts more foreigners.

“The cost of living is really affordable compared to some other cities. That’s kind of a natural appeal and because there’s such a strong presence of immigrants and refugees, a lot of people will hear about a family member or a friend that realized the cost is less and then make that switch,” said Sienkiewicz.

Just down the road from La Palma is another Ethnosh partner called Simauchi, a Peruvian restaurant owned by Sara Vidal and her family. They ran a restaurant in New Jersey before moving to North Carolina in 1997 for cheaper housing and a slower-paced city.

“It was just so fast-paced in New Jersey,” said Shirley Simauchi, Vidal’s daughter. “Greensboro was more of a calm life compared to the big city.”

Simauchi was born in the United States but said working with her family at their restaurant makes her proud to be Peruvian. The rich spices and sizzling vegetable rice, which she and Vidal insisted must always be fresh, are deeply rooted in her family’s identity. Simauchi said their restaurant can help people develop a greater understanding for immigration to the U.S.

Vidal said as an immigrant herself, she hasn’t faced any bias or racism in the U.S., but Simauchi said her family’s cuisine can help change perspectives.

“People really do forget that a lot of these people really love their culture and love where they’re from. They’re proud to be from that country. They wouldn’t want to leave if they didn’t have to, but because they have to sacrifice to make sure their kids are able to see another day,” Simauchi said.