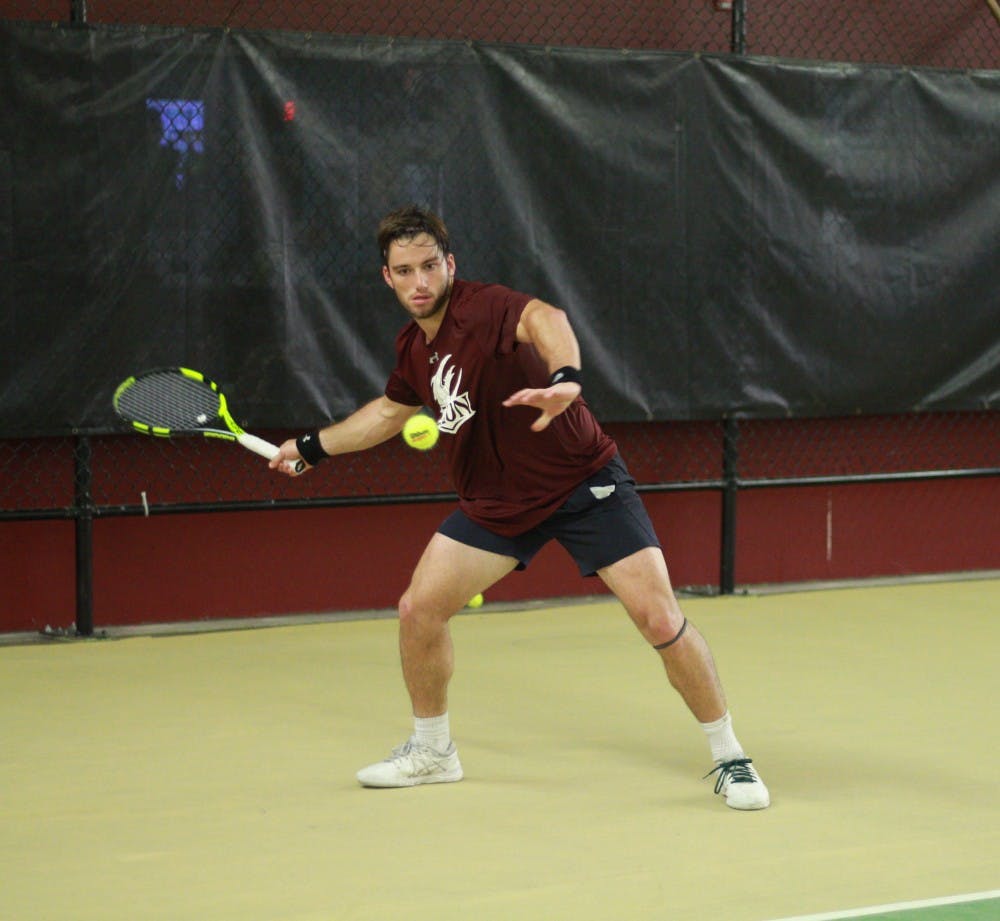 Senior Felipe Sarrasague is undoubtedly one of the most special tennis players to ever step foot on Elon University’s campus.

His incredible, raw talent has grown throughout his four years at Elon, and in response, he has been showered with accolades and awards. But these accomplishments have been a blessing and a curse for Sarrasague.

Sarrasague started playing tennis at five years old in his hometown of Buenos Aires, Argentina. Having been taught how to play by his father, Ignacio, Sarrasague quickly developed a deep passion for the game. While being a professional tennis player had always been his dream, it took some time for this dream to get off the ground.

“I used to go to school from 7:30 in the morning to 5 p.m., so I couldn’t really play many tournaments at least in South America,” Sarrasague said. “I tried to go around Argentina, but the school was giving me a hard time to go and play tournaments.”

After proving himself as a legitimate rising star in Argentine tennis, his school, Fray Mamerto Esquiu, gave Sarrasague academic leeway to pursue his athletic passion. This freedom allowed him to compete in international tournaments where he became the No. 7 ranked U-18 singles player in Argentina. Now a sought-after college athlete, the high school senior chose Elon under the guidance of head coach Michael Leonard to continue his tennis career.

Sarrasague stepped onto Elon’s campus in January 2016, and his presence was immediately felt. In spring 2016, his first time playing in the United States, Sarrasague tallied 15 singles wins and was named First Team All-CAA and CAA Rookie of the Year. This all came from playing primarily in the No. 1 and No. 2 positions where he would be consistently matched up against the opposing team’s top players.

“He was always a great competitor with regards to hustle, fire and scrap, but his game got a lot bigger over the years,” Leonard said.

By his sophomore year, Sarrasague was the undisputed top dog in Elon tennis. Between the fall and the spring, he won 21 matches, all from the No.1 position. He was named First Team All-CAA for the second year in a row.

Sarrasague was not always competing on the court alone. In his sophomore year, he started teaming up with his classmate Mario Paccini. Together, they finished 9-5 overall and 5-2 on the tour. Paccini was injured in their junior year, but the two reunited for their senior season. During this time together, the two became close on and off the court.

“We’ll eat together, we’ll have dinner with the entire team, and Felipe and I will just talk doubles or watch tennis. We watch a lot of highlights, and it’s good we talk a lot about tennis,” Paccini said.

Now in their senior year, the two still share a court for doubles where they are the top doubles team and hold a record of 7-1. Their relationship is now also one of competition. Since Sarrasague plays at the No.1 position and Paccini plays the No. 2 position, the two constantly go head-to- head in practice.

“We push each other hard, but we understand that it’s tough to compete against each other, but we like it, so that’s what we try to do as much as we can,” Paccini said.

His early success and development culminated in a career-defining junior season. He tallied a team high of 20 singles matches and added 15 more wins in doubles competition. Once again, he was competing solely from the No.1 position where he went head-to-head with three Intercollegiate Tennis Association top-150 ranked opponents. This impressive season resulted in the high honor of CAA Player of the Year and his third consecutive First Team All-CAA nomination, the first such mark in program history.

Though the accolades are reinforcements of Sarrasague’s greatness and, to an extent, proof of his dream coming true, they bring unintended consequences. Behind all the glory of being ranked, there is a great amount of pressure that falls on the shoulders of the Argentine superstar.

Sarassague said the pressure he puts on himself often comes out on the court. During matches, he said he gets “tight” when he thinks about losing and what that will do to his ranking and status. This lapse in focus leads to mistakes, and the fire he plays with turns to frustration. He is then forced to pull himself out of that rut and refocus on the match itself.

“I’m kind of like a rollercoaster, and I’m trying to stay in balance. That would be my goal,” Sarrasague said.

This mental instability has been a focal point of the coaching staff’s coaching of Sarrasague. Leonard understands that to get the best out of his star player, it all starts with his mentality going into the matches.

“Hitting the ball wise, we feel like he can play with anybody, but if he starts to become negative, things start to get away,” Leonard said. “Most of his matches are all about psychology: it has nothing to do about hitting the tennis ball; it’s about how he handles adversity.”

"Most of his matches are all about psychology: it has nothing to do about hitting the tennis ball; it's about how he handles adversity. "

In order to keep Sarrasague on track, Leonard brought back his former player and Sarrasague’s former teammate Neal Port ‘18, as an assistant coach. And part of Port’s role is to stand in Sarrasague’s corner and reel him in when his emotions start to get the best of him.

“He needs someone to feed off of. He plays with energy, he plays with positivity, he plays with fire, he’s tough and he can change all that energy to something negative. You need to try and quickly get him to reset that mindset,” Leonard said.

With the CAA conference tournament set to take place Thursday at the Jimmy Powell Tennis Center, the hope of both Sarrasague and the coaching staff is for him to enter the tournament in the right mindset in order to finish his Elon career on a high note.

“I am trying to find the balance in between that so I can hopefully play my best tennis in the most important competition that is the conference,” Sarrasague said.