The spring season ends with inter-squad competition at Rudd Field 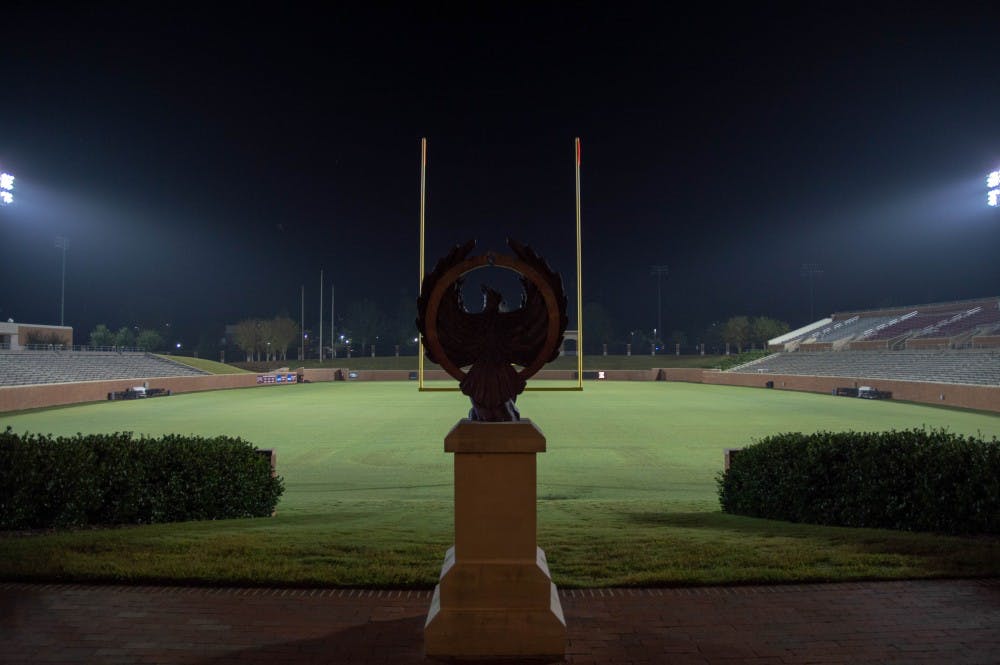 
Rhodes Stadium is prepared awaiting the return of the Elon Football team after their big win against James Madison Unitversity on Oct. 6.

Pads were popping on Rudd Field as the Elon Football team competed in their third and final inter-squad scrimmage of the spring season Saturday April 27.

The scrimmage was made up of simulated possessions where first, second and third lines of offense and defense would go at it full contact. Referee’s lined the sidelines, coordinators stood behind their teams and fans and new recruits watched from the stands. This event was a culmination of 15 team practices and scrimmages during the spring.

“When I look at the spring it's a win, we won the spring. We asked the guys to come out here with attitude, effort and discipline everyday and I think they bought in I’m happy with the culture of the program and where they’re at right now,” head football coach Tony Trisciani said.

The scrimmage itself was dominated by the defense coached by new defensive coordinator Billy Crocker. The defense, with a front anchored by senior defensive end Marcus Willoughby and a secondary that includes senior defensive back Greg Liggs Jr., held the Phoenix offense to just one score the entire scrimmage. This score came when redshirt freshman quarterback Joey Baughman uncorked a 43-yard bomb down the left sideline to incoming 2023 freshman Chandler Brayboy who pulled down the pass over his defender’s head.

Besides the traditional offense vs. defense structure, the team also made a point to practice situational moments in a game. For example, the team did a drill called: “Get the ball back,” where the defense needed to stop the offense and their offense needed to score in the ensuing drive before the time expired. To conclude the hard fought scrimmage, the team simulated overtime sessions.

"It’s real important, I mean that where a lot of football games are won and lost right? So it’s good for every body, it's good for the players, the coaches, the coordinators, it's good for me to be in those situations,” Trisciani said.

The team gets a bit of a break with May being a less intense month for the team physically. However, Trisciani says while the team will not be on the field as much they must continue to work harder off it.

“What I want to transition to next is the academic part of things. We have to finish strong in the classroom with finals and it's just like anything you got to finish,” Trisciani said.