"Sextracurriculars" week to give students a fun look at sexual health 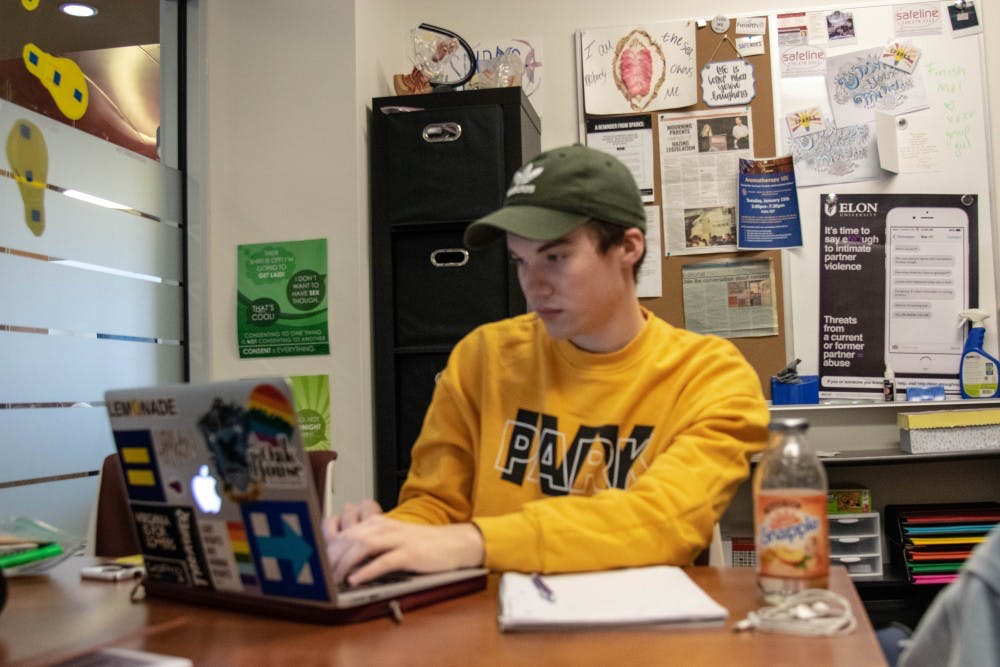 
Senior Ryan Wells works on his laptop in the Sparks office, located in Moseley Center.

Elon University’s Students Promoting Awareness, Responsibility, Knowledge and Success is hosting a series of events called “a week of sextracurriculars” that are occurring through the first week of March.

Beginning on Tuesday, March 5, with “Let’s (Actually) Talk about Sex,” a seminar led by senior Ryan Wells, the week of events will raise awareness for sexual health and get students comfortable enough to open a dialogue about topics not typically discussed.

Wells’ seminar was “an LGBTQ-inclusive sexual education program” in which he talked about topics usually not addressed in public school sex education, Wells explained. The topics discussed included gender identity, sexual orientation, and intercourse between same-sex couples — topics which Wells says are essential to queer students.

In this way, queer sexual education is a way to “stop the stigma not only surrounding LGBTQ sex but just talking about sex in general,” Wells said. “So many people are participating in it, and if we talk about it, it can not only be safer, but it can also be better sex, which should also be the goal.”

"So many people are participating in it, and if we talk about it, it can not only be safer, but it can also be better sex, which should also be the goal."

SPARKS peer educators like Wells and freshman Joycelyn Bentley are hired as “authentic and accepting” mentors that facilitate “a nonjudgmental space to engage in supportive, open-minded conversations,” according to Campus Recreation and Wellness.

“We focus holistically on health,” Bentley said. “You can come to us and ask us any question, and we can either help you answer that question or lead you to a resource that will help you find the answer.”

Other events during the week include weekly wellness tabling, free testing for sexually-transmitted infections and a trivia night called “Are You Smarter than a Sexpert?” These events, Bentley hopes, will bolster the organization’s popularity and help Elon students become more comfortable talking about their sexual health.

The trivia night will be especially instrumental in raising awareness of sexual health, Bentley said. The event will include questions that “aren’t just fun and aren’t just educational, they intersect somewhere in between,” with categories ranging from “pleasure” to “kinks and fetishes,” which Bentley says will make it “fun but informative at the same time.”

While the trivia questions give Bentley high hopes for educating students, she said the prizes are what have driven more than 30 teams of people to sign up for the event.

The prizes will include “an assortment” of sex toys ranging in value from $70 to $119, as well as stickers, lubricant and contraception.

SPARKS' week of events will include
intersectional sex education available for students.

“It really enforces sex positivity. … Nobody wants to talk about their sex toys,” Bentley said.

While students might find it an uncomfortable topic, Bentley said being open is important. “We need them to talk about it because it’s a natural part of life,” she said.

SPARKS’ “sextracurriculars” week will include free STI testing for HIV, Syphilis and Hepatitis C. Getting regularly tested, Wells said, is just as important — if not more important — than getting a checkup at the physician’s office.

“I love STI testing. I think people should get it done all the time. I think there’s so much stigma surrounding it,” Wells said. “STIs can be scary, but they’re usually not. Most of them are completely curable, and all of them are at least treatable in some sense, so it’s a very normal thing to get.”

Acknowledging the normality of STIs can help individuals to move on and live healthier lives, Bentley agrees. “Just because someone’s had an STI in the past doesn’t mean it’s not treatable or curable,” she says.

STI testing will conclude the week’s activities in McKinnon Hall in Moseley from 11 a.m. to 2 p.m. The service is also provided on the first Thursday of every month. For more information, visit the SPARKS office in Moseley 105G, or visit their webpage or PhoenixConnect.