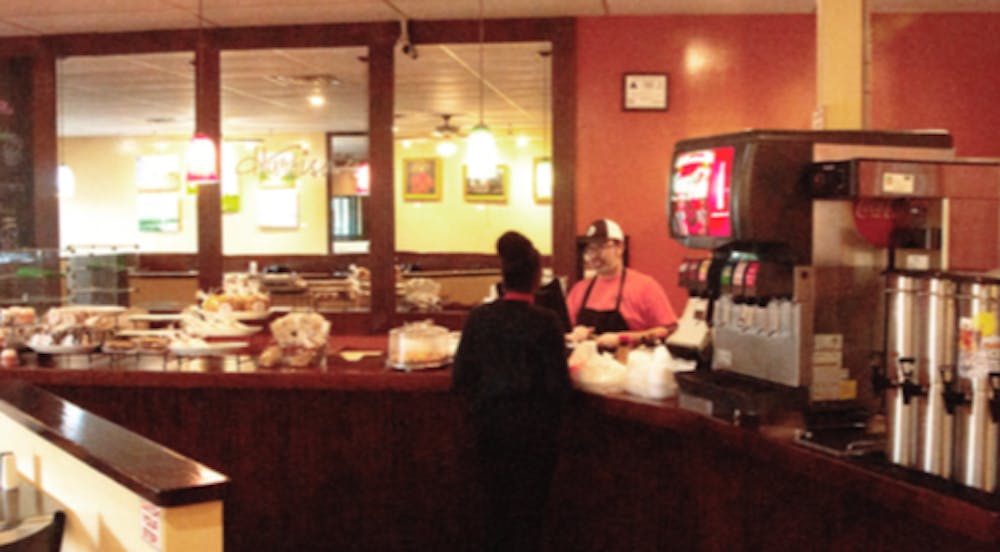 Harrison’s is a modest sandwich shop nestled in a strip off of South Church Street in New Market Square, an easy eight-minute drive from Elon’s campus.

Walking in, customers are greeted by a warm and cozy interior with small, intimate seating. A giant chalkboard menu on the wall catches the eye before the cheery staff calls out a welcome. The comforting scent of freshly made pita wafts from the kitchen, intertwined with the salty-sweet tang of teriyaki sauce and cooking chicken.

Named after owner Paul Clayton’s family name, Clayton started working at Harrison’s when he was 14 years old. His father, Fred, started the restaurant in 1995 after his previous restaurant, Kamal’s, closed down.

Nowadays, the food at Harrison’s is considered simplistic, but Clayton said when Harrison’s first opened, the food was “borderline exotic.” No one really knew “what the hell pita bread and that stuff was,” Clayton said.

Besides being known for their special teriyaki chicken served on pita and shish kebab platters, Harrison’s also caters. “We do some weddings, we do some private stuff, but it's mainly Alamance Community College, Kernodle Clinic, the hospital and LabCorp and some of the schools,” Clayton said. He added that though they typically cater to businesses, they have done a few private parties as well. “If you call and you pay for it, we'll show up,” Clayton said.

Desserts line the front table leading to the cash register — most notably the ever-popular baklava, enshrined in a glass case. The pastries are made by local town of Elon baker Meredith Wilkerson. Wilkerson started working at Harrison’s in 2014 and helped to “fill a void” the restaurant had. Her festive-themed desserts are especially popular during the holiday season, baking evil Santa heads and other decorative cookies. Clayton said she “can barely keep up with the demand” when she comes in two or three times a day to replenish her product. Clayton himself believes strongly in introducing Grinch cookies for the holidays. “They would sell. They would,” Clayton said. “I'm going to make it happen.”

The inviting atmosphere of Harrison’s is enhanced by charming artwork of flowers and roosters hanging on the walls with price tags swinging from the corners. Local artist Jill Troutman previously created some of the art adorning Harrison’s walls and has made a name for herself. She now teaches art classes and takes commissions. The Burlington Arts Council works with Harrison’s to showcase new artists, changing out the paintings every six weeks or so.

Harrison’s struggled the first few years after opening but took off in its fourth year. “Been around ever since,” Clayton said. He took over the restaurant after his father passed away in 2009 but didn’t fully take ownership until around 2015.

“We're still here after all this time, so a lot of restaurants don't make it very long. You just never know. So yeah, we got a good thing going,” Clayton said with a smile.

Considering the local ties Harrison’s has established over the last 20 years, the sandwich shop is likely not going anywhere anytime soon.