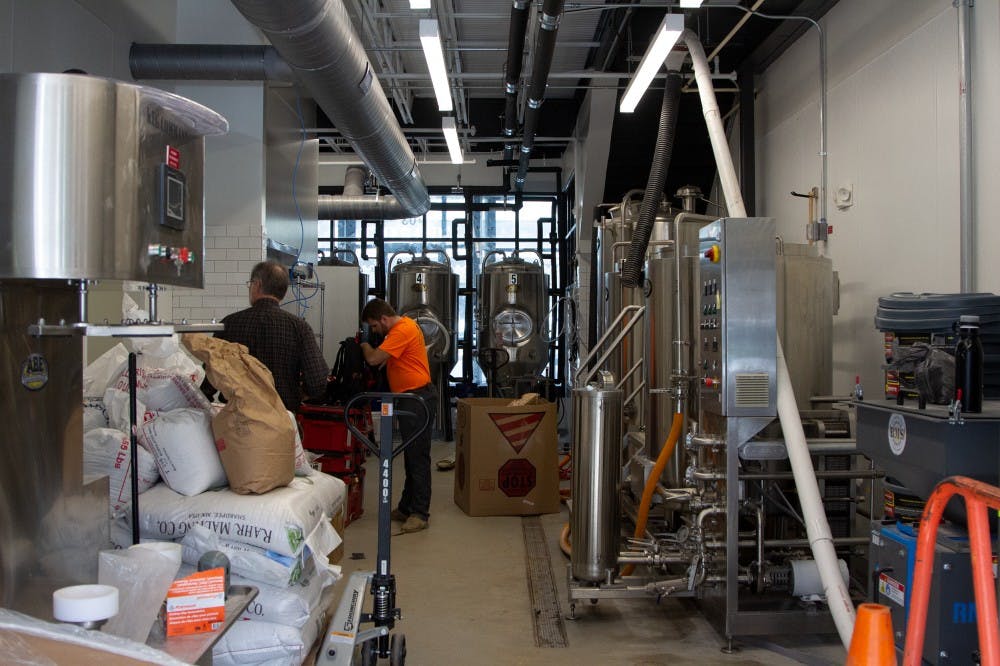 Photo by Victoria Traxler | Elon News Network
Workers at Burlington Beer Works prepare their next batch of beer in their on-site brewery.

Downtown Burlington business owners are hoping for a movement of revitalization with the upcoming opening of the Burlington Beer Works brew-pub cooperative. The restaurant is set to open in late March or early April 2019.

There are least 10 other brewery cooperatives in the nation and about four brew-pubs, according to a report by the U.S. Federation of Worker Cooperatives. But there are no brew-pub cooperatives in North Carolina.

A cooperative is a business owned and governed by its members and by the people who use it rather than by stockholders, according to the National Cooperative Business Association. Burlington Beer Works currently has more than 2,000 community owners, according to its website.

Hal Vincent, a member of the restaurant’s Board of Directors and lecturer in communications at Elon University, said cooperatives offer a unifying voice for a community-based ownership.

"we really believed in doing anything that we can to have a sustainable, inclusive, viable and, quite frankly, fun and rewarding place to live."

“A co-op model is essentially a one-share, one-owner, one-voice model,” Vincent said. “The members are really the owners, and everyone has a voice and an equal voice in the present and future of their business.”

Vincent hopes the restaurant will have a positive impact in the Elon-Burlington area.

“The purpose is to really help revitalize downtown Burlington and provide a space that can not only enhance really the entire community, but can also help lift up all of the businesses and cultural amenities of downtown Burlington to make it once again a vibrant place,” Vincent said.

“This is my hometown. I used to come down here as a child,” Schmidt said. “I’ve seen a lot of the changes that it’s gone through, and there’s just so much potential down here, and so to be a part of it and to be active and to actually be able to have an impact — that’s what drives my passion.”

The restaurant will have three levels including a rooftop seating area, three bars and a community space available for meetings. Schmidt said they are already booking graduation dinners and wedding events through October.

Schmidt said the menu will feature modern pub food, sandwiches and a traditional menu. There will be vegetarian and gluten-free options, vegan options upon request and more for those with dietary restrictions. She hopes to source all ingredients as locally as possible.

“Everybody asks, ‘What does ‘local’ mean?’” Schmidt said. “Is ‘local’ East Coast? Is ‘local’ a tri-state region? is ‘local’ within your own state or a 30-mile radius?’ I’m hoping to go local as to Alamance County.”

Schmidt also plans to keep the brew-pub active throughout the week. Events will include trivia or game nights, flight nights, live music or brunch on weekends with $4 mimosas.

The project idea started about seven years ago, according to Schmidt. Funding for the restaurant began five years ago, and Schmidt joined the project last September.

Vincent joined the project in spring 2015 to be part of a craft brewing experience — a personal interest of his — and to help better his community.

“I live here in Burlington, my children go to school in Burlington, my wife works in the Alamance-Burlington school district,” Vincent said. “When we moved to town, we really believed in doing anything that we can to have a sustainable, inclusive, viable and, quite frankly, fun and rewarding place to live.”

Vincent said being a part of the cooperative opportunity is an important choice for the community — one that can make a big difference. These types of projects help build local communities one brick at a time, according to Vincent.

“If all of us, all humans, spent more time trying to think in terms of how to cooperatively improve, then I just can’t help but think that not only Burlington, Alamance County or Elon would be a better place, but the entire world,” Vincent said.