African Diaspora LLC offers a space for individuals to express themselves 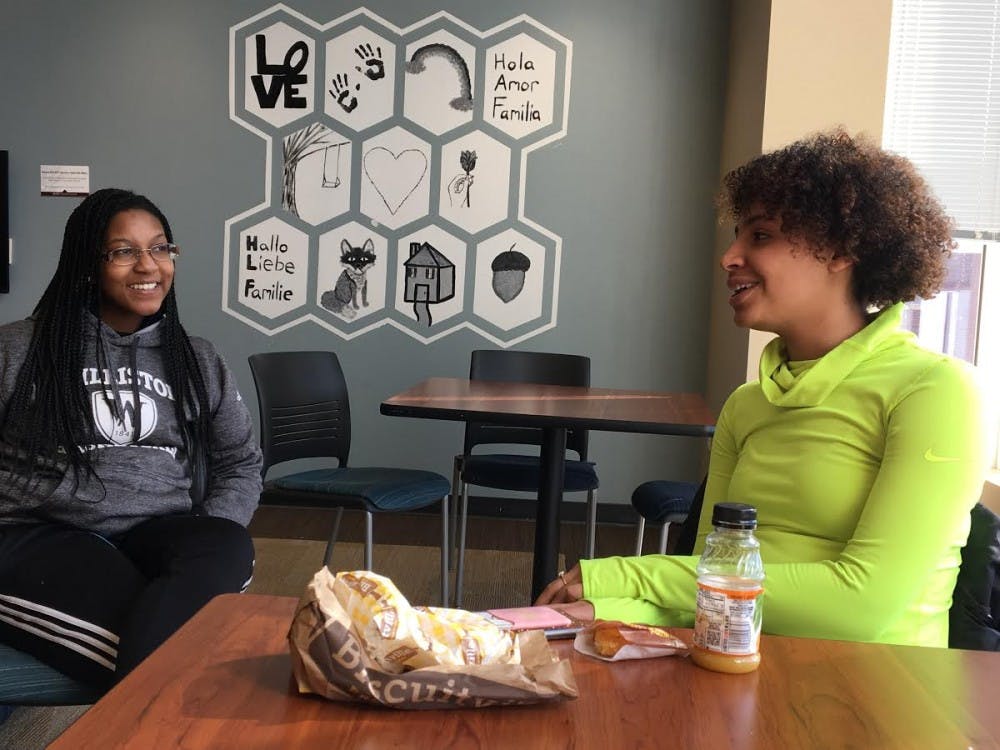 The lights in Irazu Coffee are low. An empty microphone stand waits patiently beside a speaker as a tangle of cords lay across the stage.

There are no more than 13 people in the room. Soon, low-key background music exits the speaker and fills the air, and students begin to mess around on stage, lip-syncing to the songs they like and joking around about what they should perform in the show.

After what is determined to be enough time has passed, the show begins: It is open mic night for the Black Solidarity Day Conference. One girl performs an a cappella ballad; another sings to music. Others perform a comical rap duet. All the while, people are happily clapping along, laughing and enjoying each other’s company.

Then a student stands up to read two of her poems, and the room falls respectfully still. Throughout the night, she has been talking to other students, dancing along to the songs and laughing with everyone else. She has a powerfully comforting presence, nearly maternal. She reads haunting compositions about the pain her father left her and the trauma of racism in the South. Her name is Victoria Gordon, and she is more than a poet, more than a friend, more than a student: she is a leader.

As one of the founding members of the African Diaspora Living Learning Community (LLC), located on the fourth floor of Jackson Hall in the Global Neighborhood, Gordon, a sophomore, currently serves as the resident assistant of the floor. As a queer woman of color, she is intimately acquainted with the experiences some of her residents have on Elon’s campus.

The LLC was created this year to give students a space to discuss African culture as well as issues faced within the African diaspora — the collection of worldwide communities descended from African people. It is a space that Gordon feels is essential because of her residents’ experiences.

Freshman A’Shaela Chaires, a resident of the LLC, values her time surrounded by other students of color.

“It’s a great place where you can be your authentic self,” Chaires said. “It’s a place you can’t find elsewhere on campus. There’s lots of people that share the same experiences you do that other people on campus just won’t understand. So it’s just where I’m most comfortable.”

Chaires said finding a community made up of people with similar backgrounds can have a huge impact on the personal and professional lives of students. “It definitely makes you willing to try harder and push yourself in the classroom, making yourself known on campus, so that we’re not just a number but we actually contribute to the community as well,” Chaires said.

Other students agree. “It’s just a great place to come to after a long day because in classrooms you’re only one or two black people, but when you come on this floor, there’s 15 of us,” said sophomore resident Ciani Foy.

Gordon sees a lot of camaraderie on her floor. “Whether it’s talking about how your day goes, talking about that newest episode of ‘Grownish’ … a lot of people just share their own experience, and I’m glad there’s that openness on the floor, and just the way that the residents move, you can tell a lot of them are like family, and that’s really great ... I’m just really proud,” Gordon said.

But the LLC is more than just half of a floor where students of color can congregate and talk to each other — there are efforts being made to include other parts of campus in the dialogue around the African diaspora.

“I feel like having a space like the African Diaspora LLC definitely helps to improve the support that we get from different students across campus,” Gordon said. “I think that this is a good step in the right direction. I think there’s a lot more to be done. This weekend, we had our Black Solidarity Day Conference, which was really cool.”

Students on the LLC “are expected to aid in the programming and development” of MLK Jr. commemorative events, Black History Month, and Black Solidarity Day, according to Residence Life. These and other events, Gordon hopes, will help get more students involved and encourage more voices to be part of the dialogue.

It's a place you can't find elsewhere on campus. There's lots of people that share the same experiences you do that other people on campus just won't understand. So it's just where I'm most comfortable.

But scheduling conflicts have been a major obstacle in getting some of the events off the ground. The floor was supposed to take a trip to Washington D.C., during which they would visit the historically black Howard University, go to the African American museum and “find some really good soul food places,” according to Gordon. “It was supposed to be a very dynamic trip that [Brandon Bell, advisor of the LLC] and I had planned, but because of the Hurricane [Florence], it didn’t end up happening. It’s the way that Elon culture goes: it’s so busy that it was just hard to find another weekend that worked.”

Going forward, Gordon and other students are excited about what the future of the LLC will bring. The program is expected to expand onto the entire floor by next year, at which time the sitting president of the freshman class, Lauryn Adams, will take over as resident assistant.

Under Gordon’s leadership and guidance, the African Diaspora LLC tenaciously drives the progress of Elon’s social landscape, forging sometimes difficult conversations and giving students of color the visibility they need, in order to dispel ignorance and so that other students at Elon can see them for what they truly are, Gordon said. “At the end of the day, we’re people.”