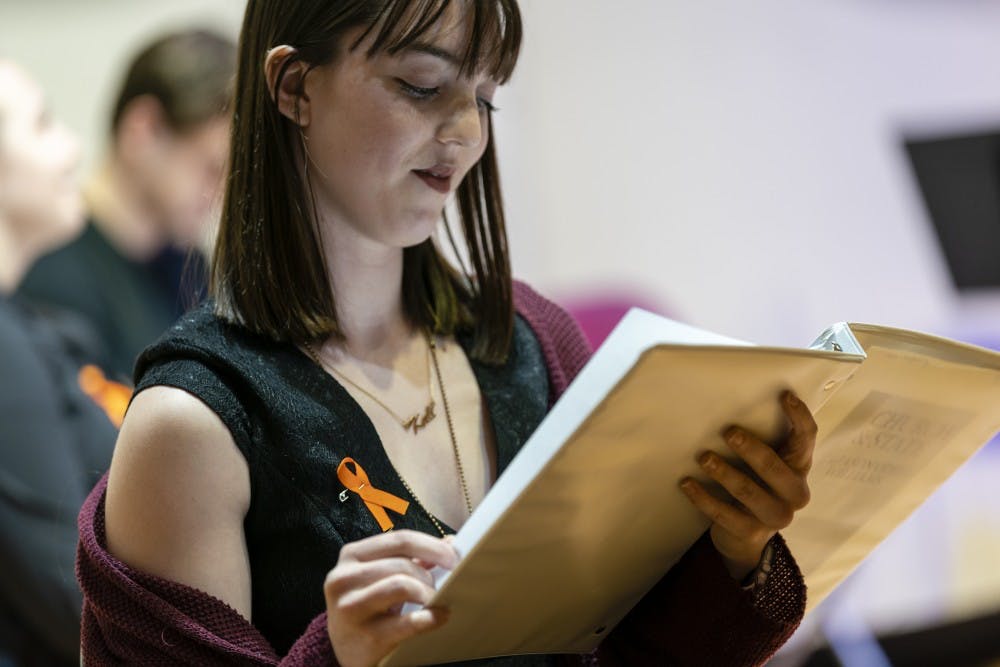 
Elon freshman Kali Clougherty directs a play one year after the Parkland shooting.

But she also has a gift that is helping her honor her classmates.

“Seventeen people are dead, and what can I do to give back?” Clougherty said.

On Thursday afternoon, Clougherty sat onstage with seven Elon actors and narrated a reading of the play "Church & State."

The play, directed by Clougherty, tells the story of Charles Whitmore, a republican Senator in North Carolina running for re-election. But just a week before the election, a shooting at a local elementary school rocks both the nation and Whitmore.

After the shooting, Whitmore struggles with his Christian faith and publicly questions how a god could allow something like that to happen. His remarks spur controversy within the Republican party, but ultimately launch him into victory.

About 100 people from the Elon community attended "Church & State," which explores issues related to gun policy, the Second Amendment, politics and religion. Clougherty and her cast made sure to talk through the controversial issues during the rehearsal process.

At the end of the play, Senator Whitmore becomes a victim of gun violence. His staunchly conservative wife, Sara, changes her views on guns to pass the Whitmore Amendment to create reform measures.

“In our darkest hours, we find our way,” Sara said.

For Clougherty, showing others the pain of her dark hours has helped her cope.

Clougherty said actors can be self-indulgent. But she thinks performance art should be used to make a lasting impact.

“We do this so we can fulfill ourselves and so we can feel good,” Clougherty said. “I’m not a person who can go out and do what March for Our Lives does. I’m not built for that. I’m built for this. Why not use what you’re born to do to send a message and make a difference?”

Sophomore Andrey Vdovenko, who played Whitmore, says he’s a gun owner himself. But after working on this production, his views have shifted.

“I don’t know how I feel about guns anymore because I connect with the tragedies of our country and seek resolution,” Vdovenko said.

Before joining the cast, Vdovenko didn’t know what the show was about. He says working on the show has pushed him to think outside his ideals — which he hopes the audience learned.

“We all are limited only by our perspective. But death, love and the pursuit of happiness unites us all,” Vdovenko said. “Our time is limited, but life isn't. There are more important things out there than political orientation.”

Clougherty and the cast wore all black with an orange ribbon to the performance. The ribbon, Clougherty said, is representative of her former classmate and fellow performer Jaime — who was a victim of the shooting.

At the end of the show, the cast had a talk-back with the audience and answered questions. For Clougherty, directing this play helped process all her emotions today.

“It’s always there, but I don’t want to dwell or be sad,” Clougherty said. “I wanted to make today a beautiful day — and it was.”