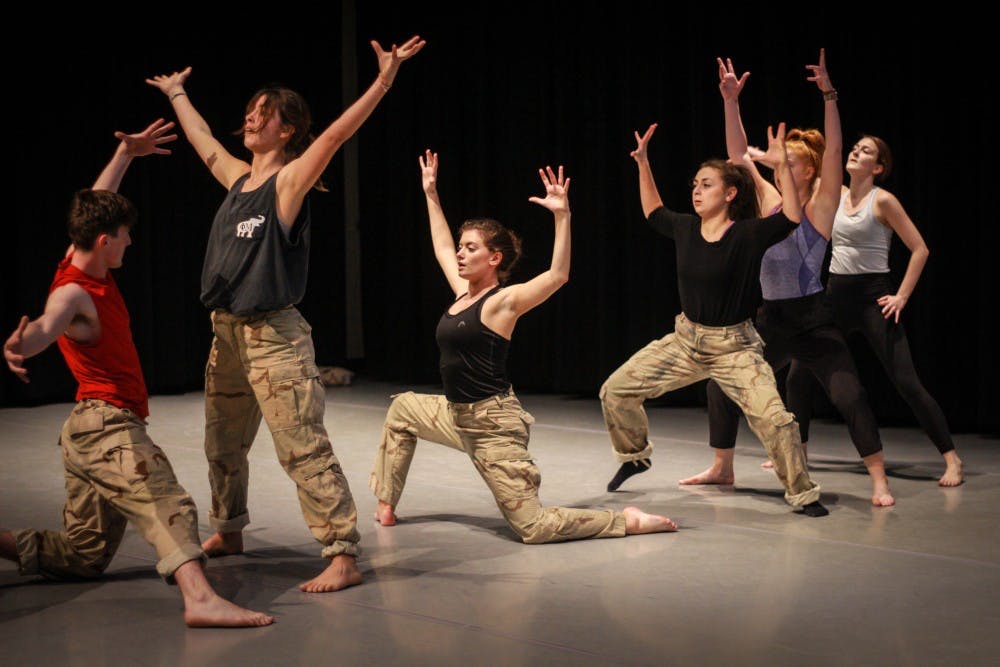 Student dancers rehearse choreography in the Center for the Arts as they prepare to open their show on Tuesday, Feb. 26.

Every year, Elon University presents a dance concert celebrating Black History Month. And in his time as a student here, senior Tres McMichael has only missed one.

This year’s concert, named SAGA, is choreographed and directed by Jason Aryeh, assistant professor of dance, and honors Black History Month. Conveying the story of the successes of African culture, the show includes African American, Caribbean and West African dance styles as well as acting-based performances. In the past, the show has taken place in Whitley Auditorium and the Black Box Theatre and is now being performed in McCrary Theatre, a bigger space than previous venues.

McMichael said since his first year in the show, he has seen the size of the audience increase significantly.

WHAT IS AFRICAN DIASPORA?

The mass dispersion of African people. Commonly used to describe the effects of the Transatlantic Slave Trade.

The importance of this year’s concert to McMichael is emphasized by the fact that 2019 marks 400 years since Africans were first brought to the United States as slaves.

“‘Saga’ means a tale, a story about a large history of a group. So it’s appropriate that the show this year is named SAGA because we’ve been here for 400 years. We’ve had every occupation there is to have, we’ve been a very resilient group in America,” McMichael said.

For senior Breia Kelley, performing in SAGA gives her the opportunity to showcase her own background through dance.

“Being a [musical] theatre major, I love to perform. And so if I can perform and get a message out and celebrate my heritage and where I come from — then I love it,” Kelley said.

Often black history and black art are not completely incorporated into the story of the United States. While the performances show the many achievements of African Americans and the African diaspora, it also portrays the challenges that persist — something Kelley hopes the audience will take to heart as they watch.

“I hope [people] understand how far the journey has been and how far we have come, but also that they understand some things have not changed,” Kelley said.

SAGA will be showing at 7:30 p.m. on Tuesday, Feb. 26, in McCrary Theatre, wrapping up the events and celebrations for Black History Month.

“I think art has the power to have social change and the power to remind people of certain narratives that are not always on the main stage. So I think this is a powerful show to close out Black History Month because it’s put on such a grand stage and it’s free and it’s accessible and it’s open to everyone,” McMichael said. “What better way to close the month than a celebration of inclusivity and one that everyone can join in?”