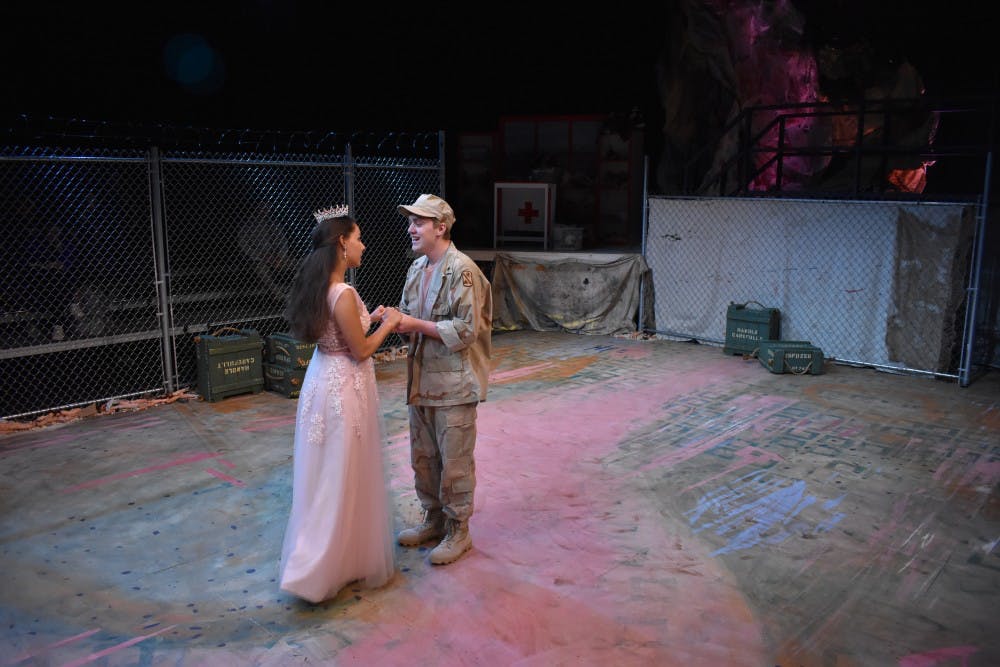 Senior Tess Tregellas thinks audiences may have a reaction to “Trojan Barbie” that is comparable to how they feel hearing a baby cry.

“There are some physiological reactions that are hard to control — it’s in our DNA, almost,” Tregellas said. “When people watch the show, they may not know why they’re sad, and it’s a little uncomfortable.”

The play examines how Americans experience war through stories and images in the media — particularly how the survivors of war, who are usually women and children, are frequently the stories lost.

“It’s supposed to be a little uncomfortable — we’re very comfortable here at Elon, and there are other people who are not, so it’s just a little reminder,” Tregellas said. “It’s heavy, but it’s real. It was written thousands of years ago, but you can turn on the news and be like, ‘That’s a very similar story.’”

Elon University’s production of “Trojan Barbie,” written by feminist playwright Christine Evans and directed by Assistant Professor Kim Shively, follows Lotte Jones, a British dollmaker who decides she needs to get “more involved in life.” She leaves her doll repair shop for a cultural tour for singles in Turkey, and while on a tour of the ruins of Troy, finds herself swept away from the present day into a parallel universe — an ancient prisoner-of-war camp right out of Euripides’ “The Trojan Women.”

“People are scared of the Greeks,” Cohn said. “It’s a big challenge to make relatable to a modern audience.”

Shively believes that in order to prevent alienating an audience with Greek tragedy, it’s important to capture the most human elements.

“The reality is, the performers we love live truthfully, with heighted stakes no matter what they’re doing,” Shively said. “That’s why we’re attracted to them — because they feel deeply, they experience everything deeply, and they share that experience with us.”

Junior CJ Porterfield works as a dramaturg — or literary adviser. He helps the actors understand the context of the show so they can be informed on both Greek mythology and the plight of the Trojan women to get out of refugee camps as well as the modern day references to war.

“When they overlap, nothing has really changed in terms of the way we treat war and the reasons we go to war,” Porterfield said.

Under Susanne Shawyer, assistant professor of theatre, Porterfield and the other dramaturgs compiled a 65-page document that actors would be able to use as a reference. The play’s contemporary characters interact with Greek history and mythology, and it’s important the knowledge of the past informs the present-day cast.

In his research, Porterfield noted that there was ample information on Hecuba’s son, Paris, but much less on Hecuba herself.

“All the identities of women in the Trojan War are based around men,” Porterfield said. “Christine Evans asks why women survive war, but they’re talked about the least. She’s trying to bring that idea to the forefront and dramatize it on stage.”

The script pulls from real-life horrors from American-involved combat in different countries — from Vietnam to Iraq.

“Whenever they reference something horrific, it actually happened somewhere in the world,” Porterfield said.

To understand the themes and stakes of the play, the cast and crew Skype-called Bart Pitchford, a U.S. Army veteran and Syrian refugee scholar. They talked about his memories working in refugee camps and used this information for their roles.

“You’re often force-fed this narrative that is chosen by the media,” Cohn said.

The violence that occurs in the show is stylized, movement and dolls are used to represent atrocities. Shively decided early on that there would be no guns in the show.

“I trust that our audiences are intellectual and savvy and have great imaginations,” Shively said.

“Trojan Barbie” uses dolls to convey complex ideas about the consequences of war. A marionette is used to represent a child who is killed.

“It’s better than having violence on stage or a doll that looks like an actual child,” Cohn said. “It leaves so much up to interpretation and lets the audience fill in the blanks. The audience can picture a thousand different scenarios, and it’s best if you let them.”

Tregellas, who plays Lotte, did her own research on the Syrian refugee crisis to increase her understanding. Her character interacts with the dolls on stage, and Tregellas has given thought to the connection dolls have with people. Dolls have the ability to make the audience uncomfortable, but they can also be a tool to connect them to the history and the storyline.

“Lotte has this need to repair things, and I think we all do in some sense,” Tregellas said. “There’s this maternal instinct that I think a doll brings out historically through women and this need to take care of something. If we can connect with a doll, a plastic thing that is so easily broken, what’s stopping us from connecting to human beings?”

Shively has discussed humanitarian issues with the cast in many little ways throughout preparation for the show. The students have had only 16 days of rehearsal before the Winter Term show opens for 10 performances. They’ve prepared in class seven days a week, 9 a.m. to 6 p.m., from blocking scenes to Skype-calling a veteran, but the frequent, reflective conversations are necessary.

“I continue to tie it into our daily news cycle,” Shively said. “We’re still debating issues over torturing prisoners when these things have been debated thousands of years ago. We’re still making the mistakes of yesteryear.”

“Trojan Barbie” captures women at a transition period after the war.

“It’s important to make that connection,” Tregellas said. “It’s a Greek story of a war ending and what happens to the women, and that story is still happening now.”

“It’s often easier for us to live in a distracted state, focused on social media, focused curating the perfect life, focused on our own existential crises. And the lessons of the Greeks are still important and still valuable,” Shively said.