But the next goal is systemic change 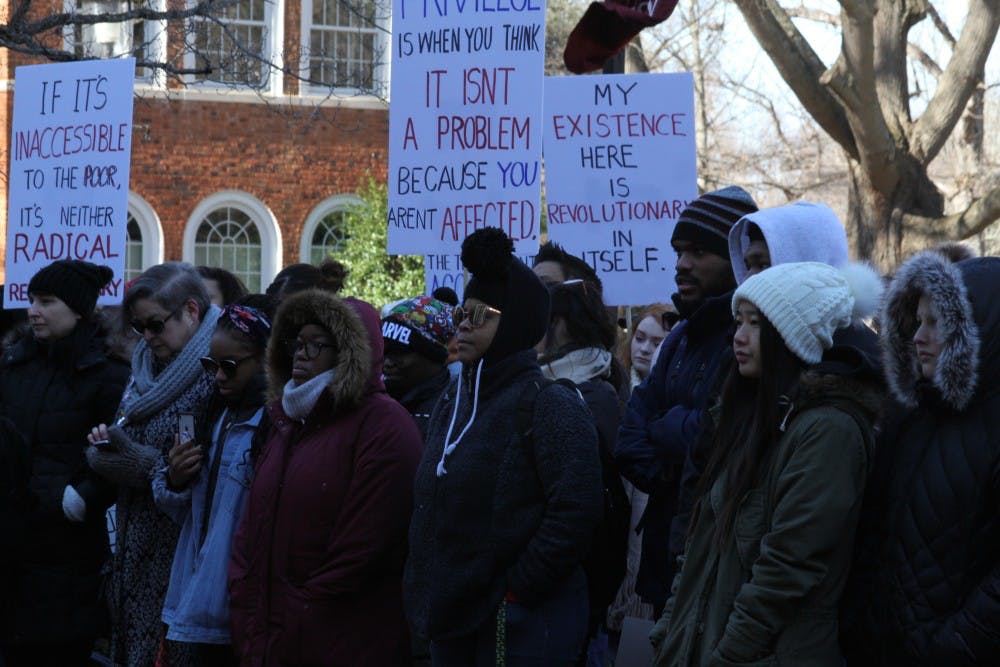 
Students gather with posters for "Privilege Check," an event organized for minority students to share their experiences.

Around 100 Elon University students, faculty and administrators spent their Martin Luther King Jr. Day bundled up in front of Alamance Building and listened to the stories of students who’ve felt oppressed on campus.

Last week, the Barstool Elon Instagram account, an affiliate of Barstool Sports – a sports and pop culture blog, posted a video – which has since been deleted, of members of a historically African-American sorority, performing a tradition. Barstool compared the group to a cult.

Later that week, a whiteboard in the Koury Athletic Center was defaced with racist and vulgar imagery, including swastikas, racial slurs and references to the Ku Klux Klan.

Between these two racially-charged incidents, junior Kinsley Cuen gave a group presentation in her COR Capstone class, “Globally Networked Age,” on poverty and the work-life balance. Her part of the presentation regarding the economic class disparities at Elon was met with insensitivity, which propelled her to organize a rally for inclusivity in less than a week with administrative support.

Fed up with her experience last week in class, Cuen took to social media the next day to share her experience. Within a few hours of posting an Instagram story explaining what happened, she received around 150 responses from students, who thanked her and shared stories of their own with her — stories of bias, discrimination and feelings of unbelonging.

She wanted to create a space for students to be vulnerable with each other.

“I really wanted students to be able to come and share their stories and feel like they have a voice and be heard, and I’m glad that there was some of administration there to hear that as well,” Cuen said. “I hope it inspired people to keep using their voices.”

An estimated 100 people showed up today to listen and voice their experiences, observations and concerns for an hour and a half in the dry, below-freezing weather.

SGA Executive President Kenneth Brown Jr. spoke about inequalities on campus and being a low-income student. Junior Arianne Payne read a poem she wrote about being a first-generation college student. Junior Nabriya Ware detailed some of the health struggles and administrative issues she faced in the fall. Senior Jeff Leu talked about his discomfort on campus during the 2016 presidential election. Senior Mariatu Okonofua, the daughter of an immigrant from West Africa, spoke about the pressure she faced in middle and high school to go to college.

“I knew the second I got to middle school that if I didn’t get good grades I wasn’t going to make it to college,” Okonofua said. “Every day of my high school career was go to swim practice because maybe you’ll get an athletic scholarship. Go to soccer practice because maybe someone will accept you. Get straight A’s. Do IB. Do AP because that’s the only way you’ll ever make it to college.”

But after her freshman year, she wasn’t sure she’d be able to return to Elon because she and her mother couldn’t afford it.

“Fortunately, the summer of my freshman year, I got an email from Patrick Murphy, who told me I was elected for a scholarship. Fifteen thousand dollars, which, for some students at this school, is pocket change but changed my entire life and made it so I would be able to go to college,” Okonofua said. “That I would be able to see my friends. That I’d be able to continue on this journey that so many people like me are simply not able to experience.”

On and on, person after person took the stage to share what they’ve seen, heard and experienced as a minority on campus.

The straw that broke the camel’s back

Before the protest, while Cuen was presenting to her COR Capstone class, Cuen had her classmates enter their own information in a Pew Research Center analysis that allows users to calculate where they fall in terms of economic class in comparison to the rest of their respective counties and the rest of the U.S. She then showed her classmates a report by the New York Times outlining Elon students’ economic mobility.

Cuen then had the class discuss the internship requirements business and communications majors must fulfill to graduate.

“Do you think this is a fair requirement? Do you think it targets students who have financial need or who just are not ... economically able to do this, and how can we fix this? What's another alternative we could present to them?” Cuen said she asked the class.

After a moment of students discussing amongst themselves, the class reconvened. One student raised his hand and, according to Cuen and her professor, said, “Poor kids should not go to private universities. Poor kids should go to community colleges. If you can't afford the luxuries here, you don't need to be here.”

The remark made her feel like she was “on fire,” and she was disappointed when her professor, Tony LeTrent-Jones, didn’t challenge the student on his claim.

The next day, LeTrent-Jones, adjunct assistant professor of management, gave Cuen feedback on the assignment. She called the presentation “a bit demoralizing for students in the class,” according to Cuen.

“I mean, what if somebody put her down? She would not appreciate that,” LeTrent-Jones said in an interview. “She didn't really. But she wanted me to put him down.”

Though LeTrent-Jones sympathized for Cuen in regard to familial and financial struggles growing up, she didn’t agree with Cuen’s frustration.

“We need to hear different perspectives, and part of the assignment, that thing was, it was a team-led class session. So the students on the team during the presentation were supposed to lead the discussion,” LeTrent-Jones said. “So she should have, if she felt he needed to be challenged, not meanly, but challenged, she should have done that.”

That day, Cuen decided if she woke up the next morning and was still upset about the comment in class, she would do something about it.

When she woke up the next morning still agitated, she decided to hold “Privilege Check.”

But it wasn’t enough for Cuen to stop at having a rally.

“The first goal is to open the space and let students actually feel like they have a voice,” Cuen said. “The second is to make systemic change. There is a goal here of changing a system. That goal is just not as quick as having a rally.”

Last week, Cuen met with President Connie Book, Associate Vice President for Campus Engagement Randy Williams and Director of the Center for Race, Ethnicity, & Diversity Education (CREDE) Tyrone Jean, all of whom supported the rally and want to help enact a larger change.

Williams and Jean were present at the rally, along with university Chaplains Jan Fuller and Joel Harter and Vice President for Student Life Jon Dooley.

Cuen hopes the changes she sees at Elon include making bias reports against professors public record, expanding accessibility for students with unpaid internships and creating a community within the CREDE to support students with high financial need.

"If in five days I can find a rally and get people to attend, if nothing productive comes out of it, I’ll make a stir again. I’ll make something," Cuen said. "I’ll say, 'All these students came and spoke and clearly nobody listened,' so let’s make them listen again. And I’ll keep doing that until something happens."