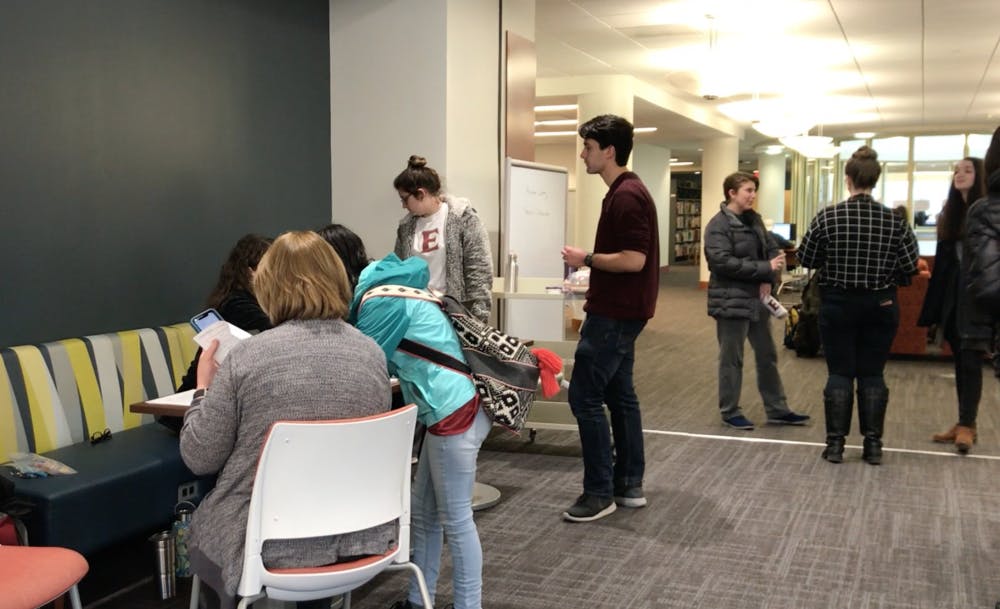 Students gather in the Belk Library to hear volunteers share their stories at the Human Library Project on Jan. 15, 2018.

Belk Library’s second floor wasn’t filled with its normally hushed voices and busy workers this Tuesday. Instead, the chattering of the Human Library Project echoed across the floor, and no one seemed to mind.

Held from 11 a.m. to 2 p.m., the Human Library Project provided attendees the opportunity to “read” a book by chatting with the human volunteers who offer up their stories. Among the 14 different books at today’s library, stories discussed identities from different religions, races, sexual orientations and interests.

The event allowed readers the opportunity to speak candidly with the books through one-on-one conversations. Elon University senior Kayla Gradzki attended the event as a reader for her winter term class, "Why Were These Books Banned." Her professor asked students to attend the event to analyze how a story told from a human perspective avoids censorship. Gradzki says she was surprised by the candor of the books.

“I did not think it would get as personal as it did,” Gradzki said of one of the books. “Nothing was left out, and I was able to ask as many questions as I wanted without having her get uncomfortable with the situation.”

William Moner, assistant professor of communications, shared his story of defining creativity. He said he chose to participate in the event because he liked the informality of the conversations and the ability to learn about what aspects of creativity people struggle with.

“As I learn more about how people want to use creativity in their lives and their issues, people talk about their lack of confidence when it comes to their own creativity, which is detrimental to openness,” Moner said.

Moner said he hopes his book at the Human Library helps foster thinking to approach creativity in a new manner and to allow for better communication.

The Belk Library, Colonnades Neighborhood Association and Learning Assistance sponsored the event. Organizers of the event declined to comment in an effort to protect the vulnerability of the human books.