Despite smaller crowds, the event brought feminists and supporters from around the country to the capital 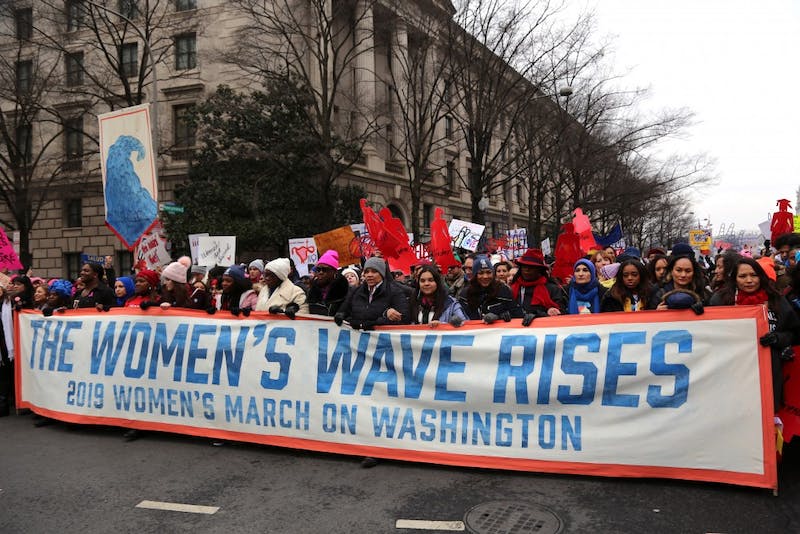 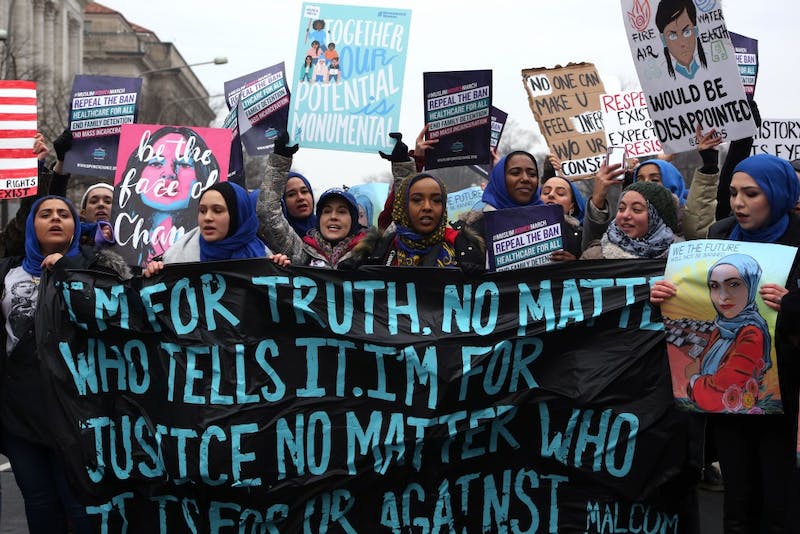 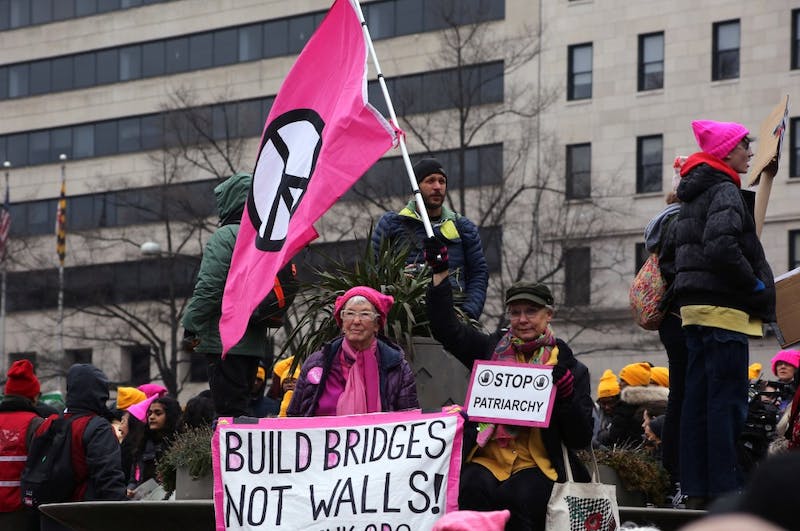 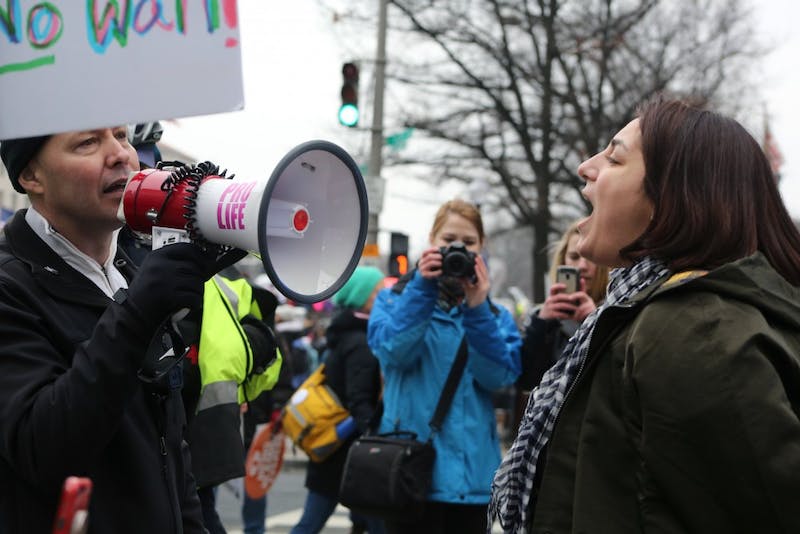 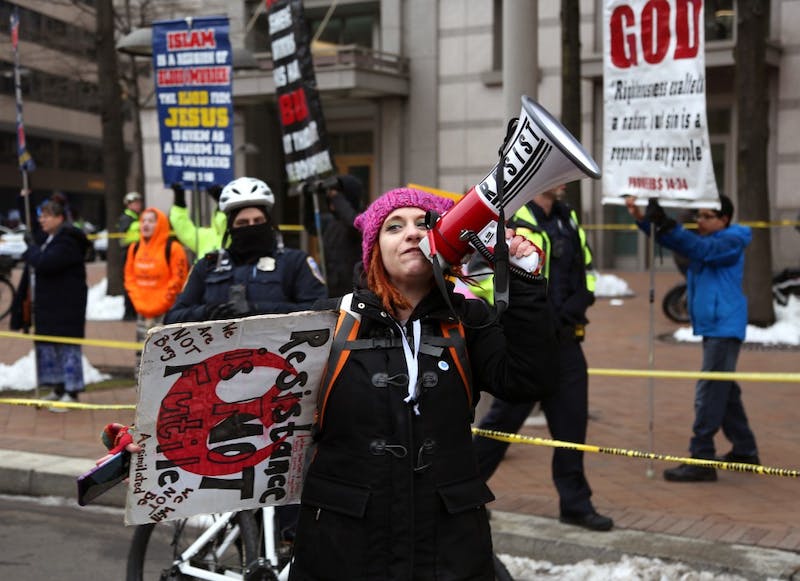 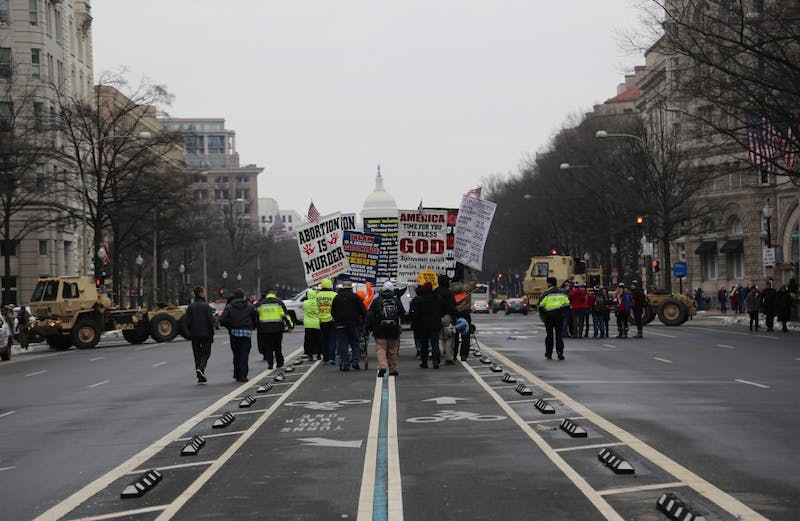 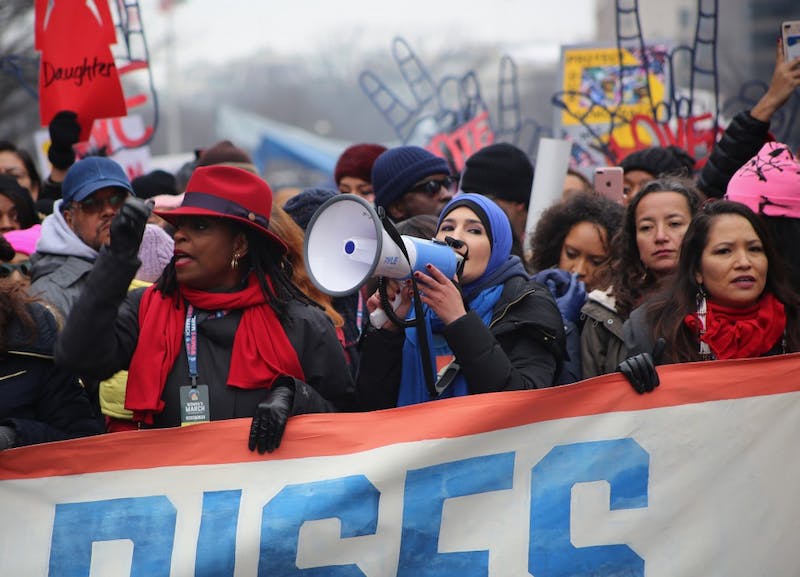 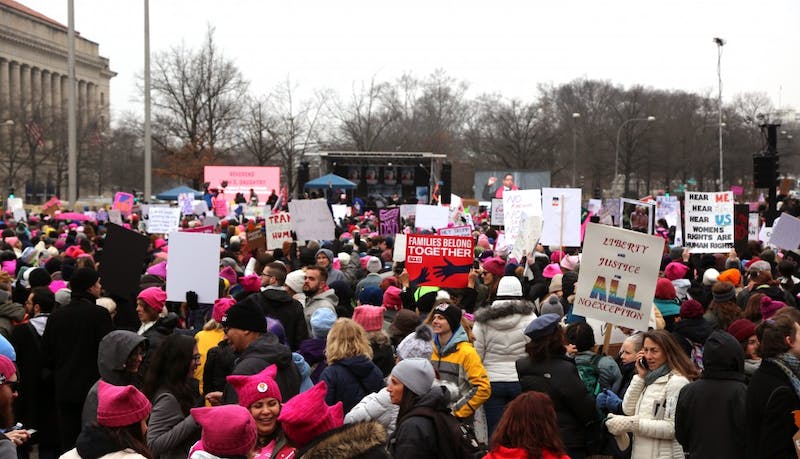 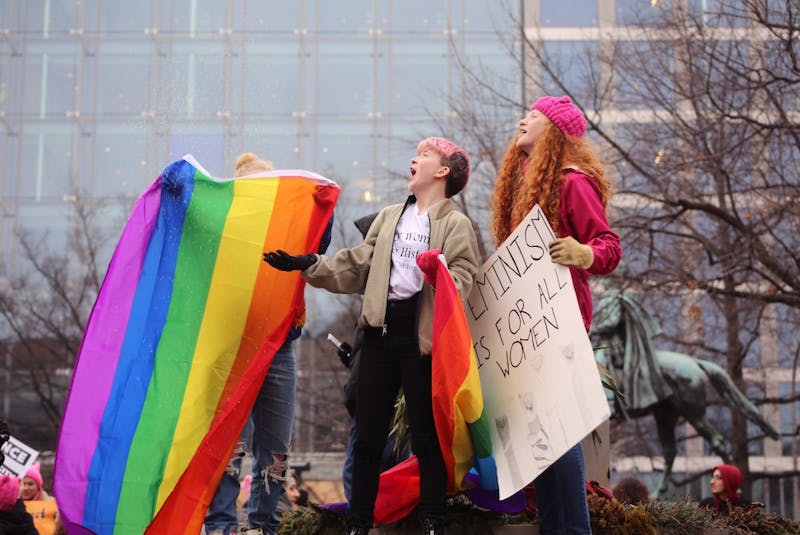 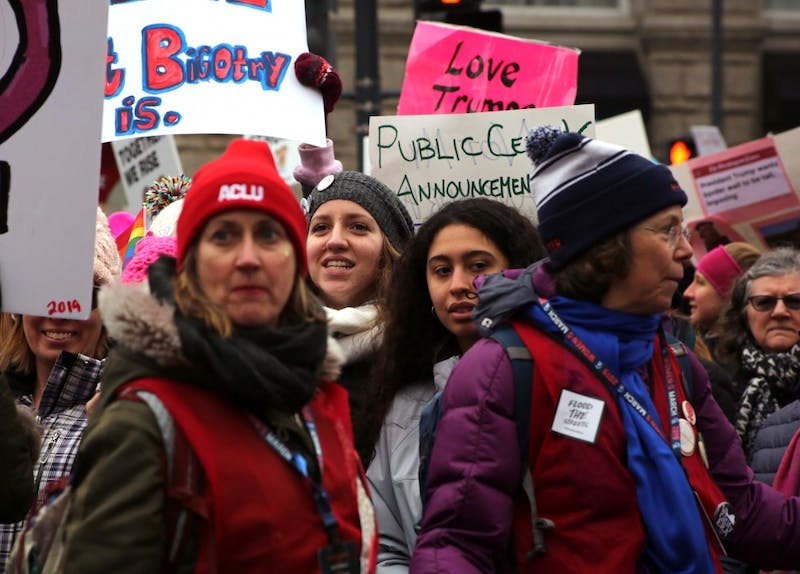 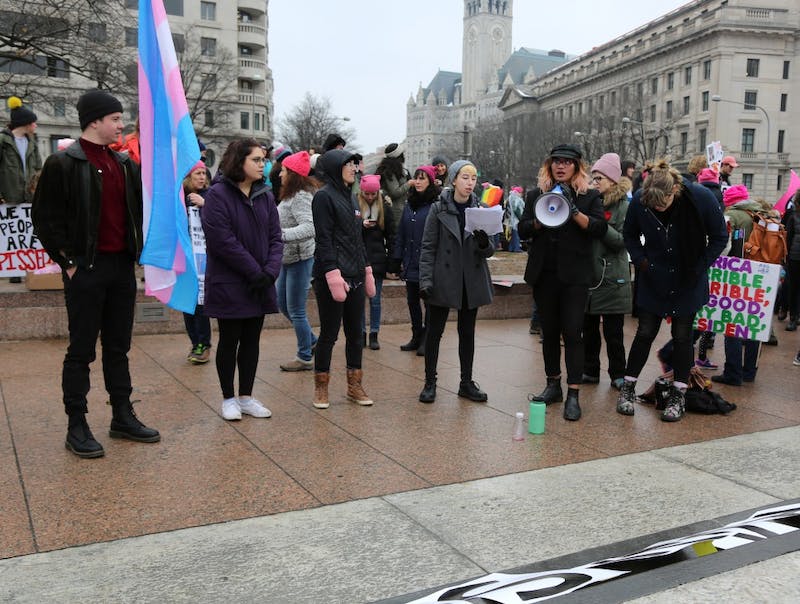 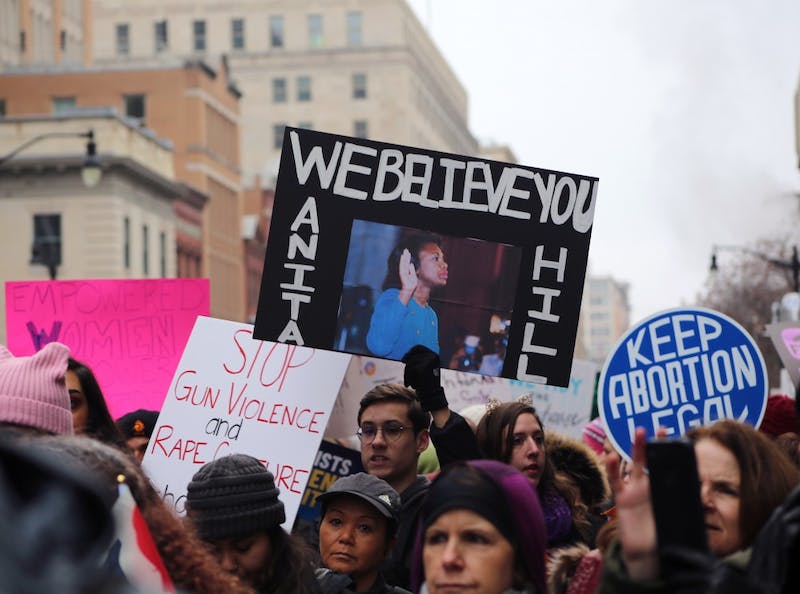 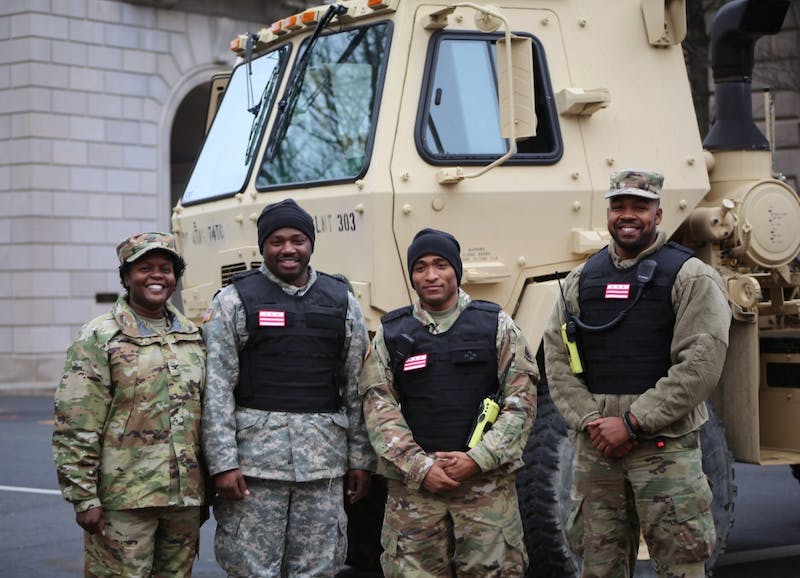 First took place on Jan. 19, 2017, the purpose of the march was to advocate for women's rights, reproductive rights, LGBTQ rights and others. It has been hosted annually since and has inspired similar marches around the country and the world.

Even though Stallsmith and Chergui were shoulder-to-shoulder with fellow protesters, the event attracted much smaller crowds than in the past two years. But that didn’t stop Stallsmith or Chergui from proudly marching for women’s rights.

"I am here because I know most of the people here are standing up for all women," Stallsmith said. "I am here on the faith that all these people around me genuinely want everyone to have the same rights."

This faith eased the decision to skip her Winter Term class on Friday. For the self-proclaimed feminist, nothing could trump marching for women's rights.

Stallsmith and Chergui left Elon on Friday to attend the march, which started at 11 a.m. in Freedom Plaza the following day. Bundled in jackets and scarves, the two roommates marched arm-in-arm down Pennsylvania Avenue.

“I really believe in women, in our voice and what we can do,” Stallsmith said. “The government doesn’t represent us very well and we need to stand up for our rights and the rights of the marginalized. … I want to march for all the people who can’t.”

Chergui came to the march to stand for Muslim women, a marginalized community with which she identifies.

"The Women's March is a powerful movement because it isn't just there for white cis-women," Chergui said. "It is there for women of all genders, identities, races and religions."

To her delight, she was joined by dozens of Muslim women, including one of the marches organizers, Linda Sarsour.

Sarsour spoke to the marchers during the rally program about the need for Muslim women to not only speak up for their rights, but the rights of women of all faiths.

"I saw a lot of Muslims wearing blue hijabs today and it made me feel so welcome," Chergui said. "It made me feel proud to voice my religion."

Obstacles for the women's wave

This was the second day in a row that protesters filled the streets of the capital. The Women’s March was preceded by the 46th annual Right to Life March, the largest pro-life event in the country.

With the two marches beginning almost exactly 24 hours a part, a handful of pro-life supporters decided to extend their activism by attending the Women’s March as anti-protesters.

They made their presence known by using a megaphone to preach about the sin of abortion and by holding signs, which read “Feminists are terrorists” and "Women belong in the kitchen."

Metropolitan Police and service members of the National Guard encircled the anti-protesters and kept any violence from taking place.

Col. Renee Gore, who married Berkley Gore '84, was one of the roughly 250 National Guardsmen with the 372nd Military Police Battalion present at the Right to Life and Women's March. Gore said she was happy to keep both protesters and anti-protesters safe over the weekend.

Even with Gore and National Guardsmen present, Stallsmith still felt harassed by the anti-protesters' signs and shouts — not that it made much of a difference.

“They are speaking their voice but it is funny because for every one of them there are so many of us yelling, ‘My body, my choice,’” Stallsmith said. “We are so firm in what we believe that anti-protesters are not going to change our minds.”

But pro-life supporters weren't the only anti-protesters present at the march. For the first time, activists protesting the lack of transgender representation at the Women's March were also in attendance.

Francesca, who declined to share her last name because of security risks, was one of the organizers and along with four fellow activists set up a sign that read "End Transphobia." As the Women's March's rally program continued and with the help of a megaphone, the protesters proceeded to list hate crimes committed against transgender women around the world in 2019.

"The Women's March is about representing all women, but no transgender women have been a part of the march's program," Francesca said. "We came today to raise awareness about that fact and we will keep coming until we are recognized."

Both organizers and volunteers for the Women's March declined to comment on the issue.

Future for their feminism

Ten hours of driving, three blocks of marching and a wave of women made for a great experience according to Stallsmith and Chergui. The two are planning to attend next year's Women's March and hope to bring their activism back to campus.

"I don't want to be someone who says I believe in something and then doesn't support it in my day-to-day actions," Stallsmith said. "I am part of the youth today and we are all the future of tomorrow."

Like previous years, the march in Washington is being followed by a flurry of similar protests around the country — including three in North Carolina. The marches in Charlotte and Raleigh will take place Jan. 26.