After five hours in session, SGA agrees to restructure its organization funding 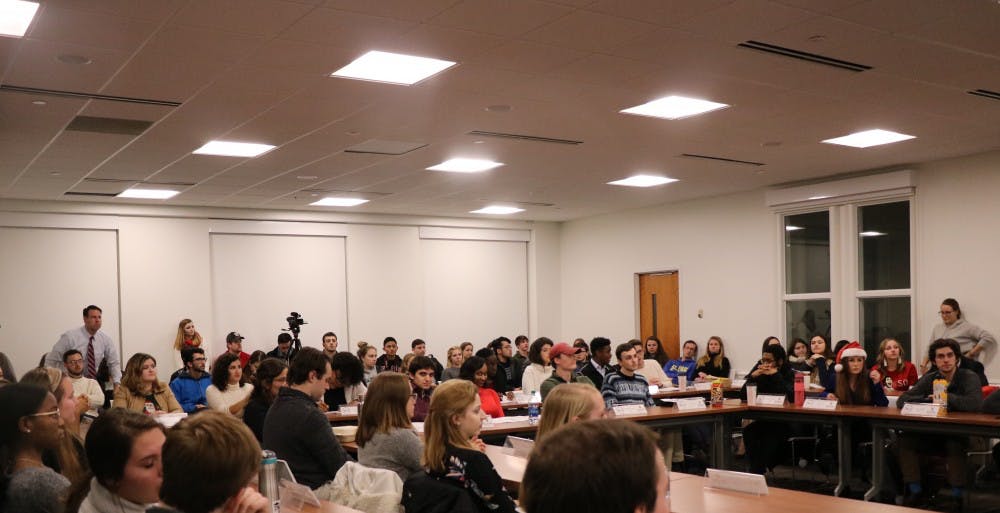 
SGA passes its budget allocation model in its last budget meeting of the year on Dec 6, 2018.

SGA passed a new budget model after a five hour business meeting on Thursday, Dec. 6. Around 40 students came out to the meeting to express their concerns with the budget in an open forum.

After a town hall meeting held on Nov. 29, SGA Executive Treasurer Max Pivonka revised the  Treasurer's Manual to better reflect the needs of the student body.

The new model will now take effect in June ahead of the 2019 to 2020 academic year. If SGA did not pass the new budget on Dec. 6, in its final business meeting of the year, the vote would have been postponed to Feb. 14. The new budget would likely not have taken effect until the 2020 to 2021 budget year unless the senate decided to hold a special session.

Eleven senators expressed they approved of the new budget but they did not want it passed so soon. They acknowledged some of the student body thought the changes were rushed and would benefit from extending the conversion.

The vote eventually passed at 36 to 3 flowing into the early hours of Dec. 7 after much discussion from senators and the student body.

SGA Executive President Kenneth Brown recognized that SGA could have been more transparent through the entire process of restructuring their budget model.

"Could we have done better? Absolutely, you darn tootin'," Brown said. "It speaks to a larger problem in our organization and other student governments face across the country. ... How do we engage with students?"

Brown believes SGA could work better on its communication. Katie Mars, executive director of Elon Volunteers, was upset she first found out about the budget changes from someone's Instagram story on the day of the town hall.

"Other orgs have noticed that we have an outreach issue and we are always working on that," Brown said.

Some organizations under the new budget model can still request to have a fixed budget. This budget would be overseen by Jon Dooley, vice president of Student Life, not the Finance Board.

Not all club leaders were happy with the decision. President of the Alpha Phi Omega service fraternity, Amanda Martinez, said there was not enough time for her organization to raise its concerns.

“As the president of a prominent service organization on campus, I was never once notified of the initial town hall and neither was our advisor,” Martinez said. “The first time I heard of the proposed system was on Tuesday when we were sent the budget after 11 p.m.”

SGA mentioned at its business meeting it had been working on legislation since the beginning of semester. But organization leaders at the meeting expressed they didn’t know about the changes until the Town Hall Meeting or later.

“We were also informed that this has been in the works for months, but why was this the first time we were hearing about it?” Martinez said.

For a comprehensive look at SGA's budget, view our previous article.