How labor laws would affect a union at Elon 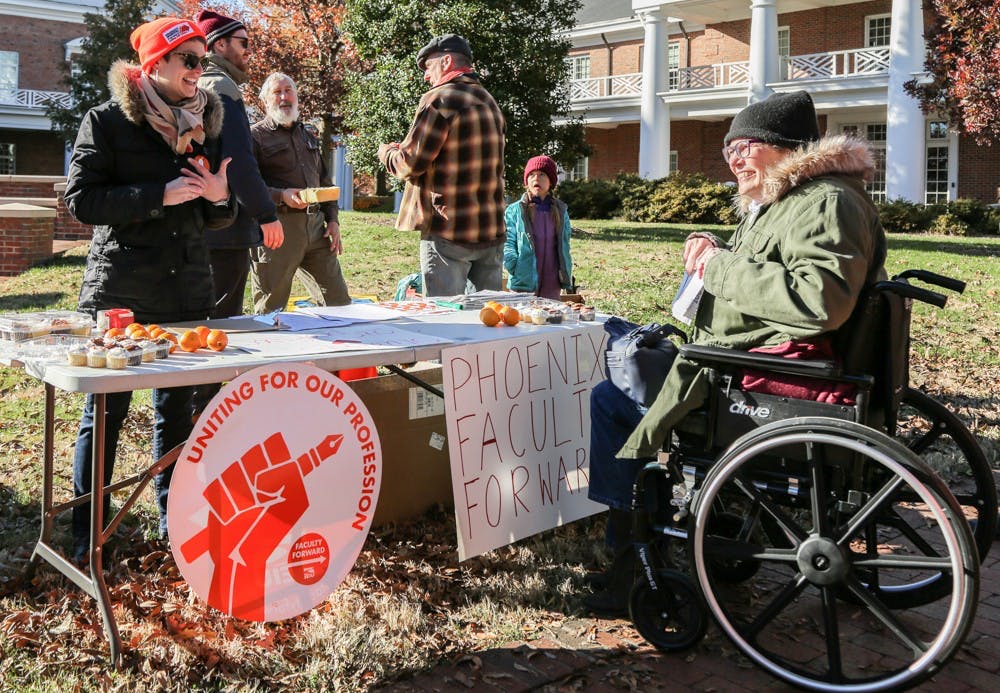 
Sarah Bloesch, adjunct assistant professor of religious studies, welcomes participants to Elon Faculty Forward's first public event on Thursday, Nov. 29. It was during this event that the filing of the first petition to the National Labor Relations Board was announced.

Elon Faculty Forward’s hope to begin the voting process for the formation of its union on Dec. 11 has been dashed because of snow storms and legal disputes with Elon University administration.

Service Employees International Union and Elon administration are in the middle of a series of hearings with the National Labor Relations Board. These hearings will decide which non-tenure-track faculty members will be included within Elon Faculty Forward's bargaining unit.

The first hearing was held on Friday, Dec. 7. No final decision was made and the hearing was extended to Monday, Dec. 10, which was promptly canceled because of severe weather conditions. The second hearing is now tentatively set for Wednesday, Dec. 12.

On Dec. 6, SEIU filed an amended petition with the NLRB altering the faculty members it was trying to represent in an effort to reach its voting start day goal on Dec. 11. It now excludes continuing- and lecturing-track faculty members from the bargaining unit.

Catherine Bush, assistant professor of biology, was one of the organizing committee members of Elon Faculty Forward who broke the news to the faculty that these positions would be excluded.

"We didn't want to leave anyone behind, so this loss is disappointing. But losing these positions will make our case stronger," Bush said. "We had a lot more support from adjuncts because their positions were so much worse off. So this puts us in a stronger position in terms of voting. We are now focusing on the most vulnerable, so they will have the most to gain from a union."

Following its decision, Elon Faculty Forward has been cementing down faculty support for the union in a state with historically low union membership.

In 2017, North Carolina had the second lowest number of union members in the country. According to data from the Bureau of Labor Statistics from the last ten years, on average  2.9 percent of the state's workforce have been members of unions. Four years ago, North Carolina had the lowest number of union membership in the country with just 1.9 percent of its workforce represented by a union.

These low numbers can be attributed to the state’s labor laws, which could affect many of Elon's non-tenure-track faculty members.

If voted in, the union will be required by federal law to represent all employees within its bargaining unit.

Any benefits stemming from a collective bargaining contract between Elon University and the union will affect both union members and non-members.

Union members are required to pay dues in order to support any costs the functioning of the union may incur — Elon Faculty Forward has not released their expected dues. But according to SEIU's Constitution and Bylaws, the minimum dues — which depend on a member's annual earnings — range from $31 to $36 a month. Dues at Duke Faculty Union in Duke University, cost faculty members 1.5 percent of their monthly paycheck, which can be up to $50.

As one of 28 states that have adopted the right-to-work law, North Carolina doesn’t require workers who benefit from a union to join it. Data from the Bureau of Labor Statistics show that not all workers represented by unions end up joining them.

This law makes it more difficult for unions to succeed, according to Jim Bissett, professor of history with a speciality in labor movements, who is a public supporter of Elon Faculty Forward.

"Since they will get the benefits, why would they want to pay union dues?" Bissett said. "Initially there is so much excitement that it will be OK, but over time it could erode the support the union has."

According to Bissett, these laws are "designed to weaken unions."

“It is fundamentally unfair," Bissett said. "The law requires the union to do something for all but allows workers who gain the benefits of membership to opt out of having to take responsibility for it."

Alex van Duijn, media coordinator at the National Right to Work Legal Defense Foundation, has been unavailable for comment since Nov. 27.