Continuing- and lecturing-track faculty no longer represented by union movement

Elon Faculty Forward amended its original petition, removing these two positions in an effort to speed up the voting process 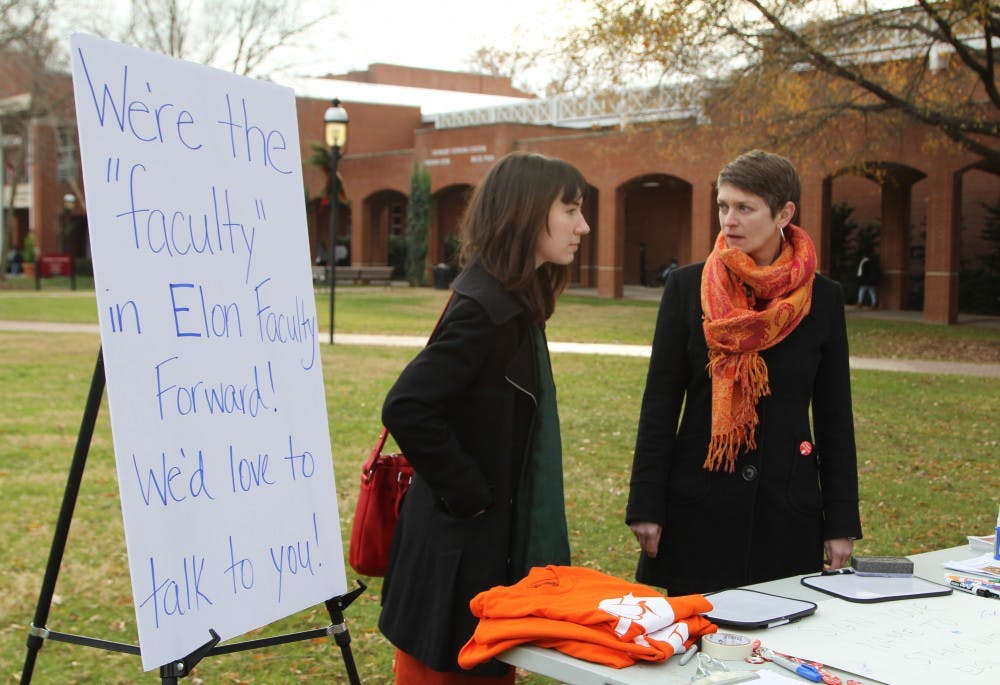 An amended petition filed to the National Labor Relations Board on Dec. 6 removed these two positions from the bargaining unit Service Employees International Union has been trying to get approved.

According to an email sent on Dec. 7 by the Organizing Committee of Elon Faculty Forward, this decision was made in the hopes of quickening the voting process.

"We recognize that the university's arguments with regard to continuing track and lecturer faculty could lead to lengthy NLRB hearings and appeals..." the email stated. "...In an effort to move forward with a union election as soon as possible, we are no longer calling for an election that includes continuing track and lecturer faculty. We hope that this means the university will drop their legal delays, and agree to a fast, free and fair election."

According to the Elon University 2017-18 Fact Book, there are 64 full-time instructors and lecturers at Elon. While no lecturer will be represented by Elon Faculty Forward, the NLRB has not yet decided whether instructors will be included within the bargaining unit.

The first version of this petition was filed on Nov. 29, which was announced during Elon Faculty Forward's first public event.

The petition is also requesting a nine-business-day mail-ballot election starting on Dec. 11, to be counted on Dec. 21.

The first day of the NLRB hearing between Elon University and SEIU was held on Friday, Dec. 7.

"While this is an important step in our effort to establish a voice with the administration, it is also the result of the administration's decision to interfere with our cooperative efforts and delay a democratic vote," stated the same email from the Organizing Committee of Elon Faculty Forward.

During the hearing, no final decision regarding the bargaining unit was made, causing the hearing to be extended to Monday, Dec. 10. But the hearing may be canceled due to a snow storm that, according to the National Weather Service, is expected to dump 14 inches of snow on Winston-Salem.

The vote to form a union can only begin when the bargaining unit is agreed upon by all three parties. If delayed by weather, the hearing would be rescheduled to Tuesday, Dec. 11, the original day SEIU was hoping the vote would begin.

Different groups on campus have been speaking out about their support for this vote to proceed.

Some reactions to union movement

"A critical portion of our teaching faculty colleagues lack the basic support and protections enjoyed by those of us who are tenured or are on tenure-track contracts," the letter stated. "It is time to offer our full-time non-tenure track and adjunct colleagues more equitable working conditions."

The letter also addressed the "shared governance system" that was a pivotal point in Book's and House's responses to the movement.

"While there is a governance structure at Elon University that represents the interests of all faculty, part-time adjunct and full-time non-tenure-track faculty need their own organization to represent their unique interests, enabling them to speak freely in their own meetings, and then bring concerns to administration," the letter stated.

The governance structure being referred to is Academic Council, a committee of faculty members that create and vote on policies addressing different faculty issues.

Two of the 25 members of the council signed the pro-union letter — Professor of psychology Tom Green and Associate Professor of political science & policy studies Jason Kirk.

A letter was also put together by alumni, which was delivered to Book, House and the Martin Alumni Center with 108 signatures.

These alumni not only made their support for the union clear but have also decided to withhold their donations to Elon.

"Until the Elon administration publicly commits to not interfere practically or rhetorically with our [non-tenure-track] faculty's campaign to form a union, we pledge to withhold our donations to Elon," the letter stated. "This is not a decision we take lightly, considering the important role that attending Elon has played in our lives. However, we cannot, in good faith, give to the university until its leadership respects the rights of faculty to democratically organize their union."

Alumni continue to show their support for the union. As of Thursday, Dec. 20, exactly two weeks after the letter was delivered, an additional 37 alumni have signed the letter, which now totals at 145.

The day after the alumni letter was delivered and on the same day as the start of the NLRB hearings, the union movement was the main topic of discussion during the monthly private faculty meeting held on Friday, Dec. 7.

With the concurrence of the faculty, Book suspended the regular business items originally planned for the meeting in order to address the unionization movement.

Book began the meeting with a similar presentation to the one given to the SGA the night before, but then opened the meeting up for discussion.

"We had people on both sides of the issue speak very passionately about why they felt the way they felt," Book said. "I always believe if you can have good dialogue and discourse the odds of you landing in a good community decision are stronger."

Sharon Eisner, adjunct instructor in communications and member of the Organizing Committee of Elon Faculty Forward, spoke for the movement to unionize and was surprised by the response.

"I felt heard, I felt understood. Everyone in here shared a sense of community and I really did not feel the divisiveness I was afraid of. I was scared coming in because we are the lowest on the totem pole," Eisner said. "The energy I felt in here was just supportive of people saying what they felt."

The union conversation is one Book expects to continue.

"This is critically important," Book said. "Any time an employee or a person has to make a decision about who represents them in their employment status, that is a significant decision."

Updated at 2:34 p.m. on Dec. 20, 2018 to include the updated number of alumni signatures on the pro-union letter, exactly two weeks after it was delivered.