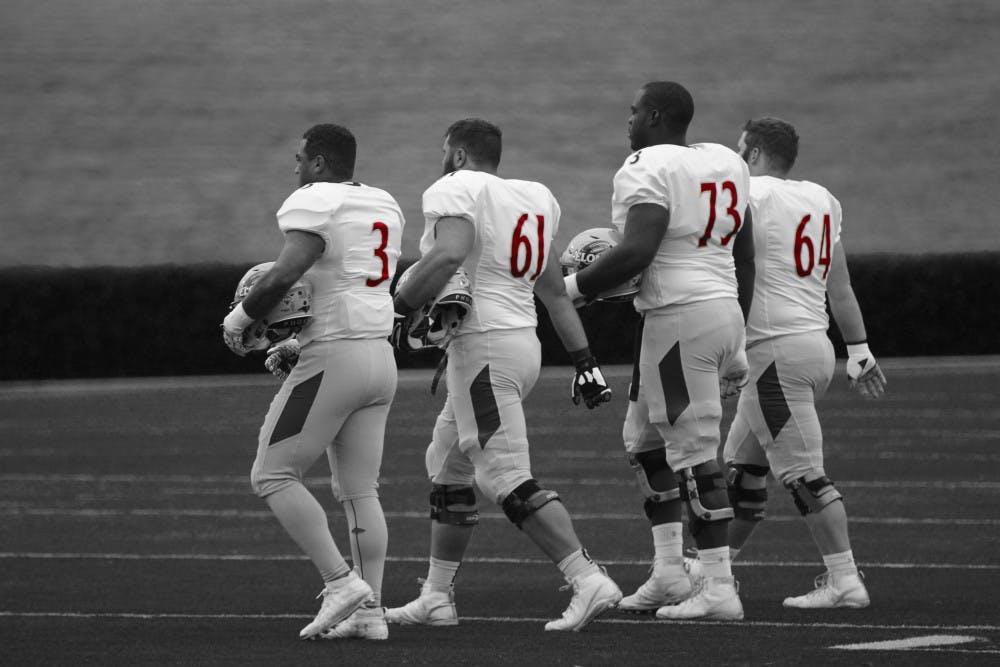 Walking out onto the field at Gibbs Stadium in Spartanburg, South Carolina, to play Wofford College, no one knew for sure whether or not this would be Elon University football’s last game of the season. The ramifications of the game were very simple: win and advance to play Kennesaw State University the following weekend. Lose – and it was the end of the road for this campaign. While fighting until the last whistle, the Phoenix fell to the Terriers 19-7 and marked the end of a season full of ups and downs for the program. But before Elon got to that point, they had a whirlwind of a season that deserves a rewind.

Starting in the Sunshine State

Elon came into the season ranked No. 12 in the Football Championship Subdivision (FCS). The Phoenix had proven itself to be a team to watch nationally last year, making the playoffs for only the third time in program history and returning some key players.

To begin the 2018 season, Elon made their way south to Raymond James Stadium in Tampa, Florida, to take on the University of South Florida Bulls. The team got a chance to play a bigger, stronger, faster opponent and to get exposure on the national stage to start their season. This would be Elon’s only FBS test of the year, and though they were outplayed, they kept the game respectable and took a 34-14 loss on the chin.

Some positives came out of that game as well. Freshman running back Jaylan Thomas was able to scoop up 87 yards on the ground and show that he is able to play, which would prove to be critical later on.

Elon was just two games into the season when Hurricane Florence came bearing down on the Carolinas. Since getting home from Florida, Elon had gotten into the win column with a victory over Furman University during its home opener under the lights at Rhodes Stadium in impressive fashion. No. 15 Elon throttled their No. 21-ranked opponent 45-7 on the backs of a staunch defense and a split attack at running back.

After the Paladins visited, Elon began to turn its attention to the Tribe of the College of William and Mary. This was to be Elon’s first Colonial Athletic Association (CAA) opponent of the year. Head coach Curt Cignetti had the team preparing all week as they should have. But with dangerous weather and poor traveling conditions predicted, all parties involved decided the game could not be played and they would attempt to reschedule the game. But no make-up game was ever established, and William and Mary and Elon were left with one less game played than the rest of the schools in the CAA. This was a blessing of some sorts for Elon, but it also added some anxiety down the road.

The weekend off acted as a second bye-week for the Phoenix as they began to prepare for their game against Charleston Southern University. The game being played would have meant Elon having four games in a five-week stretch on the road, which can physically wear a team down. The only downside to this was Elon being at the disadvantage of playing one less game in their conference. It certainly made Selection Sunday heading into the playoffs even more tense because Elon lost the ability to get one more conference win with the cancellation.

The defining moment of the year for Elon came on Oct. 6 when the team traveled up to Harrisonburg, Virginia, to play the James Madison University Dukes. JMU came into the contest ranked No. 2 in the country and nearly untouchable at home and against CAA opponents. Elon came in No. 9 nationally and feeling good about the performance they had put on so far in the season, but this was the first true test. Elon was able to hang tight with JMU, trading blows and keeping it close at halftime, down only 9-7.

Elon was able to gain the lead on a career-long 59-yard rush by the senior running back Malcolm Summer to give Elon a 20-12 lead. It would come out later that this run, as important as it was to the team, would end up costing Summers the rest of his Elon career as he re-injured his hamstring that sidelined him last year. The handoff Summers took from sophomore quarterback Davis Cheek to turn heads and help put Elon into the national spotlight was the last handoff Summers would ever take in the Maroon and Gold.

The Dukes responded quickly with two touchdowns of their own to take a 24-20 lead with seven and a half minutes to play. After Elon was unable to do anything with its possession, JMU looked as though it was going to clamp down and secure another win over the Phoenix. But with just over four minutes to play in the contest, a divine intervention arrived in the form of a JMU fumble. Scooping up the loose ball was defensive back Greg Liggs Jr. and suddenly the Phoenix had life.

Cheek then went on to engineer a 10-play, 74-yard, game-winning drive capped by freshman wide receiver Avery Jones coming down with the game winner in the end zone. The Phoenix finally topped the Dukes, and Elon moved to 4-1 on the season while looking unstoppable.

“I’m sure it shocked a lot of people, but it didn’t shock us,” said head coach Curt Cignetti of the “upset” win.

As quickly as the Elon success seemed to come to fruition, it seemed to crumble. Summers’ aforementioned injury was unknown until the game the following weekend against the University of Delaware. Summers appeared on the sidelines dressed in his pads and seemed ready to go, but did not see the field in the first half at all. He would then return in the second half in street clothes, confirming that he was done for the game and eventually the rest of the season.

“The injury bug hit us. It’s not an excuse; it’s a fact,” Cignetti said after the final game of the season.

Things went from bad, with Summers out, to worse for the Phoenix offense in the first half against Delaware. With seven minutes left on the clock in the first quarter against the Blue Hens, Cheek was flushed out of the pocket with a heavy blitz. After attempting to cut back and avoid the rush, Cheek collapsed to the turf, holding his left knee. After being held out for the remainder of the game and medical inspection, the Phoenix signal-caller was ruled out for the rest of the year with a torn ACL. Without its starting quarterback or starting running back, Elon had to look for production elsewhere to get it done for
them.

With the injuries sustained by the Phoenix, it was up to young players to fill the hole left in the roster. Thomas filled in at running back for Summers, and sophomore quarterback Jalen Greene took over under center for the injured Cheek. Both players had seen the field prior to moving up to No. 1 on the depth chart, but neither of them had started a
game.

That didn’t stop them from producing. Despite the challenges the team had to overcome, nine players were recognized by the conference for their outstanding play.

Thomas quickly impressed as a starter, earning the CAA Offensive Rookie of the Year award for his effort. Thomas was able to accumulate 761 yards in 115 tries over the course of eight games played. Couple that with some receiving yards and five total touchdowns, and Thomas made his case for the best young offensive player in the
conference.

Elon hit a rough patch at the end of the year, suffering some major injuries, which resulted in the team losing three of their last five games to end the year. Despite this, Elon found itself back in the FCS Playoffs for a second year in a row. They drew a match up with the Wofford College Terriers in Spartanburg, South Carolina. With Greene struggling passing and going up against a good run defense, Elon decided to go with senior Daniel Thompson under center, hoping to make it to the second round of the playoffs for the first time
ever.

This was Thompson’s first start since 2016. The senior lost his starting job last year to then-freshman Cheek and then was moved down to No. 3 on the depth chart when Jalen Greene took over the backup role. But it was Thompson nonetheless whose shoulders the season rested upon in the playoffs.

Elon seemed as though they were going to keep the game competitive, even leading going into the break at halftime 7-6. But with the Terriers stepping up their defense and scoring 13 unanswered points in the second half, Elon was left once again disappointed after the first round.

Elon has a lot to be proud of this season. They showed early in the year that they were a force to be reckoned with, and without some critical injuries, they very well could have competed for a CAA regular season title. But with the tough competition in the conference, as shown by six teams making it into the playoff bracket, the weaknesses created by their injuries were exposed, and Elon was left with a less-than-desirable result to finish the season.

But there is always more to look forward to. For freshman defensive back Cole Coleman, he knows just how far this program has come since this senior class stepped Under the Oaks.

“Hats off to our seniors. They’ve done a great job not only turning the program around but rebuilding it for the future,” Coleman said. His head coach echoed that same sentiment. “I don’t think you can minimize the accomplishments over the past two years in turning this program around,” Cignetti said.

Although the loss of talent from players like Messer, Summers and many offensive linemen due to graduation, the young players for the Phoenix have proven that they will be the ones to carry the torch going
forward.