Board in Moseley Center tackles topic of sexual assault with #MeToo 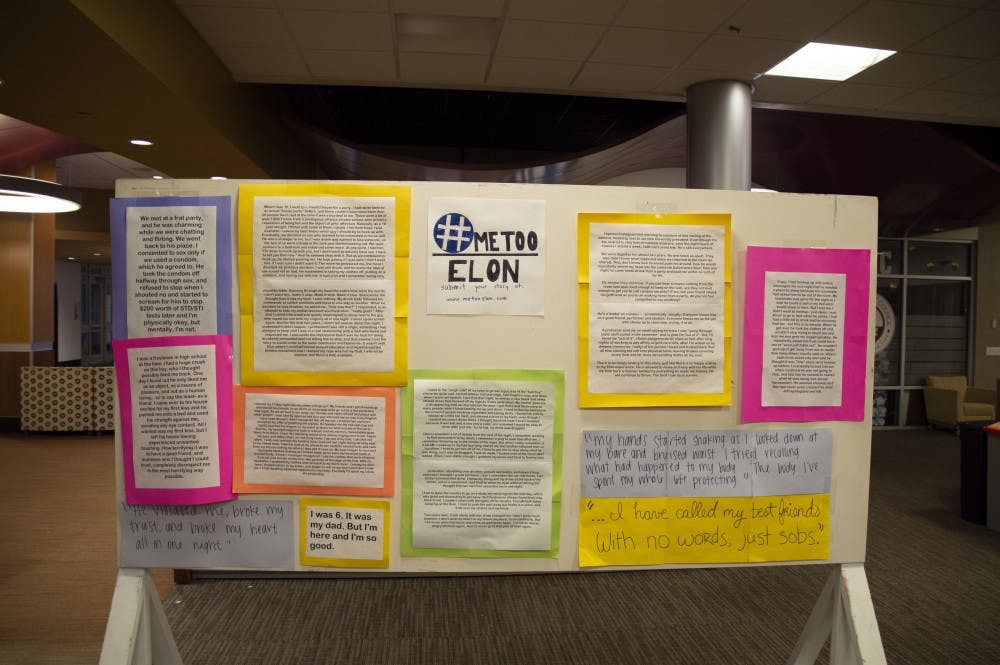 A collaboration between two Elon organizations led to the creation of a #MeToo board, where students have anonymously shared their experiences with sexual assault.

Through a collaboration between Students Promoting Awareness, Responsibility, Knowledge and Success (SPARKS) and the Gender and LGBTQIA Center (GLC), a #MeToo board has been set up in Moseley 106 to share testimonies from individuals who have experienced sexual assault.

The board was introduced to Elon University’s campus last year. Flyers were scattered around school asking people to submit their experiences with sexual assault anonymously through a website established specifically for the project. Their stories were printed out and put on the board, which was placed in various spots around campus including the Koury Athletic Center, Dwight C. Schar Hall and Moseley Center.

Senior Kendall Kynoch, a member of the GLC’s staff, said the main idea behind the board was to bring the #MeToo conversation to
campus.

“It is such an important topic,” Kynoch said. “And while people know it’s something that is going on, it was also important to show that this was happening on
campus too.”

The board was initially set up by senior Ryan Wells, junior Jacob Stern and gender-violence response coordinator Felicia Cenca, all of whom felt this was an effective way to encourage conversation. Kynoch said she aims to redo the board this year with new testimonies in order to continue the dialogue
on campus.

Other initiatives on campus are also hoping to help achieve that atmosphere of open conversation. Take Back the Night, a big event held at Elon in the fall semester allows students to share what they have been through in order to generate the conversation in a safe space. Sex in the Dark was another event this semester that focused on asking questions and talking through concerns and general questions around sexual activity.

Kynoch said she feels “there is definitely a presence of the #MeToo movement on campus, and as a very progressive school, Elon is in a good place” in terms of generating this conversation.

Kynoch said she saw evidence of a real positive improvement at this year’s New Student Convocation.

“For Connie Book to state that there will be no sexual assault tolerated on campus was really powerful,” Kynoch said.

Kynoch said she did not see this level of openness around the topic of sexual assault during her three previous years at Elon.

Senior Mollie Richter, a co-meeting chair for Elon Feminists for Equality, Change and Transformation (EFFECT), said she also feels that the #MeToo board is generating an important conversation.

Within the conversations EFFECT has as an organization, Richter has seen people become a lot more comfortable talking about the topic and their own experiences.

Throughout her time at Elon, Richter has “personally seen people become much less afraid to voice their opinions about the way Elon handles things and how they themselves have experienced sexual
assault.”

Richter said the #MeToo board has been really essential to this progression. “In the past, even though [the movement] was present, people still felt uncomfortable and felt it was taboo,” Richter said. “Now, people are becoming much more open, and Elon is definitely creating positive approaches to talking about it more.”

Through EFFECT, Richter has been involved in a huge campaign about safe sex and consent and also partnered with “Take Back the Night” to facilitate change.

“Consensual sex is a prominent topic that we discuss, and whenever there is stuff on the news, we like to talk about it in a safe environment.”

Richter said there is still improvement that needs to happen, but “there is definitely an increase in the willingness to be vocal.”

According to Richter, during EFFECT meetings, people have discussed the boundaries and lines around consensual sex, and throughout the semester, they have spoken about Brett Kavanaugh’s appointment as a significant event in regard to this discussion.

“We designate at least one meeting a semester to having a conversation about this while making sure to approach it sensitively,” Richter said.

Both Richter and Kynoch said they feel that continuing to increase advertisements around events and experiences on campus is the main way in which these experiences will become more recognized and hopefully there will be change in those who are affected by sexual assault on Elon’s campus.

The board includes a number of resources to contact if people feel threatened or unsafe in an environment. This list includes both on- and off-campus phone numbers as well as details for the local Sexual Assault Response and Resource Center in Burlington.

It hopes to ultimately create a safe space on Elon’s campus for the #MeToo movement and the discussions around it
to be had.