Turnovers prove costly for Phoenix as offense stalls after halftime. 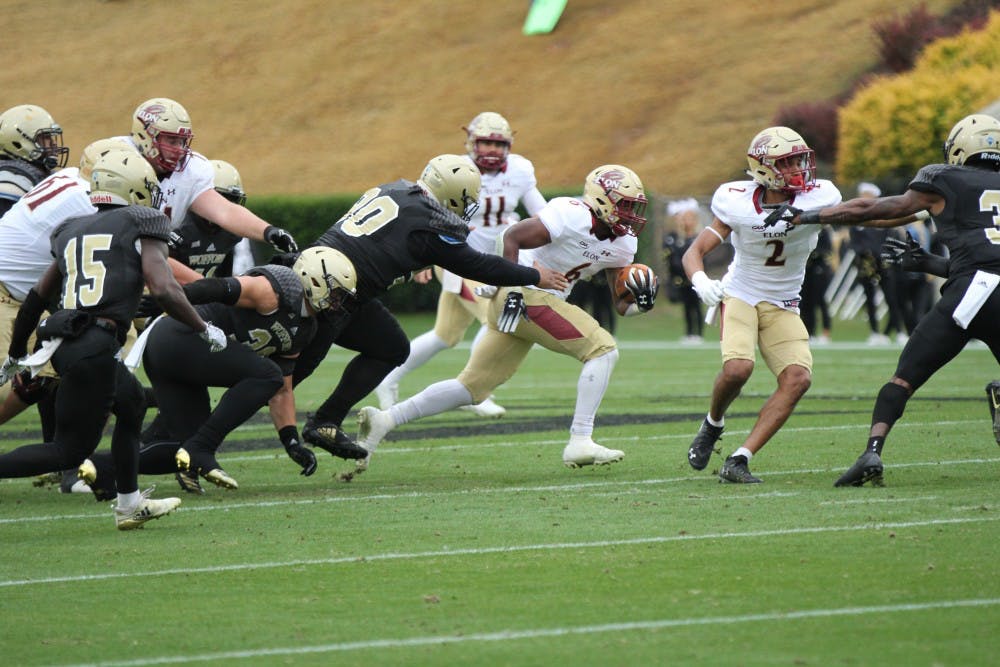 
Freshman Jaylan Thomas rushes behind a lead block from receiver Kortez Weeks against the Wofford College Terriers in the first round of the playoffs.

SPARTANBURG, S.C. —  Turnovers proved costly for the Elon University football team as the Phoenix lost 19-7 to the Wofford College Terriers at Gibbs Stadium in the first round of the Football Championship Subdivision playoffs.

Though Elon's defense played well, forcing the Terriers to settle four field goals in prime field position, mistakes  on offense moved Elon’s playoff record to 0-2 in as many seasons in Curt Cignetti's tenure as head coach for the Phoenix.

A fumble off a botched handoff between quarterback Daniel Thompson and running back Brelynd Cyphers, along with Thompson's interception in the third quarter, stopped Elon from progressing downfield, giving the Terriers extra possessions.

“First of all, I just want to give hats off to the defense. They gave us a chance even when we played poorly,” Thompson said. "Offensively, we moved the ball, you just can't have those turnovers.  We had chances and had opportunities, but didn't capitalize.   Wofford did their job in and held the ball.”

Eight different Terriers ran the ball in their pitch-option-heavy scheme, and Wofford dominated the time of possession by 10 more minutes than the Phoenix. Wofford rushed for 344 yards compared to Elon’s 260 yards of total offense. Elon averaged 214.4 rushing yards per game this season, but on Saturday, the Phoenix only ran for 51— its lowest total of the year.

“Those two turnovers in the third quarter are killers. It hurts you. And we didn't run the ball very well,” Cignetti said. "But that’s a credit to Wofford, we left plays in the pass game out on the field and they deserved to win."

At halftime, Elon lead 7-6 thanks to a Cyphers one-yard run in the second quarter, but those turnovers halted the Phoenix’s momentum on the other side of the break.

Wofford’s Luke Carter converted four of five field goal attempts, and running back Nathan Walker’s four-yard touchdown was the only touchdown for Wofford. Now in his second season as head coach, Cignetti is 2-6 during the month of November. It was a trend Cignetti wanted to break, especially after the success his team saw earlier in the season.

Injuries to starting quarterback Davis Cheek and running back Malcolm Summers headlined a host of key Elon starters who were hurt near the end of the season. Elon, which upset national powerhouse James Madison University in October and started the season 4-1, ended 2018 on a 2-3 skid in key games to Colonial Athletic Association rivals.

But Cignetti, whose arrival last year spearheaded Elon to two winning seasons, said he is proud of the effort his team showed in the end, despite the challenging circumstances.

“I don't think you can minimize the accomplishments that our seniors have made in the last two years in turning this program around and getting a jump started,” Cignetti said. “The injury bug hit us. It's not an excuse, but it's a fact.

“We came down here confident believing we could win We really wanted to win our first playoff game. So I’m  disappointed because I thought the players really laid it out on the field, but Wofford deserved to win.”