Early energy fades fast, Phoenix humbled on their own turf 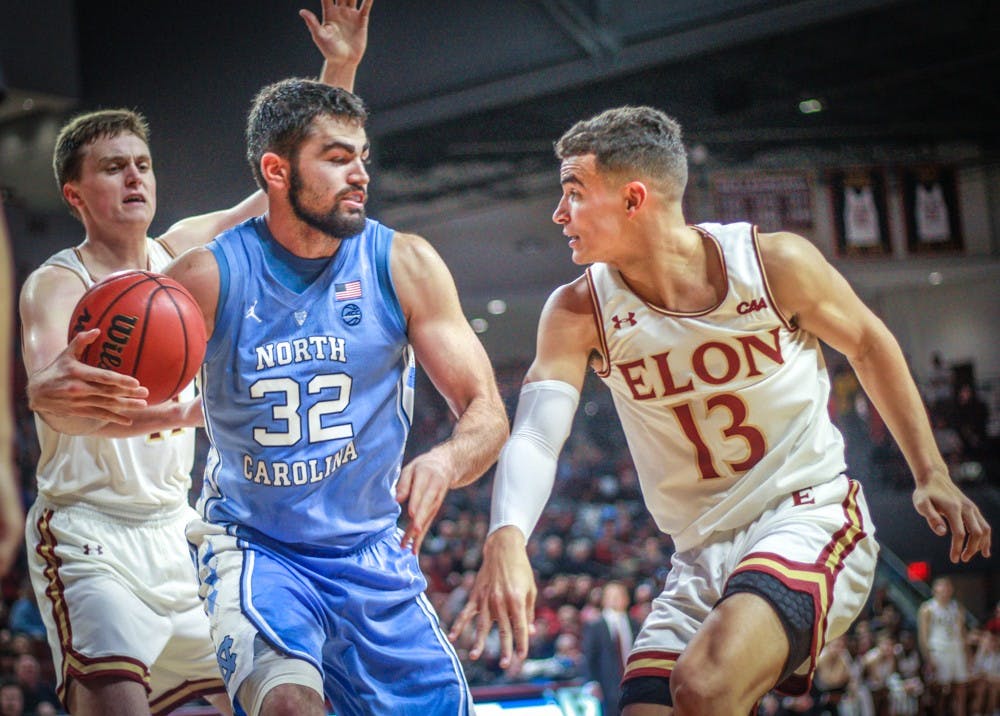 “Regardless of the outcoming this was a special night. This was an event that’s been talked about for a long, long time. … For Roy Williams and North Carolina to be willing to help us open up Schar Center for a men’s basketball game was really special,” said head coach Matt Matheny.

The student section of Schar Center was rocking. With maroon and gold as far as the eye could see, students held up cardboard cutouts, sang and danced their team to a raucous start.

“Alumni [Gym] was definitely a special place, but playing here is a totally different atmosphere. The support tonight was great. … it really was a lot of fun," said senior guard Steven Santa Ana.

UNC freshman forward Nassir Little led the entire game scoring with 21 points, while senior guard Sheldon Eberhardt lead the Phoenix with 16 of his own. UNC whipped the glass, nearly doubling the rebounding category 60-31.

Early on, the Phoenix seemed undeterred by the big stage, leading 10-9 at the first media timeout. Elon was getting rebounded badly, but made the most of their possessions, getting good looks and converting, shooting 4-5 on their first attempts of the game. But Elon would not lead the game after the 15:17 mark in the first half.

Careless turnovers hurt. Lost possession on back-to-back times up the court by Santa Ana and multiple travel calls were of no help to the Phoenix. Couple that with a huge rebound margin, and the Phoenix saw its lead evaporate. The sheer length of the Tar Heels gave them a 26-10 advantage on the glass, making this uphill battle all the more difficult for the Phoenix.

But Elon refused to go away over the first period of play. Using some key stops and big baskets by Santa Ana, Elon hung with the top-10 team. With seven and a half minutes to play in the first half, Elon found themselves in a dog-fight. They were not ready to roll over, even when the more athletic Tar Heels wanted to try and pull away with the game Elon came back with quick ball movement and open looks to stay within striking distance.

Using a 7-0 run in just a minute and a half, UNC opened up a 13-point lead with six minutes to play until the break. Try as they might Elon fell further and further behind, leading to a Tar Heels lead at the break.

“They’re a great ball club,” said senior forward Tyler Seibring. “We were just trying to play the way we play."

Things went from bad to worse for the Phoenix in the second half. Using 9-0 and 10-0 runs respectively, the Tar Heel lead ballooned to 31 points half way through the second period of play. UNC went sky-high, soaring through Schar Center without much resistance from the Phoenix. Up and down the court went the Carolina Blue and White, putting on a show with dunks and threes for their ever-louder growing fan section.

The mass exodus for students began around the seven-minute mark, leaving Schar Center to partake in other weekend-night activities. Only the die-hard fans with chests painted maroon and gold were left to vocalize their support. The opening of Schar Center ended much quieter than it began with North Carolina head coach Roy Williams walking off the court tying the most points he has ever scored as a head coach.

“They are a very good, competitive team and presented a great challenge for us and we’re going to use this going forward,” Seibring said.

The Phoenix will get six days to compose itself and get ready for Milligan College on Nov. 15. This will be Elon’s last home game before taking a cross-country flight and playing three consecutive games in California.