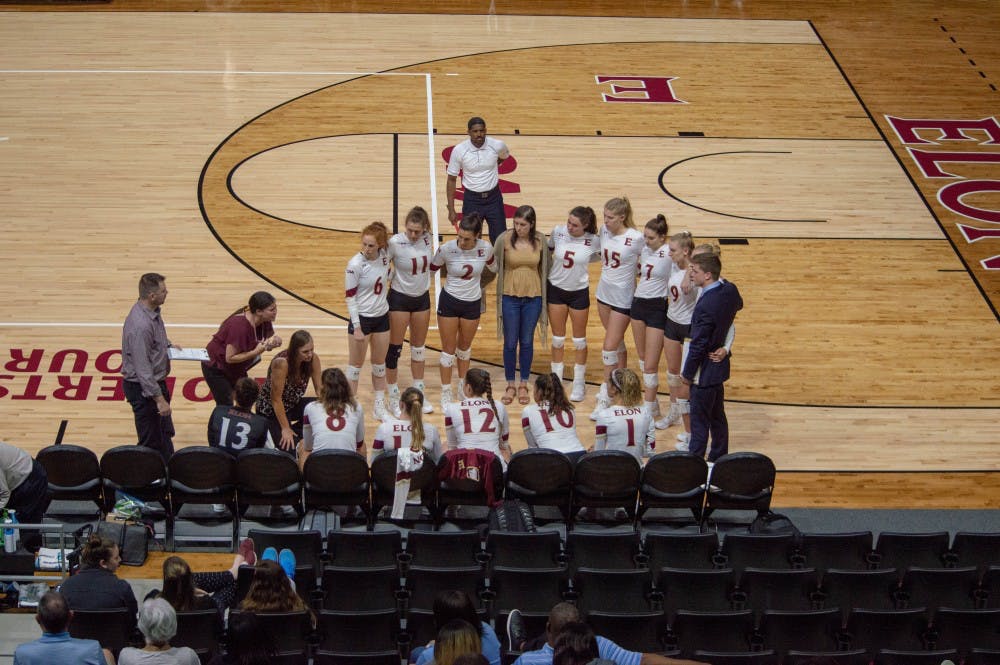 The Phoenix remains winless all-time against the Dukes, now sitting at a 0-10 career record. Senior outsider hitter Kam Terry said, “JMU is our biggest rival in the CAA, so we always come into the game really really excited, trying to get the win.”

At the start of the first set, the JMU defense was strong against dominant starting outside hitters, Terry and and freshman Kellyn Trowse, gaining most of its early points through defensive blocks. The frazzled Phoenix eventually found its groove, and kept most of the first set close even leading three times in the set.

“I think sometimes in games like this it can get really stressful, but what we try to do is always stay positive,” Terry said.

The Dukes ended up taking the first set 25-20, with Dukes senior outside hitter, Bryn Recker, and junior middle blocker, M’Kaela White, leading the drive with four kills each. Elon’s Terry also racked up four kills, but the team as a whole couldn’t find their momentum again once the Duke’s lead grew above three points.

The Phoenix came out strong in the second set, leading the Dukes 9-4 early on. The drive ended when JMU took the lead once more at 16-15, causing Elon to now call a timeout and regroup. The Phoenix took use of the timeout and played a strong, tight game, bringing the set to a 24-24 tie, Elon overall collecting 18 kills versus the Duke’s 11. The Phoenix took the second set 27-25, Terry being a key player with 10 of the team’s total 19 kills in the set.

The third set opened with emotions high, and players on both ends willing to give it all for a kill. The set once again was kept close, neither team willing to budge going into the fourth. Elon senior defensive specialist/setter Erin Kelly personified this emotion by sprinting after a ball that ended up nearly in the stands, but Kelly never gave up on the play, eventually barrel rolling to stop herself. JMU leaders could be heard telling their players to “get out of the set, just get out of it,” but Elon wasn’t ready to give them that satisfaction and either led the Dukes or kept them to a few points difference the whole set.

The Phoenix once again tied at 24-24, but this time JMU took the initial lead of 24-25. The Phoenix responded by tying it again 25-25, only for JMU to take the lead once more at 25-26. The back-and-forth play took place once more as Elon once again tied it 26-26, and the Schar Center was on the edge of its seat as the nail bitter continued. The Dukes ended up taking the set 29-31, and would make the fourth set a must-win for the Phoenix.

When asked about what the huddle was like going into the fourth set, head coach Mary Tendler said that they “just talked about, ‘Hey, that sets over. We have to move on and try to take them to 5.'” Terry said that they “did a lot of really good things in the third set” and was talking about “trying to carry that on” into the fourth.

The fourth set started as the others did; back-and-forth play, with Elon coming ahead and JMU tying it up. JMU eventually pulled ahead, bringing the score to 9-10. Tired players contributed to unnecessary errors, and coach Tendler was forced to call a timeout as JMU led 9-12. Frustration became evident as the Duke’s increased their lead to 9-15, a lead that then increased to 11-19, forcing Elon’s last timeout to be called by Tendler. The fourth set ended at 15-25, the largest lead at the end of a set the whole match, and Elon’s losing streak, unfortunately, grew to six.

“It's tough when you lose a close one and we had a lead that we gave up in the end," Tendler said. "Naturally it just feels like you’re deflated.”

Looking ahead, the Phoenix will travel to William and Mary on Oct. 14 to go at it with the Tribe (5-8).

Looking forward to these next games, Terry says, “We just need to stay confident, it’s been tough for this first part of the CAA and not coming out with as many wins, but just staying confident and knowing that we can take on these next teams is really important. ... Delaware is a totally different team, so hopefully we can create a different outcome.”