Members of the Elon community celebrate the 125th anniversary of the town after a delay. 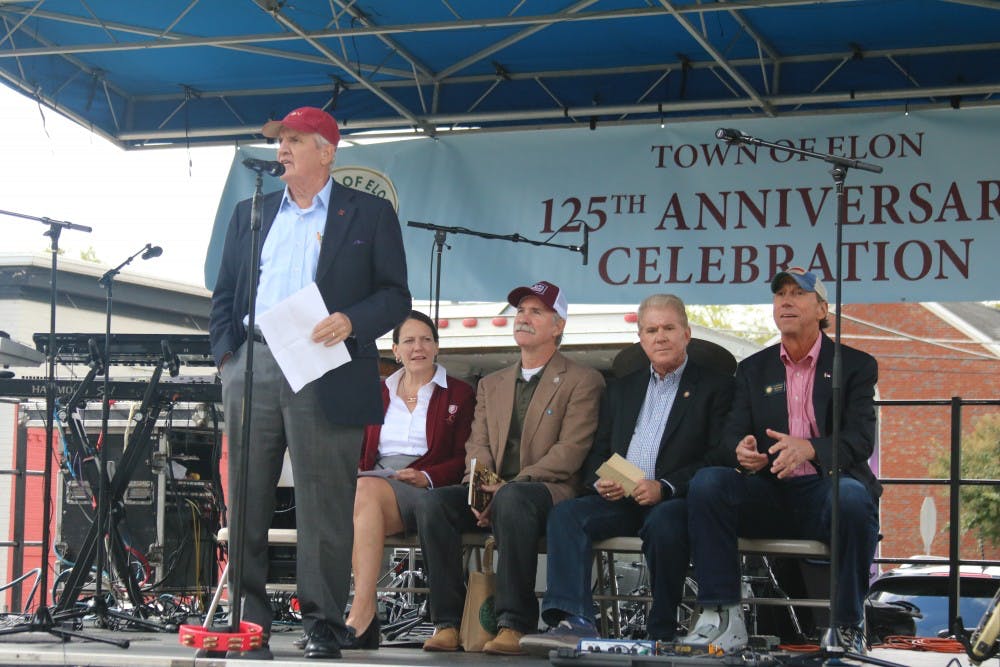 The town of Elon celebrates its 125th anniversary in downtown Elon on West College Avenue with the band “Hip Pocket.”

Updated at 12:37 a.m. on Oct. 31, 2018 to include additional information regarding the town of Elon's celebrations and the relationship between the town and the university.

The town of Elon and Elon university are “inseparable,” President Book said at the 125th celebration of the town.

The celebration, which was supposed to happen in April but was rained out, invited the community to a street festival including vendors, a hay maze, live music and speeches from prominent community leaders.

Since 1889, the town of Elon—a town named after its college—and Elon University have had to work together. Now, with President Book’s new strategic plan, “The Elon Commitment,” the town is following after with its plan, Envision Elon 2040.

State Sen. Rick Gunn, R–N.C., who is up for re-election, said that he believes the town and university have had great relations.

“What the university is doing is they are being extremely transparent,” Gunn said. “And they are getting a buy-in on a long-term vision. If it was not quite as open with the residents and with the university, I think it could be problematic.”

The town of Elon faces many unique struggles for a small town tucked away in the North Carolina Piedmont. The median age of the town of Elon is 21.9, and the population of the town is expected to double by 2040. Much of the land in Elon remains tax-exempt or unusable. According to the town, only six percent of the land is commercial and industrial.

The only available land that is being considering by the town for development is north of the campus and Rhodes Stadium. But at the 125th anniversary celebration, Rep. Dennis Riddell, R–N.C., Rep. Stephen Ross ’73, R–N.C., and Gunn said they were optimistic about the future
of the town.

Mayor Jerry Tolley said the town is “recognized nationally and locally and statewide as one of the safest towns in North Carolina.” Few crimes are reported in the town of Elon, according to data from the Elon Police Department.

Gunn said he believes the success of the town and university go hand-in-hand. He described it as a “balancing act.”

“Whether it’s by design or whether it’s by necessity, I think everybody has realized that while they are two separate entities, when it comes to the growth and development and quality of life, they truly have to treat themselves as one,” Gunn said.

The town of Elon has recently rebranded and plans to create new signs for downtown Elon around the block of West Lebanon Avenue, Manning Way, North Williamson Avenue and West Haggard Avenue. The town’s Downtown Development Committee hopes to revitalize the downtown and attract business with ambitious plans to improve parking, sidewalks and intersections in the 5 square miles that comprises Elon.

The total budget of the Downtown Development Committee is around $200,000. The town hopes to rely on the heart of the town — Elon University — to achieve its goals.

In Elon’s Downtown Master Plan, it is written that “It is important to remember that downtown revitalization is a ‘journey’ — it is not an event — it is not a project — it will take time, and the ongoing commitment of Elon’s government, business University and community leaders.”

After 12 weeks of town tours, eight weeks of plan developments and eight weeks of strategizing, the town has pushed its final plan, Envision Elon 2040, as a “future comprehensive land use plan.” Through its new goals, town officials want Elon to keep its “small-town feel” by implementing strategies to sustain its history and attract local businesses
and families.

Because of population growth throughout the entire state, the North Carolina Department of Transportation anticipates a high demand for passenger and freight trains in the coming years. The town of Elon predicts there will be a need to add additional tracks in the future to Lebanon Avenue and Trollinger Street.

Many residents of the town consider the railroad quintessential to its history. The town and college were born from a railroad depot named “Mill Point” back in 1889, according to Don Bolden’s book “Elon,” in his Images of America series.

“William S. Long, when he stood in that grove of oak trees, he said, ‘In the middle of this place, we are going to build a college for the world’,” Book said in
her speech.

And as the 125-year town charter was presented to Mayor Tolley in downtown Elon, a train puffed away in the distance as a reminder of Elon’s legacy.

A draft of the Elon Vision 2040 Future Comprehensive Land Use Plan will be presented to the public at the Elon Municipal Building by Nealon Planning LLC on Nov. 6, 2018. For more information, go to the Town of Elon’s Facebook page.