Power at Elon has been restored

Power is back across campus, and class will continue as planned on Monday 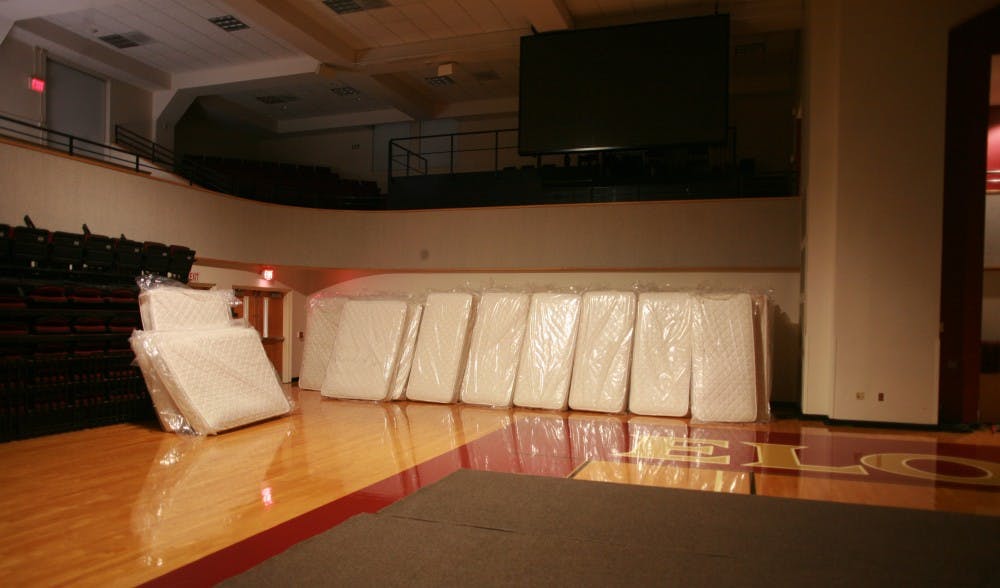 
Unopened mattresses lay at the side of Alumni Gym after Duke Energy was able to restore power on campus. Elon had originally planned to host students living in residences without power in the gym on Saturday, Oct. 13.

Power at Elon University has been fully restored throughout the entire campus.

The news was officially announced in an email sent at 7:35 p.m. from Jon Dooley, vice president for Student Life.

"Just before 7 p.m. today, Duke Energy crews restored power to the Station at Mill Point, South Campus and other neighborhoods and apartments that have been without service since Thursday’s storm," Dooley wrote.

His announcement canceled the university's plans to host students without power in Alumni Gym. The email stated that "student residents of Station at Mill Point and other campus housing who had been planning to spend the night at Alumni Gym may return to their apartments."

The exact cause of the power outage has not been confirmed. But there are suspicions that the downed power line on Briarcliff Road, that was restored Saturday afternoon, may have been the cause.

Plans to hold regular class on Monday were also confirmed in Dooley's email.

"Elon University will be open and operating on the normal schedule on Monday," Dooley wrote. "With power restored to the psychology/human services studies building, classes will be held in their regular locations."

Dooley's email followed the school's tweet announcing the return of power at 4 p.m.

Good news to report as power has come back on at The Station at Mill Point and we are getting word that electricity has been restored to other areas of the neighborhoods south of campus.

After two days without power, the news comes as a relief for many of the students staying at Mill Point.

While he is relieved he'll be able to spend the night in his own bed, Stiller wishes he had known more about the storm beforehand.

"I didn't realize the severity of the actual storm before it was on us," Stiller said. "I wish there were some emails beforehand."

Power may be back at Mill Point and main campus, but for those returning to off-campus residences, power cannot be guaranteed. In his final email, Dooley advised students in this situation to contact the Student Life administrator on call via Campus Safety and Police at 336-278-5555.

Elon News Network reached out to Director of Residence Life MarQuita Barker and Vice President for Student Life Jon Dooley. Neither were available for comment.