David downs Goliath as Elon takes control of its own destiny 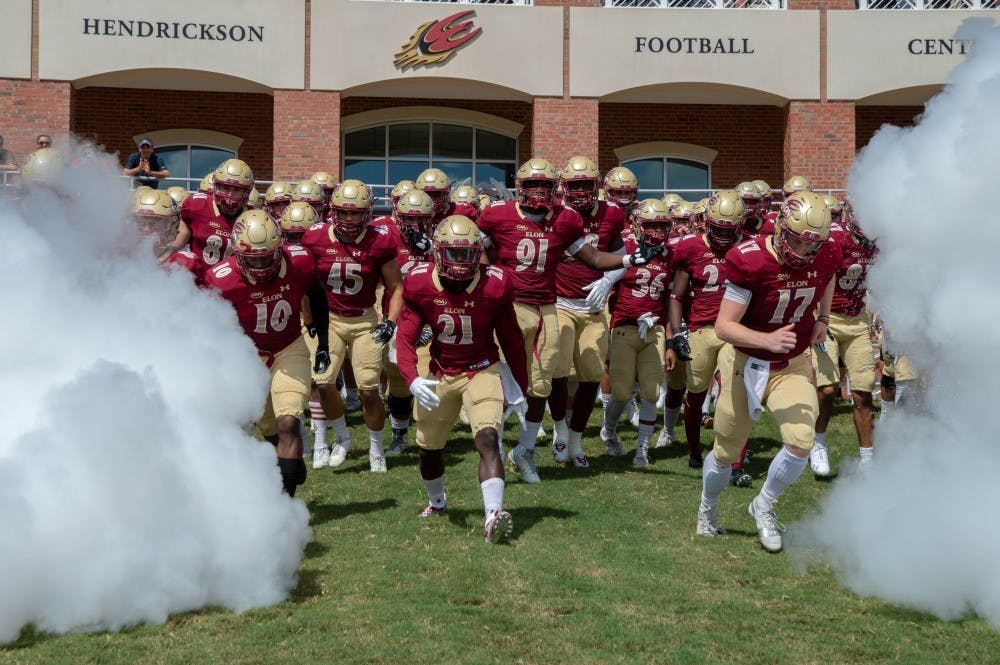 The game felt like a changing of the guard in the CAA as the Phoenix traded even blows with the conference’s top dog, erasing the memory of the 31-3 loss they suffered to the Dukes last year.

The Phoenix defense held the high-powered JMU offense to two touchdowns and 419 yards while the offense pitched a strong performance. The game concluded with an up-tempo fourth-quarter touchdown drive captained by sophomore quarterback Davis Cheek and a game-sealing interception in the dying seconds of the game to cap off the program's most important win in Division I history.

The Phoenix defense took the field to start the game and forced the Dukes offense to punt after a short six-play dive. The next Elon possession, senior running back Malcolm Summers took an inside hand off the right side, patiently following his towering offensive line. Summers then bounced the play to the outside and raced up the sidelines for a 30-yard sprint.

Summers, the workhorse of the Elon attack, ran roughshod over the Dukes' defensive front for 186 yards and a touchdown. This dominant performance puts Summers well over 2,000 career rushing yards, extending his career total to 2,179 yards.

With six minutes left in the first quarter, the Phoenix dismantled a threatening Dukes drive with a huge sack on 4th-and-2 courtesy of senior linebacker Warren Messer. Davis Cheek and the offense took the field the next play and uncorked a 41-yard bomb to put the Phoenix in Dukes territory. But the huge chunk play would not give the Phoenix the first lead of the game as the promising drive ended on a missed 44-yard field goal attempt by freshman kicker Skyler Davis that rang off of the right upright.

Midway through the second quarter, JMU’s dual-threat junior quarterback Ben DiNucci put together a surgical drive, extending plays with his feet and finding open targets down the field. But the Elon defense did not break, and on 3rd-and-10 in the Phoenix red zone, Messer flew through a gap in the offensive line and threw down DiNucci for yet another drive-ending sack. The Dukes were forced to settle for another three points.

While the defense was playing phenomenally, the offense was struggling with the Dukes defense. At this point, Cheek was two for seven for a measly 40 yards. This all changed on the ensuing drive when Cheek launched a 51-yard rocket to senior wide receiver Corey Joyner. The Phoenix rushed up to the line of scrimmage, Cheek faked a handoff to junior running back De’Sean McNair and dumped a ball over the middle to junior tight end Matt Foster for another 23 yards. Then it was McNair who dove into the end zone for a one-yard touchdown, bringing the score to 7-9 in favor of the Dukes.

Head coach Curt Cignetti reached in his bag of tricks, calling for an onside kick instead of kicking it deep to the JMU offense. While the ball was successfully recovered by Davis, the dive would result in a punt for the Phoenix.

A possession later, the ball was once again with the Phoenix, who opted to run out the clock, ending the half still trailing the Dukes by two points.

Throughout the first half, the Phoenix showed why they had the second best rushing defense in the CAA by holding the Dukes to only 60 rushing yards in the first half and holding the top-ranked CAA offense to just field goals in one half of play. This was the first time the Dukes hadn’t scored a first-half touchdown since last year's FCS Championship game.

The second half started with a Phoenix possession comprised of a steady passing attack. Cheek worked for the team down the field with a collection of long passes driving the maroon and gold deep into JMU territory. But the drive stalled out with multiple penalties on the Phoenix in the red zone, forcing the team to settle for three. With the successful field goal from Davis, the Phoenix took a 10-7 lead over the Dukes, Elon's first lead of the game.

A controversial call came late in the third quarter. On third down with their backs to their own end zone, the Phoenix brought an imposing blitz at JMU and got to DiNucci, who spun out of the pressure and ran away from the defense for a crucial first down. But upon further review, the officials called it a sack on the basis that DiNucci’s knee hit the ground while he was spinning away. This would result in an Elon scoring drive that ended in a field goal and a 13-12 lead for the Phoenix with less than 13 minutes to go.

When the ball came back to the Phoenix, the offense was poised to extend their advantage over the Dukes. On the second play of the drive, Cheeks handed the ball off to Summers, who took two strides to the left and then planted his foot in the ground to run right. This misdirection left the running back with nothing but green grass in front of him as he ran 59 yards to give Elon a 20-12 lead, stunning the Family Weekend crowd at Bridgeforth Stadium.

With their backs against the wall and their home crowd becoming restless, the Dukes fought to regain their lost lead. DiNucci took the reigns of the offense, leading a 55-yard scoring drive made possible by a 47-yard completion to his leading receiver Riley Stapleton. With the Dukes still trailing 20-18, the coaching staff opted for a two-point conversion to attempt to tie that game at 20 points apiece. DiNucci took the snap and shoveled it to a cutting running back, who turned upfield with the end zone close in sight. Then, seemingly from out of nowhere, senior defensive back Tyler Campbell launched himself at the running back, pulling him down inches from the goal line and preserving the Phoenix lead.

DiNucci and the Dukes offense did not stop there. After a quick three-and-out by the Elon offense, DiNucci capped off another 55-yard drive with a touchdown pass to Stapleton. The Dukes attempted another two-point conversion, but once again it was stopped cold by the Elon defense. With the scoreboard reading 24-20, for the first time in the fourth quarter, it was the Phoenix that had to come back in order to complete this dream upset.

The Dukes got possession right back and drove down the field, hoping to put the Phoenix away for good. But the promising game-clinching drive ended as JMU receiver Dylan Stapleton had the ball stripped from his hands by redshirt-freshman defensive back Jarquez Bizzell and recovered by Elon’s human turnover machine, junior defensive back Greg Liggs Jr.

With just over four minutes remaining in the game, Cheek and the offense took to the field. With confidence riding high, the offense moved down the field, seamlessly mixing rushing attacks with aerial assaults.

But every great comeback requires a little bit of luck, and with the ball on the JMU 29-yard line, that's exactly what happened.

Cheek stood in the shotgun with Joyner to his left. Joyner ran a crossing route across the middle of the field that was thrown behind him. The ball tipped off his hands and a few yards downfield until McNair ran underneath it and let the ball fall into his outstretched hands as he fell forward for an improbable first-down reception.

Cheek wasted no time admiring the miracle play as he hurried to the line, took the snap and fired a strike to freshman wide receiver Avery Jones in the back of the end zone. The electric Elon bench and fans were the only noises you could hear in the otherwise silent stadium. After a successful extra point from Davis, the Phoenix held a field goal lead over JMU with 1:12 remaining.

DiNucci tried to work the Dukes down the field to force overtime or better, but his scrambling style was deemed ineffective by senior linebacker Matt Baker. The ultimate upset was completed when DiNucci’s pass downfield was picked off by senior defensive back Connor Christiansen. Two plays later, Cheek took a knee, shocking the CAA by defeating the undefeated Dukes, the team that had won the CAA championship three years in a row.

The Phoenix look to remain undefeated in conference play when they take on the Delaware Blue Hens Oct. 13 in Newark, Delaware.