In reaction to power outages across campus, Elon has opened Moseley as a refuge for students 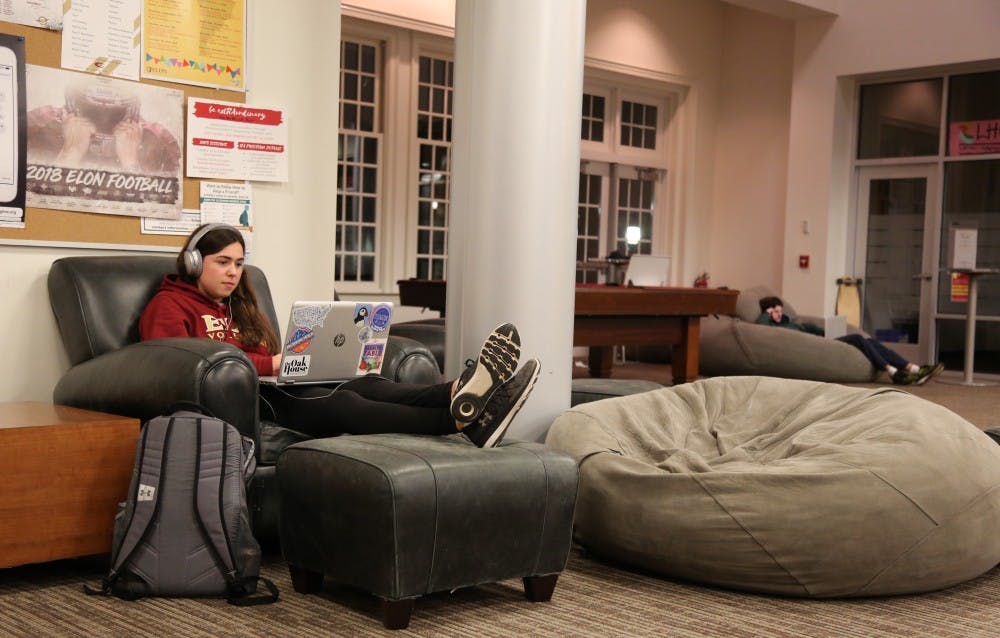 
Senior Alexa Pavlick watches "Black Panther" on her computer in the Moseley Center, where she is charging her devices before returning to her powerless Mill Point apartment on Friday, Oct. 12.

The Moseley Center has been opened as a refuge for students staying on campus in residences without power.

The building was turned into a student shelter after an email from Jon Dooley, vice president for Student Life, announced the continued power outage in the Station at Mill Point and across South Campus. According to recent estimates from the Mill Point staff, there are roughly 55 students currently staying in the powerless residential area.

Several residents of Mill Point have taken up Elon's offer to spend the night in Moseley, including Kenneth Brown Jr., student body president.

Brown has been without power since Thursday afternoon. With the help of Campus Safety and Police, Brown was able to get into his apartment and pack an overnight bag. Friday was his second night in Moseley.

"On Thursday, my friend and I were planning to get dinner and go home, but the hurricane canceled those plans," Brown said. "So instead we went to the African American Resource Room, got some popcorn, watched 'Sing,' and fell asleep on the couches."

On Friday night the African American Resource Room was taken, so Brown set himself up on the ground of his SGA office on the second floor of Moseley. He slept on a French fry floatie that he won during Trivia Night at Lakeside last spring.

His pillow, blanket and Goldfish snacks were provided by the Moseley Front Desk. More than 30 pillows and 50 blankets are available for students spending the night in Moseley, but not all students affected by the storm opted to stay there.

Senior Alexa Pavlick is using Moseley to charge her devices before returning to Mill Point for the night.

"I don't want to go back until I know I'll be able to fall asleep because I can't really do much there without power," Pavlick said. "But being able to relax in Moseley has been nice."

Staying with Pavlick and Brown for the duration of Friday night are two professional staff: Jana Lynn Patterson, associate vice president for Student Life and dean of Student Health and Wellness, and MarQuita Barker, director of Residence Life.

"Any time we have a wide spread power outage, Moseley is our main center," Patterson said. "Moseley is actually on a generator. So, in the event other parts of campus went down we would be able to shelter folks here."

And as long Moseley is being used as a student shelter, two professional staff and Moseley Front Desk attendants will be present.

For Patterson, the most memorable time Moseley was turned into a student shelter was during an ice storm in 2014. According to Patterson, during that storm there were more than 150 students who spent the night in Moseley — a stark difference from the roughly 10 students Patterson is expecting to stay Friday night.

Despite the low numbers, Patterson is glad the university is providing this service.

"As long as we got a residential area where folks can't access power, then we will keep the shelter open," Patterson said. "We care about our students and we care about their welfare."

While students may be safe in their residence halls around campus or in Moseley, Brown is taking his night on a floatie as a lesson in humility.

"Not everyone has a floatie to go to, not everyone has a comfy student center to go to. There are probably thousands of people who don't know where they are going to be sleeping tonight," Brown said. "We always got to remember that things could be worse."

After turning off the lights to his office and finding the comfiest part of the floatie to sleep on, Brown says he will be taking a few moments to count his blessings.