Board of Trustees to support Book, hold her accountable during presidency 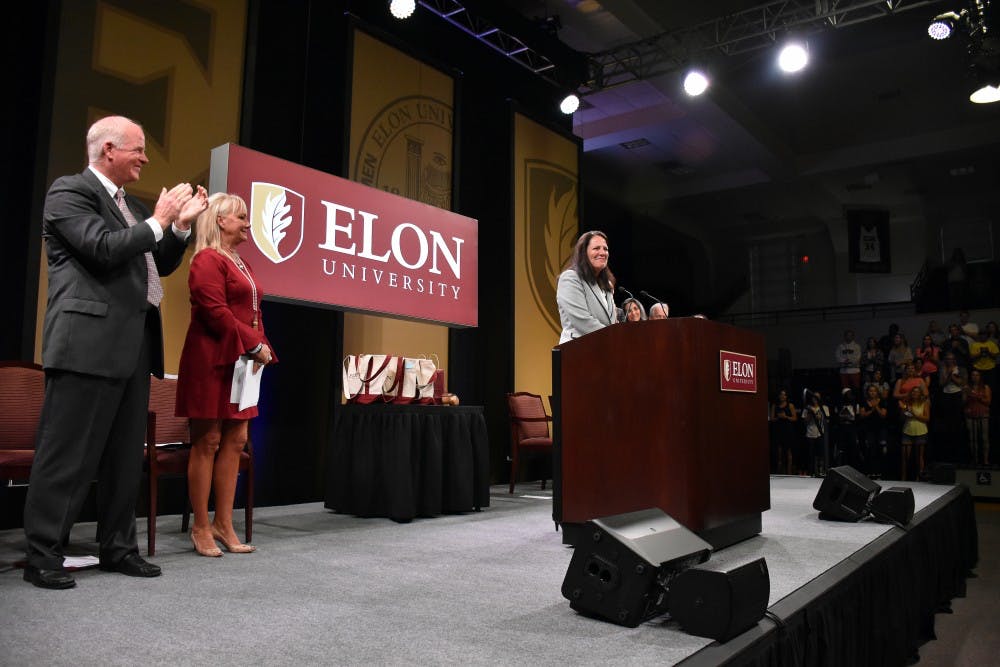 Photo by Caroline Brehman | Elon News Network
Trustees Wes Ellingburg, chair of the presidential search committee, and Kerrii Anderson, chair of the Board of Trustees, applaud President Book as she prepares to speak to campus Oct. 9, 2017

Elon University President Emeritus Leo Lambert didn't want to attend his last board of trustees meeting alone. Sure, he had presented to the board numerous times in his nearly 20 years as president. But he wanted a special guest to come to his final one.

And that special guest was his successor.

In her more than two decades in higher education, Connie Book climbed every administrative rank, from an assistant professor to eventually a provost. But she had never been a university president before, so she wanted to shadow Lambert in this different setting.

She knew that in a few short months, she’d be meeting with the board as Elon’s official president. The excuse of being unprepared because of the transfer of power would have been a valid one. But the board wanted to continue operating at a high level.

And it worked, because people at the table for her first meeting said Book was ready.

“She was very focused on driving the agenda and not slowing any of the progress,” said Kerrii Anderson ’79, the former chair of the board. "We did not want everything to be on hold as we transitioned to our new president. We wanted to put our foot on the gas and keep driving.”

In higher education, the president or chancellor of a university is normally labeled as the overarching leader of the institution. And while it’s true they hold a lot of power, most of them normally report to an overarching body known as the board of trustees.

At Elon, that board consists of 41 people whose primary duties are to advise the president and guide the school in a strategic direction, both financially and policy related. Most trustees are alumni and are leaders in their professional careers.

The board also selects the president — eight members of the board were on Elon’s most recent presidential search committee — and that committee ultimately recommends a candidate to the entire board before it makes the final decision.

As Book is inaugurated Oct. 18, members of the board said they are proud to pause and reflect on the historic moment. But Book’s arrival comes at a time of great development for Elon. Once the ceremonies end, there’s still work to be done. But they know she’s up for the task.

“One of the nice things about coming into a school that's doing well in terms of a number of different aspects and following in the footsteps of somebody like President Lambert is that you allow the next CEO to come in and go about getting up to speed the right way without having to come into a crisis-type situation,” said Ed Moriarty, co-chair of the inauguration planning committee and a member of the board. “The fact that the school is in as good a shape as it is and following Dr. Lambert's footsteps allows President Book to come in at an appropriate time.”

Ed Doherty, current chair of the board of trustees, said he and Book talk almost on a weekly basis. The chair holds a more significant responsibility than a regular member. As the leader, he plays a key role in ensuring the board’s goals are moving forward at all times.

The board meets two to three times a year, and occasionally, they participate in a retreat off-campus (in 2017, Lambert announced he’d be stepping down as president during the board’s retreat in Florida). Within the board, sub committees, such as the Audit Committee and the Governance and Nominating Committee, focus on a specific aspect of the university. Anderson says there are many moving parts that involve constant communication between the president and the chair.

“That doesn't mean just, you know, write me an email or me a text,” Anderson said. “It means pick up the phone and call if you just want to bounce an idea off me. I think as in a leadership position, you want to always have all the answers, but what a board of trustees brings for the president is to be able to pick up the phone, say ‘I'm thinking about this and about the couple of other alternatives. What's your reaction? There's a leadership committee at the board level that can provide a lot of counseling input.”

Anderson said Book knows crafting the strategic plan is her main responsibility early in her presidency, and the board is there to help guide that process as much as needed. Doherty said his colleagues have been pleased with Book, especially with her visibility among students and her genuine interest to learn the role. Moriarty said he hopes she continues this trend even as she gets more comfortable in her role.

“Since March 1, she has done a terrific job getting grounded at the school,” Moriarty said. “I think she's been very  available to people has certainly spoken with lots of groups, have been very open towards lots of feedback. That’s such a great trait to have for someone who is going to lead the school.”