'Her Time': Connie Book relies on history to plan for the future

With her inauguration approaching Oct. 18, Book continues to adjust to presidency by learning a new set of skills. 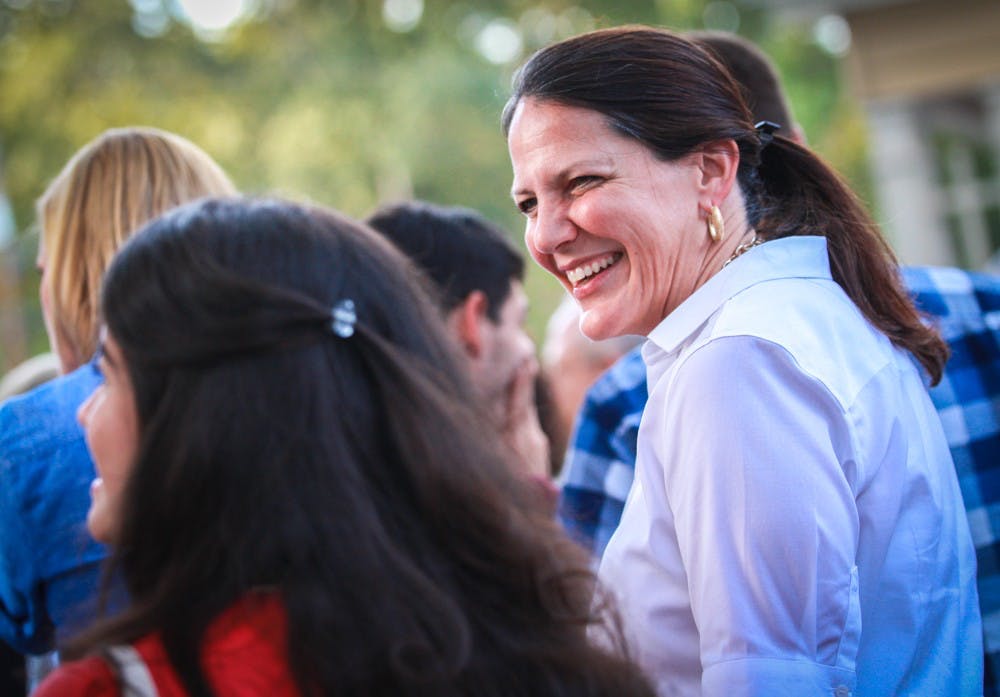 Connie Book enjoys a moment with a student at Elon University. Photo by Abby Gibbs.

Elon University President Connie Book has mentored numerous students in her career. But even as she'll shatter the glass ceiling as the first woman who’ll be inaugurated as an Elon president on Oct. 18, she isn't afraid to be mentored, as well.

In 2015 before Book left Elon to become provost at The Citadel, she and Vice President Emerita Jo Watts Williams ’55 had a lasting conversation. Some of Williams’ brothers attended The Citadel, so she knew the military school’s rigorous traditions. She wanted to give Book some uplifting advice before leaving.

“She stopped me on the sidewalk and said, ‘Now, Connie, you know that you’re going to have some challenges,’” Book said. “She was so good at reminding me that whatever got me that position was going to serve me well when I got there and not to lose sight of it.”

Now with her presidency in its infancy, Book’s sights are set on the future as new initiatives and tasks claw for her attention.

Williams has had a close eye on presidents for more than 50 years. She’s worked for five different Elon presidents, ranging from a student worker to eventually vice president for development.

Though Book is new to the role, Williams has full faith in her. And she, along with other Elon colleagues, are ready to help Book add new tricks in her pitch count.

“The beautiful thing is each of the presidents was really just right for his or her time,” Williams said. “Dr. Book was just the perfect selection to take us into a whole new era.”

The art of the deal

One night this September, Book showed off her new pitch in a fitting place.

She and University Advancement staffers traveled to Washington, D.C., for an “Evening for Elon.” As an effort for alumni expansion, Evening for Elons are fundraising events were the president updates alumni, parents and donors on the university in cities across the country.

Instead of a convention center or a hotel, Elon rented the entire Washington Nationals baseball ballpark. As she stood in an MLB stadium preaching the school’s mission, it reminded her of the scope of her job.

Last week a @RedSox jersey in Boston, this week an event at @Nationals Park in Washington. Do I sense an Evening for Elon theme? Our night in DC was a home run! pic.twitter.com/2x1Cs2D5jl

“The platform where I’m talking is on top of the dugout,” Book said. “And I’m standing, looking up into the stands at the alumni and I’m like, ‘Who would think that my career would bring me to this opportunity?’”

Fundraising is something Book admits she hasn’t had much practice in. But it’s imperative for her role. On the morning of her presidential announcement Oct. 9, 2017, she met with Jim Piatt, vice president for university advancement. There, she individually called donors and alumni to introduce herself and say thank you. That showed Piatt she was ready to work.

“That was a real meaningful moment for those individuals to hear from the new president on her very first day,” Piatt said.

Since March, she’s traveled to Charlotte, Atlanta and Boston, and will be in New York City in two weeks. Previously, as a provost, Book dealt mostly with the faculty and internal affairs.

But as president, she needed to change her focus. And Piatt says it’s all about authenticity and developing relationships.

“The president is really the most important person when it comes to fundraising because the president sets the tone for the mission and the vision of the institution,” Piatt said. “Here at Elon, we make a big deal out of strategic planning, and the president tends to be the main voice about what our strategy as long term."

In 2020, Elon will launch its new strategic plan. A main goal, which was completed in its last plan was tripling its endowment from $80 million to more than $200 million. An endowment is a sum of money universities reserve for special allocations. Sixty-one percent of the Elon’s endowment is reserved for scholarships.

Book wants to endow more scholarships to attract a more diverse student body. And according to Elon’s 2018-2019 institutional priorities, $20 million of an upcoming fundraising campaign will be set aside solely for scholarships. President Emeritus Leo Lambert told Elon News Network he spent about 40 percent of his time fundraising, and said Book will probably spend more time than him doing so. Book said her priority when fundraising is to be authentic and share her excitement about the future.

“One of the things I really try to do when I’m in the field talking to people about Elon, is to share the enthusiasm of an Elon education and the excitement about young people in this learning environment that we’ve designed,” Book said. “I really focus on celebrating our students-centered decision making here, and it resonates with our alumni, with parents and other friends of the university.”

As vice president for development, annual giving spiked 92 percent under Williams' watch from 1979 to 1995. She fully believes Book will adjust to this role because she trusts her judgment. And she knows she’ll adapt, because “that’s what great leaders do.”

Before Book’s first day in office, the two women had another conversation. With Book returning, Williams asked Book about her experience at The Citadel. The answer impressed her.

“She said something to me that I appreciated so much — that one thing that she had learned was the difference in command and leadership,” Williams said. “Dr. Book has the leadership ability that we need to continue this phenomenal progress at Elon.”

Prior to The Citadel, Book climbed Elon’s administrative ranks for 17 years, eventually becoming an associate provost. She lead the creation of numerous programs, including the Student Professional Development Center and Elon in Los Angeles. But while sorting through those initiatives, she met regularly with Steven House, provost and executive vice president, seeking advice and guidance around a circular wooden table in his office.

“We sat around this table right here and I’ve given her performance appraisals and told her about how leading means,” House said. “People will follow you if you’re willing to get dirty and do the tough work with people, so she has all of those skills and can come up with those ideas.”

Those ideas came from preparation. Every morning, Book tries to take 40 minutes to read The New York Times, The Wall Street Journal, The Chronicle of Higher Education and Inside Higher Ed. That reading and her innovative drive led to the creation of study abroad programs and undergraduate research at The Citadel, among other initiatives. Book was ready to contribute immediately.

“She was so very well-read about current issues in higher education,” said Brigadier General Mark A. Bebensee, interim provost at The Citadel. “She’s very much aware of the kinds of issues that colleges and universities across the country are concerned about. It was great to have and her have expertise and interest in those kinds of barriers, as well.”

But sometimes, being president presents things you can’t prepare for.

On a September morning in 2001, Book remembers walking into the School of Communications and seeing the World Trade Center engulfed in flames on the television. A few hours later, the community gathered for College Coffee.

“You can imagine the distress,” Book said. “We had students whose parents were killed that day.”

It’s the unknown that keeps Book up at night. But she wants to be ready for them as possible, as every Elon president before her has been.

Williams said the five presidents she’s worked for each had a crowning milestone defining their legacy, whether it be through unpredicted circumstances or efficiently executing their agendas.

The average tenure for an Elon president is 15 years. Book and her staff are preparing for the future, but so much can happen between now and then. So, as Elon celebrates her inauguration, Book wants to focus on the now, and she welcomes any mentoring to guide her through it. And she still wants to learn new things.

“There are a lot of things I can’t control, but what I do have control over is making sure I spend time with you and get to know you,” Book said. “One of the purposes of this community is to know each other, to care for each other so that when all these uncertainties happened that we’re together.”