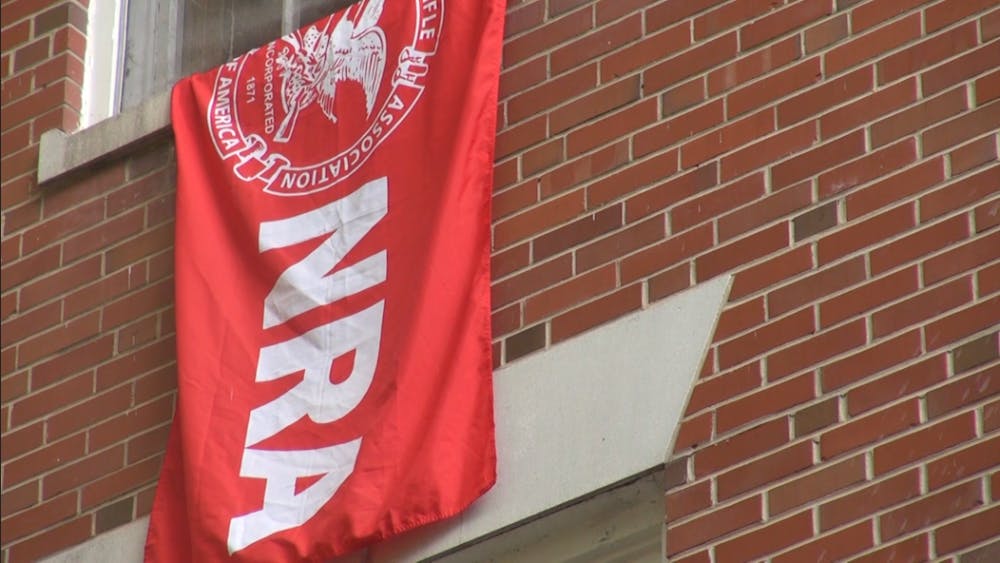 As the conversation surrounding gun rights and safety headlines conversations in the national political climate, this debate is also playing out on Elon’s campus, as the bright red National Rifle Association flag hanging outside Smith Hall was removed by Residence Life this week.

The flag sparked controversy among students when it first appeared last week, causing one freshman in Historic neighborhood to take action.In order to protect her identity and safety, Elon News Network is not identifying this student.

The student took a photo of the flag and showed it to her Resident Advisor, who she says told her would make sure it’s taken down as both a fire hazard and an offensive symbol on campus.

By the end of the week the flag was gone, and she says Smith residents knew who to blame. She says she got texts from her friends saying “be careful” and “watch out,” and that a group of Smith Hall residents were standing outside their dorm asking passers-by if they knew her.

She said she feels safe on campus, but knowing these men are looking for her makes her uncomfortable.

“In light of current events going on, the NRA is not something that should be present in a celebratory light,” she said. “They need to grow up and realize that what you do has effects on people.”

In an essay written on the website “The Conversation” about free speech on Elon’s campus, President Connie Book said that freedom of expression is “at the heart of a university’s existence.”

Simone Thompson, the community director for historic neighborhood, declined to comment. MarQuita Barker, director of Residence Life, said the flag was a fire hazard, and that these rules apply to everyone.

“It could have been the American flag, we still would have asked them to take it down,” she said.

However, Alva Sizemore, the Town of Elon’s fire department chief, says that depends on how the fire code is interpreted. While the flag could potentially pose a problem during a rescue, in his 40 years in fire service, he says he hasn’t had any problems with this.

“We’ve never had an issue with a flag outside a window before,” he said. “Typically we would have issues on the inside, like maybe they were hanging the flag inside, hanging it down from the ceiling.”

Jon Dooley, vice president for student life, said the issue with the flag wasn’t a fire hazard, but goes against Residence Life policy which states objects cannot be hung out of windows.

While some students were happy to see the flag removed, others disagreed.

“I was a little disappointed to see a student’s opinions suppressed,” said freshman Nick Campoli. “It would be nice if we lived in a world where everyone’s opinions could be heard.”

Freshman Lindsey Brenner said she believes free speech should be limited on a college campus.

“I think those opinions should probably be kept to yourself because gun and gun laws are a very serious matter,” she said. “Especially if you’re on campus with a bunch of people and you’re talking freely about possession of guns. That could worry a lot of people and make some suspicious.”

Catherine Mortensen, a spokesperson for the NRA, says that since the school shooting at Marjory Stoneman Douglas High School occurred in Parkland, Florida, these worries have resulted in many reports to the NRA of anti-gun speech and bullying of youth who support the right to bear arms. While she says Elon has the right as a private institution to restrict speech, she doesn’t agree with it.

“We think it’s outrageous that Elon University would be doing this, and it shows a clear anti gun bias,” she said. “Students need to know they can support the second amendment and not be harassed or intimidated.”

For Student Body President Kenneth Brown Jr., he is trying to find the middle ground as a campus leader. While he says he understands how controversial symbols such as the NRA flag can be deemed offensive, universities are the right place for these conversations to start.

“I think college is ground zero in terms of just starting different types of conversations and challenging people, and also getting to know them and figuring out why they believe what they believe,” he said. “Also for ourselves internally realizing who we are outside of where we’ve been.”

Brown said he hopes these conversations will promote understanding and empathy between students with conflicting opinions.

“To be able to acknowledge that yes, you can believe what you believe, you can do whatever you wanna do, but also understand how what you do may directly or indirectly affect a group of people,” he said. “I think college is where you learn that. It’s where you learn it’s more than just you.”

The student who originally hung the NRA flag could not be reached for comment.