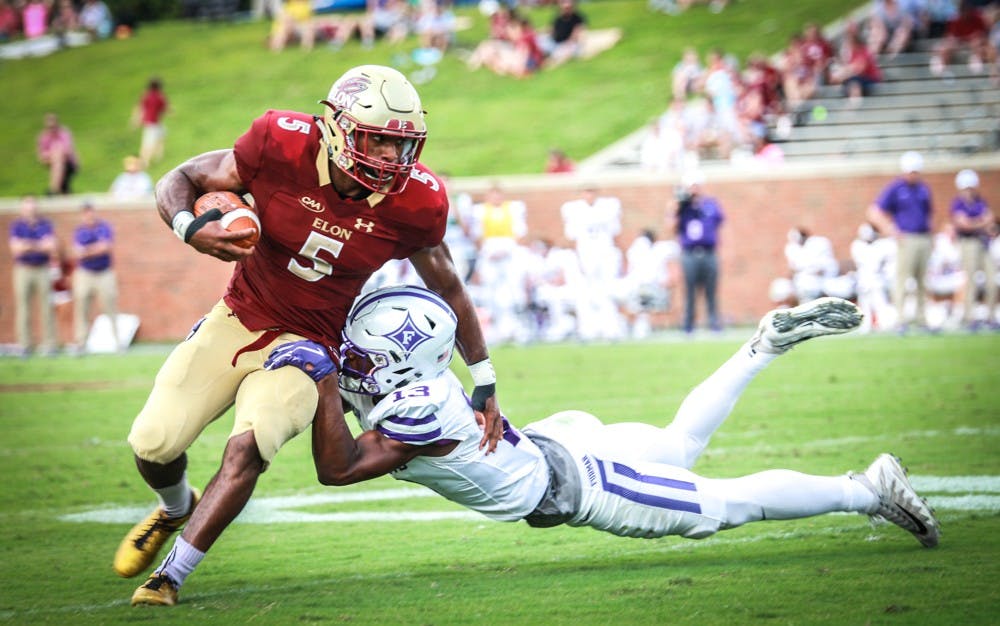 Running back Malcolm Summers carries the ball past Furman cornerback Quandarius Weems during the first home football game of the season [Abby Gibbs].

A few hours later, he continued scooping — this time it was on the football field, igniting his Elon University teammates who were starving to beat a familiar opponent.

And they did so handily, beating No. 21 Furman University (0-2) 45-7 in front of a packed crowd in Rhodes Stadium. To date, it’s the largest margin of victory in No.15 Elon’s NCAA Division I era against a ranked opponent.

On just the second play of the game, defensive back McAllister Ingram strip-sacked Furman quarterback Darren Grainger, forcing the ball to bounce on the left side of the field. Liggs immediately recovered the fumble and darted to the endzone for an 18-yard score. It was a frustrating start to a pummeling for the Paladins, who only produced 262 yards of total offense.

“We did a lot of really good things today, and I think that showed on the scoreboard, but the biggest thing is that we took a big step forward as a team in getting that decisive win,” said sophomore quarterback Davis Cheek, the 2017 Colonial Athletic Association Rookie of the Year. “We’re going to go back and assess it, fix what we can, and then move on to the next opponent.”

Producing a blowout is uncharted territory for Elon (1-1), especially considering last season. Senior running back Malcolm Summers even admitted it, chuckling when he said it “felt good to be up by a lot of points.”

Offensively, Elon excelled, scoring its most points in a game over the last five years. The Phoenix averaged 7.7 yards per play, passing for 195 while rushing for 275. The most explosive play came with eight minutes remaining in the first quarter, when Summers burst through the Furman defensive front untouched for a 54-yard touchdown.

“I just ran straight and scored,” Summers said. “It was like the Red Sea parting for me. I just split the safeties and said, ‘Alright, cool.’”

Last season, both squads traded a pair of games — Elon won 34-31 in September in Greenville, South Carolina, but lost 28-27 in the Football Championship Subdivision (FCS) playoffs at home.

This time though, things were different, with Elon controlling every phase of play. It forced three turnovers, with two players — Ingram and senior linebacker Warren Messer — tallying 11 tackles. Liggs said he and his teammates felt prepared heading into this game, knowing that familiarity with the opponent helped their confidence.

It was a stark contrast to last week, when Elon lost to the University of South Florida 34-14, a much larger Football Bowl Subdivision (FBS) opponent. Elon used a conservative game plan, starting the game with nine straight running plays before its first pass attempt was intercepted.

But with a passing touchdown and several large chunks of yardage being picked up through the air against the Paladins, Elon seems confident in the sophomore play caller.

“Davis is proving that he can put the ball right where they need to be and our guys can make the plays,” head coach Curt Cignetti said. “That was something that had to happen in this game, too, and it should develop more confidence going forward and more opportunities.”

And that mindset is continuing into next week, as Elon prepares to face the College of William and Mary. It’s the first time the Phoenix will play a CAA opponent this season, which many consider the toughest conference in the FCS. In total, six CAA teams were ranked in the top 25 last year. And Cheek knows the season is far from over after only two games.

“This is only the second game of the year," Cheek said. "Twenty-four hours after this game is done, we have to move on to William and Mary. The biggest thing is we have to take away the good things, take away the bad things, and just keep on building. The biggest thing is just we can’t take a step backwards. This shows what we are capable of, but we have a lot more in the tank.”