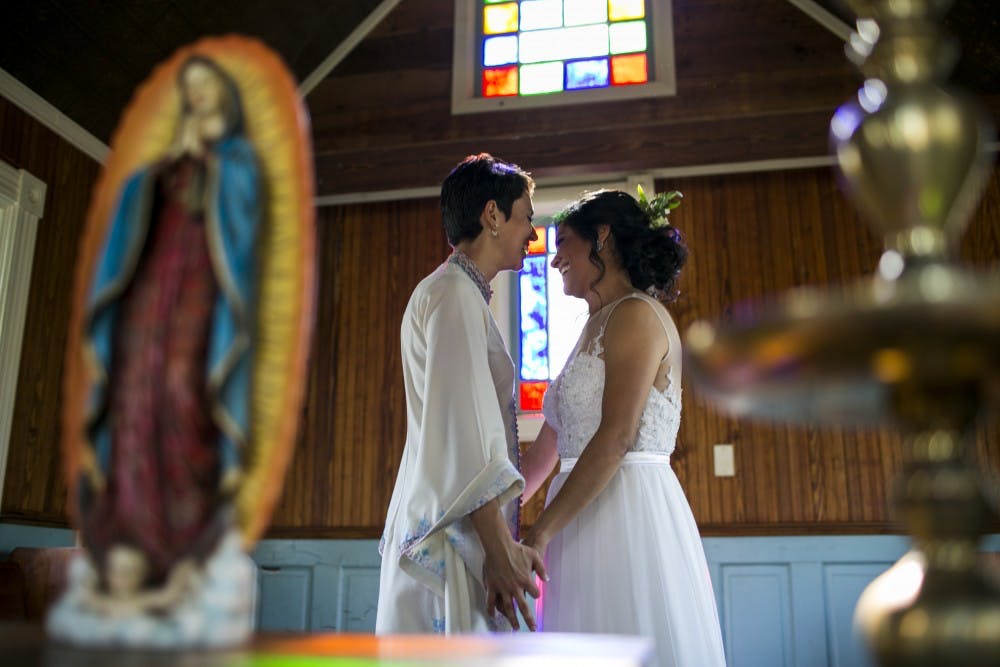 When coming to terms with her sexuality, folk-pop singer Gina Chavez would pray to God asking for answers wanting to know why she was attracted to women and whether it was good or bad.

Chavez would even conduct what she calls experiments to see what gender caught her attention in different places — from walking down the streets to concerts. She never imagined she would meet her now wife, Jodi Granado, at the University Catholic Center at the University of Texas at Austin.

With 12 years of being together and one year of marriage, Chavez’s new EP, released Sept. 14, titled “Lightbeam,” follows the couple’s journey together. It highlights them wrestling with their Catholic faith and how they have dealt with their relationship despite the hardships.

Chavez, who has 10 Austin Music Awards and an NPR Tiny Desk with more than half a million views, has topped the iTunes and Amazon Latin charts with her Latin folk-pop and award-winning album, ‘Up.Rooted.’ While Chavez is touring, recording and writing, Granado is a full-time high school teacher and Chavez’s manager.

“The Catechism of the Catholic Church” states that homosexual acts are immoral and contrary to natural law, and homosexual tendencies are disordered. Though the church does not consider homosexual orientation as sinful, there is a negative approach to it. Throughout the time they have been together, Granado and Jodi would offer up their relationship to God as Catholics and, in prayer, would ask God to separate their relationship.

“God was just fortifying our relationship and making it more beautiful,” Chavez said. “We finally decided we should stop praying it all to end and get used to the fact that this is a beautiful thing.”

What first started as a friendship led Granado and Chavez into a relationship they did not expect was going to flourish and grow to what it is today. Granado says that when they met, she was just getting out of a previous relationship.

“She was a source of strength,” Granado said. “But it was hard for me because I had just met this girl [Chavez] and we were very much in the Catholic scene.”

Chavez came to full terms that she was a lesbian at age 24. When she came out to her parents, she knew the great relationship she had with her parents was going to change forever.

“I did not want to think it was her [Jodi’s] fault,” Chavez said. “I remember thinking that even if this doesn’t work out then I’m still gay. I needed my parents to understand that this was outside of any person.”

While Chavez says her parents were understanding with her coming out, Granado says to this day her family says they struggle with her sexuality.

“I know who I am, and I’ve made peace with it,” Granado said. “I wanted to please [my parents] and make them proud. I finally came to the conclusion that it’s your cross to carry, not mine. I’m walking my journey in hopes that you can do the same.”

Starting conversation in the Catholic community

Chavez has attended St. Austin Catholic Church in Austin, Texas, for the past 16 years. When dealing with her sexuality, she sought guidance from priests and a nun who helped her come to terms with who she was.

“I was like, OK, a Catholic nun is asking me to discern my sexuality,” Chavez said. “She wasn’t judging me. She was telling me to talk to God about how I was wired.”

Both Chavez and Granado agree that the support from the community that they have received at their church is an essential part of why they are devout to their religion. Granado says that she is glad the conversation of LGBTQ+ members in the church is starting.

“In order for the church to change, we need to be educated,” Granado said. “We need people to educate us. We need people to stand there and not walk away. If you’re willing to stay in and fight, teach and go through the harsh with your community, we need more of that.”

After 11 years of being in the relationship, Chavez and Granado decided to get married last year. Gina said they chose to do it out of their love for each other and concern that the current administration could take same-sex marriage away. Chavez says that a priest who helped them plan their ceremony encouraged them to be a part of the change.

Chavez and Granado could not celebrate their wedding at their church since the Catholic church does not recognize same-sex marriage. This is something Chavez says made her angry despite her love for her faith and community.

“We should be able to shout from the rooftops that our relationship is just as worthy as a relationship between a man and a woman,” Chavez said.

Finding a middle ground with Chavez’s career while she’s on tour around the world has not been easy. Granado says that their commitment to communication has been a vital part of their relationship, especially when they have not seen each other for a while or things are not going well.

“The balance part is the crucial thing,” Granado said. “It’s really hard, and sometimes it gets very disproportionate at times. Knowing that I know she’s so talented and seeing her on stage kind of keeps me going.”

While Granado is grading papers and paying the bills at home, Chavez is touring around the country and world with her band. As a cultural ambassador with the U.S. State Department, she has been to more than 10 countries— from Jordan to Costa Rica and Kyrgyzstan.

Chavez says her new EP “Lightbeam” is snapshots of the journey she and Granado have
had together.

It has songs that deal with Chavez being in the spotlight from Granado’s perspective, Granado being lonely while Chavez is on tour, the love Chavez has for her wife, among others. The EP features more smoother tones than Chavez’s usual folk-pop style.

While Granado and Chavez try to balance their relationship, they also started a fund called Niñas Arriba based in El Salvador. This fund raises money to send young underprivileged girls to college.

Through their organization, being an openly lesbian couple in the Catholic church, managing their perspective careers and be embrace their Latin roots, Chavez and Granado bridge multiple communities.

“So much of our relationship at the beginning was hidden from everybody,” Granado said. “If we talk about standing in the light and coming out now, we are going to be proud of who we are and it's okay to love who you love and that you’re still the beautiful person you are meant to be.”