From a young age, this Elon student faced down daunting responsibility and turmoil 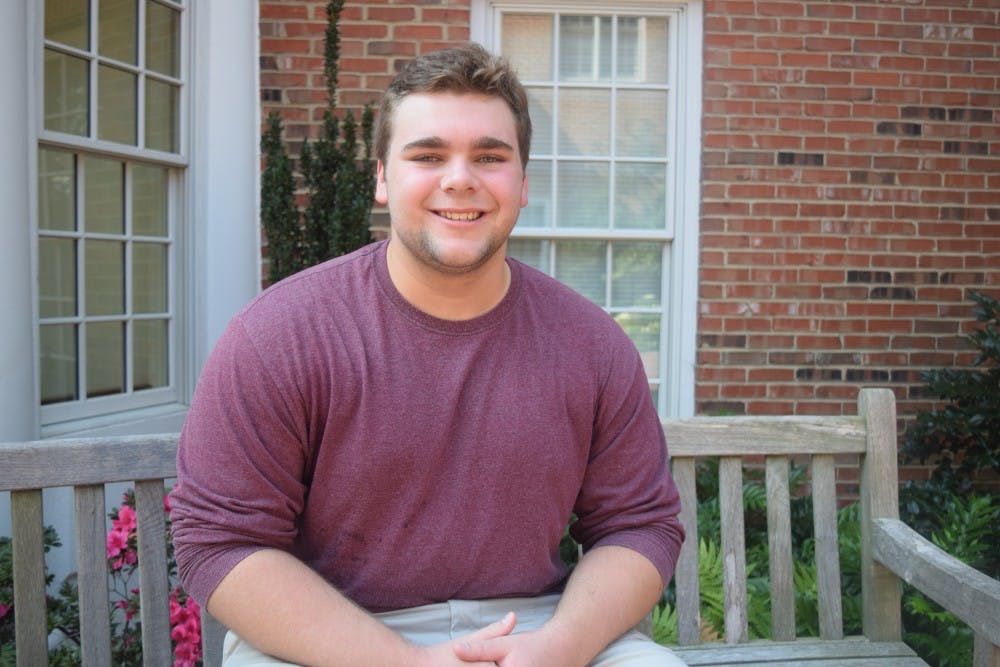 
Freshman Mason Curtis at the Meditation Garden by the Numen Lumen Pavilion.

Instead of being in kindergarten and learning the alphabet, Mason had to step up and care for his 2-year-old sister, Lillie Potter, and himself because of their mother's substance abuse issues.

In their trailer home in Boone, North Carolina, Mason felt obligated to care for Lillie while their mother, Suzanne Potter, would leave them alone for days or weeks at a time battling alcohol and drug use.

“I was going to try my best to help my sister out,” Mason said. “It sounds crazy even to me, but the love I had for my sister is what kept me going in that situation.”

Mason’s father, Richard W. Curtis, left him and Suzanne when he was only 3 years old. Mason says he could not move in with Richard since he was not financially stable enough to support him. Experiences like these affected Mason negatively in some of his mental, academic and social abilities. But they also helped him grow and become responsible at an early age. Mason never thought these experiences would help him become determined to better his life and overcome the hardships he was facing.

Twelve years later, he was accepted to Elon University, his top-choice school, as a part of the class of 2022 Odyssey Scholars Program. This is one of the most competitive and highly selective merit-based programs for incoming freshmen at Elon. This year, there are 38 new Odyssey Scholars.

“I am very surprised that I am here,” Mason said. “When I was a kid, the environment and atmosphere that I grew up in set me up for failure.”

Growing up in Boone

Because of Suzanne’s inability to care for him, by the age of 8, Mason had lived with his paternal grandfather, Richard F. Curtis, returned to Suzanne’s for a bit after she had been to rehabilitation and then moved in with maternal grandmother Beverly Church.

He describes his childhood as “chaotic.”

“I didn’t have the opportunity to go to school,” Mason said. “I was enrolled in an elementary school, but I couldn’t go because I was obligated to take care of my little sister.”

Every move for Mason meant a new elementary school and lifestyle. It wasn’t until 2009 when he decided to move in with his paternal aunt and uncle, Robin Curtis and Jim Alexander, in Atlanta. He considers this the best decision of his life besides coming to Elon.

“Everything skyrocketed from there,” Mason said. “They helped me to be the person that I am today.”

In the first five years of living in Atlanta, he heard from Suzanne twice through the phone and saw her once.

“I used to think that the drinking problem was because of me,” Mason said.

Mason said he had to learn to deal with the blame he was placing on himself that bothered him as he got older. During his freshman year of high school in 2014, Mason received a call from Church telling him Suzanne was in the hospital. She was critically ill with liver failure. After visiting multiple hospitals in the area, they all told her the same thing — she was going to die.

When Mason was allowed to see Suzanne, he was stunned. He recalls having an image of Suzanne from the last time he saw her. But this time, that image was completely different.

“Seeing her in that condition was terrible,” Mason said. “When I saw her in the hospital, she was jaundice and bloated.”

Fortunately, Suzanne was able to recover. As she strived to get healthier again, Mason became more involved in his high school baseball team. He also decided to begin improving his grades. He went from a 2.9 GPA as a freshman and raised it up to a 3.45 by his junior year.

Mason’s drive to improve his academics stemmed from the motivation from Robin and Alexander and from his decision to make change.

Mason first heard of Elon when one of his cousins first toured the school. He recalls skimming through Elon's website during his college search and being amazed at the photos of campus and the business school. After learning more about the school and its programs, he made Elon his first choice and applied Early Action, knowing he would struggle to afford it.

Shortly after submitting his application, he attended an Elon admissions event in Atlanta where Courtney Vaughn, assistant director of diversity recruitment, told him more about the school.

“Courtney Vaughn drove it home for me,” Mason said. “The alumni and parents explained Elon in such a way that drove me to come here.”

During the presentation, Mason noticed the information about the Odyssey and Fellows programs. There was a slide that included information of who was eligible to apply for this program. Some of the points included being a first-generation college student, having achieved success despite hardship or challenge and bringing cultural or socioeconomic diversity to Elon. These points and his conversation with Vaughn drove Mason to apply and go through the Odyssey application and interview processes.

“When I got that acceptance call in March,” Mason said, “it was completely life-changing.”

After being admitted to Elon and attending Rising Phoenix Weekend, Mason met some of the current Odyssey Scholars and quickly realized that was a group of people he was glad to be a part of.

“It felt like family,” Mason said. “I really wanted that feeling. I just didn’t want to go to a university and be a number. I wanted to be a part of something.”

Before Move-In Day and orientation, Mason attended Odyssey Week. This is a week for the scholars to get to know campus, the other scholars and assist with their transition to college through receiving mentors. Junior Nick Moon is Mason's mentor and Moon has already begun telling him about organizations and clubs that fit Mason's interests.

"Odyssey truly values a family-like atmosphere," Moon said. "Everyone develops a strong bond with each other during that first week."

For Moon, Mason is one of the nicest people he has met at Elon.

"Mason truly demonstrates compassion and generosity," Moon said. "The thing that sets him aside from others is that he wants to help people and will put others' happiness before his own."

The day after Mason graduated from Druid Hills High School in Atlanta in 2018, he was notified Suzanne was in the hospital again.

Mason’s last phone call with Suzanne was about eight months before when he found out she had been charged with a DUI. Mason said she drove off the road with younger siblings Lillie and Max.

“My last phone call with her was me not being her son, but me trying to help her,” Mason said. “But it was like firm love.”

Mason says he reminded her to stop drinking and to focus on raising his siblings, but he knew that decision was ultimately up to her. Though he hadn't seen her in years, he remembers she was bubbly and social.

"My mother was always giggly and would call me 'mister man,'" Mason said. "She had something about her that was amazing."

Suzanne died May 28, 2018, of liver failure attributed to alcoholism.

Mason traveled back to Boone for a celebration of life for his mother in June where he saw his siblings who he hadn't seen in years. Suzanne's loss was tough for him and his family. As he is still undergoing the grieving process, he says that coming to terms with her death and his childhood experiences make him feel at peace.

Suzanne's passing has led Mason to a lot of reflection and finding value in communicating with others.

“I really value communication because my lack of communication with her really upset me,” Mason said. “I always extended my hand out to her, but she didn’t receive it.”

In addition to communication, Mason values his opportunity to get an education even more now. Suzanne did not go to college; Mason believes if she had higher education she probably would have made different decisions in her life. This is one of the reasons Mason has become so determined to take advantage of the opportunities Elon can provide him.

“The loss of a loved one can also advance your persona,” Mason said. “I don’t plan to be idle here at my time at Elon. I’m as motivated as I’ve ever been.”