From the many stories shared, one thing stood out: that Downey’s infectious positive attitude would make everyone he met feel welcomed, no matter who they were. 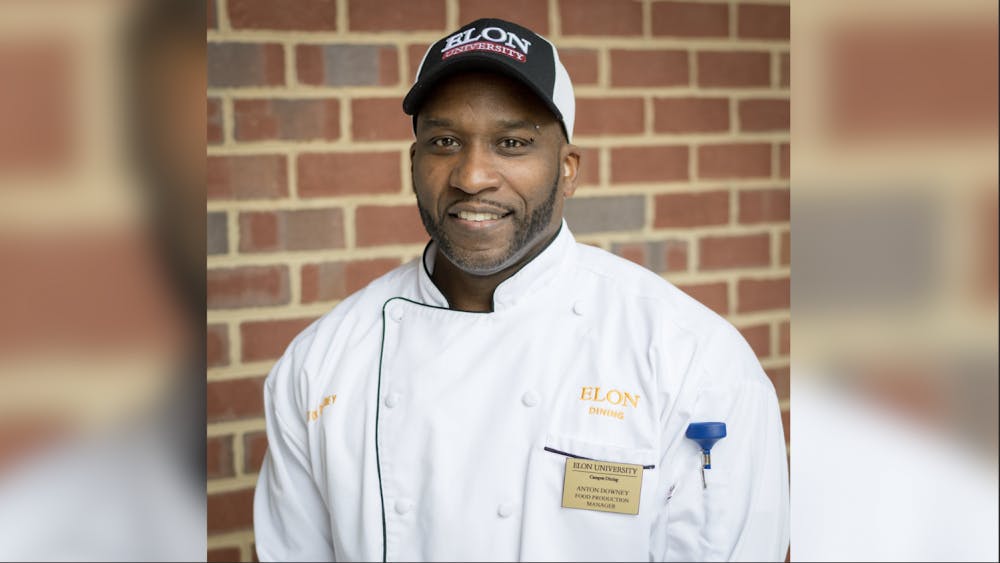 Anton Downey worked at Elon for 18 years as a dining services employee. He started as hourly cook at Varisty and worked his way up to becoming a Chef de Cuisine in Clohan Hall, a salaried managerial position.

His laugh. His jokes. His big, goofy grin.

These are just a few of Anton Downey’s traits the community shared Monday, celebrating a life in light of his death.

Downey was killed in a drunken driving incident early Saturday morning. He is survived by his sisters Adawn and Cassandra and his 17-year-old daughter Nautica.

In wake of the sadness, his family, friends, students, coworkers and bosses came together Monday morning to remember his life at a gathering of friends in the Numen Lumen Pavilion.

From the many stories shared, one thing stood out: that Downey’s infectious positive attitude would make everyone he met feel welcomed, no matter who they were.

From the beginning, Downey’s older sister, Adawn Downey, remembers he was quite the prankster.

“He was always putting hot sauce on my plate, and I didn’t know any better, so I ate it,” Adawn said. “Jokes on him because I guess that’s why I started to like it so much.”

Downey was also a stubborn kid. Adawn said he would never tap out when they got into wrestling matches, no matter how badly he was getting beaten. And he was always trying to experiment with their toys.

“I remember when I got Barbie dolls he wanted to cut the Barbie dolls' hair,” Adawn said. “We did a cut and style, but that hair never grew back. So I went around with Barbie dolls with these jacked-up haircuts.”

That childhood bond stayed strong through their whole lives.

“We were always close-knit,” Adawn recalled. “He never gave bad advice, he spoke real from the heart. Whether it was tough love or whatever, he gave it to you straight.”

Downey’s younger sister, Cassandra Dark, wasn’t around for many of the childhood shenanigans but said he was there for all of her major moments growing up. He saw her graduate high school, pinned her badge on her upon completing the police academy and was accidentally locked in the room when she gave birth to her first child.

“He got stuck in there. My water broke and he tried to get out, but I was like, 'oops, too late,'” Dark said.

But Downey didn’t seem to mind. “He was always putting other people before himself, and he never told you no.”

A positive light in the Elon community

Downey started his Elon dining career as a paid hourly cook, and worked his way up to a salaried managerial position, always serving food with a smile.

“I would walk in and he would say, ‘Gotta have a smile! Smiling’s gonna make the day better,’” said Laura Thompson, the district manager for Elon dining and one of Downey’s supervisors.

For Peter Ustach, who graduated from Elon in 2009, that smile was just the beginning of a beloved friendship. Ustach feels like he didn’t immediately fit in at Elon, but during a particularly difficult transition Downey was one of the first people to make him feel comfortable and welcome.

“Anton took it upon himself to remember my name and have discussions with me in line,” Ustach said. “I reached out to him quite a bit and would visit a specific location because I knew he would be there.”

Elon dining employee Alex Zimmerman remembered Downey made friends with students, coworkers, bosses and Physical Plant employees with no limit to his love. “Relationships were his thing,” Zimmerman said. “Anybody he ran into, he was going to be friends with them.”

Thomson said that’s why he was such a good manager as well. “His employees were his passion. He was always high-fiving them, hanging out with them and working next to them.”

Ustach ended up working at the Fat Frogg alongside Downey after graduating from Elon. He said Downey could even bring morale up after the longest of work days.

“Everyone was just burnt toast, ready to strangle everybody. It’s been a long day dealing with tons of people who are intoxicated,” Ustach said. “But at the end of the night, no fail, Anton’s smile would make you go from being, 'ugh, I’m ready to get out of here,' to being like, 'that was fun tonight.'”

No matter what, Downey’s positivity spread. “His personality, it’s larger than life,” Ustach said. “Just this guy with dreadlocks who’s having fun while he’s working, and that’s infectious.”

“I guess you never recover, you just have to move forward, and I can’t put a timeline on when it will get better,” Adawn said.

From working 12-hour dining shifts together, Zimmerman said Downey became a part of his family, too.

“You get to know everybody you’re working with real well, and they may not be blood, but they’re still your family,” Zimmerman said. “It’s been a really tough few days.”

Elon students started a GoFundMe to support the family, which has already raised more than $14,000.

Jason Thomas, the current owner of The Fat Frogg, is organizing a benefit concert on Father’s Day, June 17, and all donations will go towards supporting the family. In the long term, Thomas hopes to start a scholarship fund in Downey’s name.

In the wake of the tragedy, we can still take a lesson from Downey's life.

“If we can all learn one thing from his passing, it’s that giving hugs and smiling means more than anyone could ever imagine,” Ustach said.